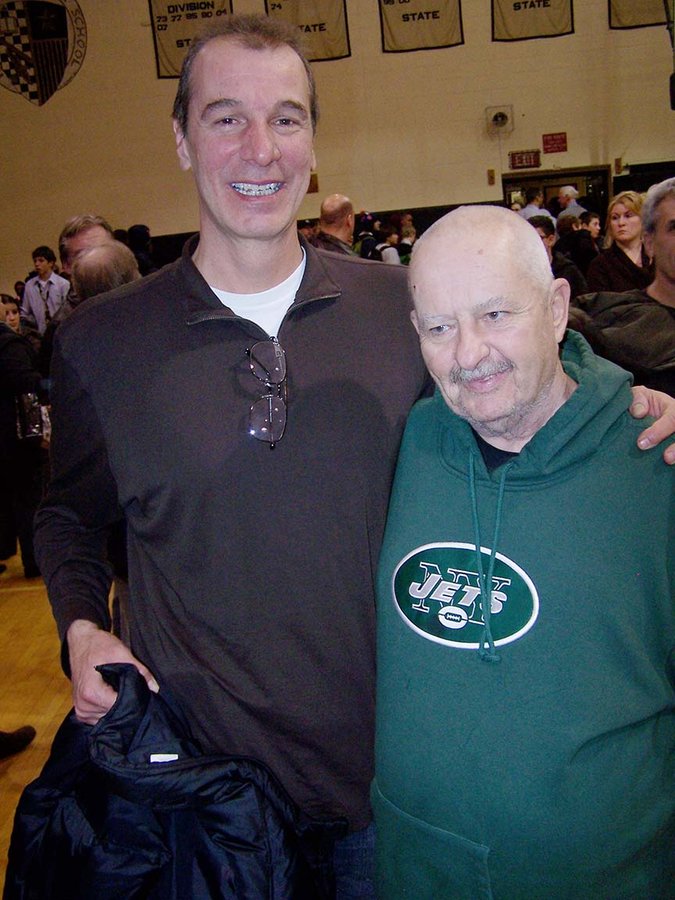 After 25 straight weeks of writing about the Top 25 characters in the Hudson County sports world over the last 25 years, we have come down to No. 1 on the list.

And is there any question as to who that might be?

Of course, No. 1 of all local sports characters is the late Ed Ford, known affectionately as “The Faa.”

“Faa” was a character all to himself. With the ever-present chewing tobacco and rough, gravely voice filled with expletives, “Faa” was borderline cartoon character and living caricature all in one. He was larger than life with his sports column, first in the Hudson Dispatch and later the Jersey Journal, making it the single most must read in the county. Everyone flocked to the paper daily to see what Faa had to say.

When he died in 2011, I was asked how to describe our relationship. I honestly didn’t know how. We were at each other’s throats at times, yet most conversations ended with “I love you.”

We were friends and colleagues, then we were rivals and antagonists. We had a coach-to-player, then colleague-to-colleague, then rival-to-rival, then employer-to-employee relationship, but were always friend-to-friend for more than 35 years.

There are endless stories that could be written about us and our friendship. A lot of people in Hudson County believed that we were one and the same.

So it’s hard to limit it to just a few paragraphs. We all have to be rest assured that there was one and only “Faa” and he sits atop this list with no peers and no parallels…

Suppose someone threw a soccer game and no one showed up. Would it count?

The game was played with the Marauders falling, 3-0. But there were no Prep student fans/followers in attendance.

So at 10 a.m. Monday morning, when the plans were finalized to play the St. Peter’s game at Seton Hall University, the university decided to inform St. Peter’s Prep that students were not going to be permitted on the campus for the game.

But St. Peter’s Prep already had approximately 150 students signed up to attend the game via bus.

“It wasn’t fair, but it was Seton Hall’s home game,” St. Peter’s Prep athletic director Rich Hansen said. “They weren’t allowing Seton Hall students either. Seton Hall told them that they didn’t want any students there. It was their home game. At that point, we couldn’t move the game. I feel bad for our parents and students. It was difficult to deal with.”

“I was a little disappointed for our student section who wanted to come to the game,” Jantas said. “But it was Seton Hall’s home game. Our team was prepared and ready to play. Certainly, I know our fans wanted to come and support us. We just tried to focus on the job at hand.”

From a personal standpoint, it was dead wrong to have that game played where they didn’t want students. The St. Peter’s Prep students didn’t have to suffer because there was a fight there Friday.

The administration at Seton Hall Prep had all weekend to determine where they could play that game fairly – with fans in the stands watching. Either West Orange High School, where the Pirates are playing home football games, or Kean University or nearby Monte Irvin Field in Orange could have sufficed.

Or they could have moved the game to Caven Point Cochrane Stadium, where the Marauders play their home games. It has been done before, moving sites to accommodate those with inappropriate fields.

Keeping the St. Peter’s students away was uncalled for and wrong. They didn’t do anything wrong.

Or Seton Hall Prep could have paid off-duty police officers to act as security personnel for the game at Seton Hall University.

So now it’s time for the old wide one to make his 2016 debut. Yes, the soothsayer supreme, the magical forecaster with turban and wand, the Great Hagueini has arrived in time for the NJSIAA state football playoffs. Hagueini will select every round of the state playoffs, as long as a local team is participating.

So without further ado and remember, don’t use Hagueini’s selections for any wagering unless it’s for a corned beef hash on rye toast and a Snapple peach iced tea with your Uncle Looie.

Brearley Regional at Hoboken, North 2, Group I, Friday night, 7 p.m.: The Kenilworth school has a great history in the state playoffs, but they haven’t come to the Mile Square City for Wilden Germain and Friday Night Lights. Hoboken 28, Brearley 7.

Clifton at Union City, North 1, Group V, Friday night: Up on the roof, up on the roof…can’t you hear the Drifters singing. Maybe even James Taylor. But in this case, it’s all Harrison Fernandez and the Soaring Eagles’ stifling defense. Union City 21, Clifton 0.

Delbarton at St. Peter’s Prep, Non-Public Group 4, Friday night: The Green Wave is all banged up with injury. Johnathan Lewis has returned from injury and is leading the Marauders again. It’s all St. Peter’s here. St. Peter’s Prep 42, Delbarton 14.

Immaculata at Hudson Catholic, Non-Public, Group 2, Saturday: After tough losses to Delbarton and Pope John, the Hawks are ready to soar again in this one. Hudson Catholic 28, Immaculata 7.

Bayonne at Westfield, North 2, Group V, Saturday: The Bees have had a tremendous first season under new head coach Jason Acerra. But this is where the fairytale ends. Westfield 28, Bayonne 12.

Raritan at Lincoln, Central Jersey, Group II, Saturday: The Lions and Kamani Addison are misplaced in this section, but it doesn’t mean they can’t win. Does Raritan even know how to get to Caven Point, which will host three playoff games this weekend? Lincoln 36, Raritan 12.

St. Anthony at Mater Dei, Non-Public Group 2, Saturday: The Friars have to be happy to be part of the state playoffs, after facing one of the easiest schedules known to man. Still Bernard Shivers and Khalil Vance will make things interesting, even if they have a two-hour bus ride ahead of them. Mater Dei 35, St. Anthony 28.

We will have more playoff picks next week…-Jim Hague