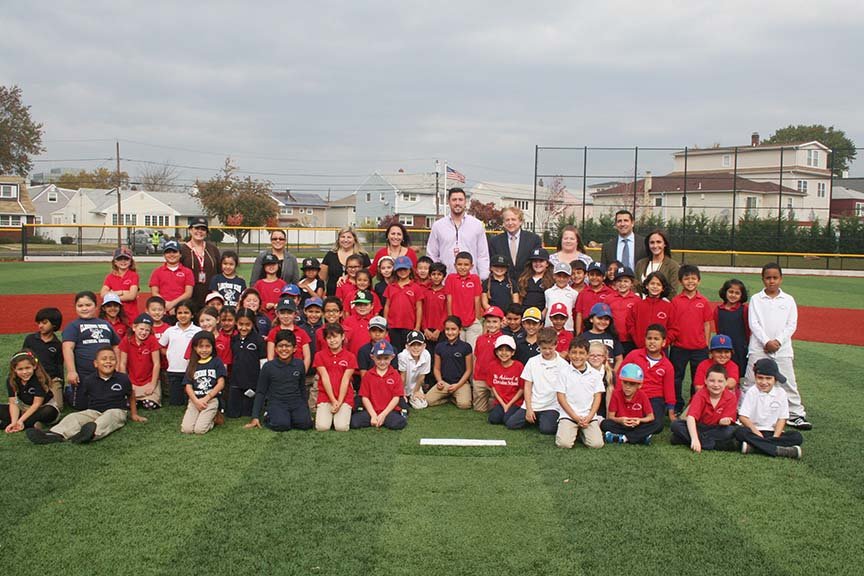 Ashley Herrmann is a second grade teacher at Secaucus’ Clarendon School. Recently, the faculty at Clarendon got together to discuss the possibility of having visitors with interesting jobs coming to speak to the students.

You see, Light has a very interesting job. He’s a pitcher with the Minnesota Twins.

Light also happens to reside in Hoboken during the offseason with his sister. Light was supposed to be living with his brother Sean as well, but just a few weeks ago, Sean Light was appointed as the assisted strength and conditioning coach for the Los Angeles Lakers of the NBA.

But Ashley Herrmann was pleased to be able to recommend her sister’s friend as a class speaker.

“He could speak about hard work and determination and how much he needed both to become a major leaguer,” Herrmann said. “Once I asked my sister, it was all up to Pat.”

Needless to say, with the baseball season now over and the Chicago Cubs are the World Series champions – believe it or not – Light has some free time.

Just think about it. Five years ago, when the Cubs were the worst team in baseball, did you ever think that you’d say that the Cubs would be world champs and the host of Celebrity Apprentice would be the president of the United States? Just goes to show you anything can happen.

Five years ago, Light, a native of Colts Neck, was a pitcher for Monmouth, hoping he would get drafted again, like he was by the Boston Red Sox out of Christian Brothers Academy in 2008, but chose not to sign a contract.

Light’s gamble paid off, as the 6-foot-5 right-hander was drafted by the Red Sox in the first round of the 2012 draft, the 37th pick overall.

After he was traded by the Red Sox to the Twins last August, Light was going to get his chance to remain in the big leagues.

And now, Ashley Herrmann was going to bring this big leaguer to Secaucus.

“We were beyond thrilled to be able to get him,” Herrmann said.

And Light was thrilled to be speaking to the kids.

“When Brittney called me, I didn’t give any thought to it,” Light said. “Any time you can give back to kids, you do it. It’s a great thing. I remember when I was a kid. I would have loved to meet a big league ballplayer. I never got a chance. It’s very rare to have a Major League Baseball player come around and go to a school.”

The children of Clarendon did their research about Light before he arrived, finding out what team he played for, what position he played, where he was from.

“I was hoping that they didn’t find out my ERA [earned run average],” Light laughed.

For posterity, the ERA will be left out of this report, although it can be reported that Light pitched in two games for the Red Sox last April, was traded to the Twins in August, and saw action in 15 games as a reliever with the Twins.

The students at Clarendon were ready with their questions for Light and they asked some really good ones.

For instance, 7-year-old Boula Christopoulos asked Light if he was nervous before pitching in his first big league game.

“I remember the little girl asking that question,” Light said. “And I was extremely nervous. I came in during the ninth inning and I was relieving David Price [the Red Sox’s ace left-hander]. That question blew me away.”

Boula, who said she’s a Mets fan, was happy to say she met Light.

“I’m glad I met Pat Light,” Christopoulos said. “I got to know him a little. It feels awesome. I will follow him now, no doubt. I will root for him.”

Although she’s only in second grade, Christopoulos knows what she wants to do when she grows up.

“I want to be a teacher,” Boula said. “I don’t go to many baseball games, but now I will try.”

Harshan Ramchandani is also seven and a second grader. He asked Light what made him follow his dreams.

“That was another great question,” Light said. “I remember being in second grade and someone asked me what I wanted to do. I said I wanted to be a Major League Baseball player. I never thought I would be able to make it happen.”

Ramchandani is a Yankees fan. This class has to work on getting kids with last names like Smith and Jones.

“He was a nice guy,” Ramchandani said. “He gave me a ‘High-Five,’ but I had to jump high to touch his hand. He was really great. He made me want to root for the Twins. It was a lot of fun.”

Herrmann was so touched by Light’s likeable demeanor with the kids.

“Not only did they get to meet him, but they learned a little bit about him,” Herrmann said. “They read his biography. Just the experience of seeing this big man walking into the classroom was impressive. He had to duck to get into the door. The kids loved that. The kids were blown away. You couldn’t believe their excitement with someone of his level coming into their classroom. It was amazing to have it happen. For me, it was an overwhelming feeling. It was incredible how the kids were so well behaved. I think we were all overwhelmed by his presence.”

Light was also “blown away” by the whole experience.

“It was almost surreal for me to be the one they asked to come in and speak,” Light said. “It was awesome. I remember looking up to baseball players when I was their age. If I didn’t make it, I don’t know what I would have done. I didn’t know anything else.”

“I know I still have so much to learn,” Light said. “I now have something I can build upon. Once you pitch in the big leagues, things change. It’s a whole another level. There are so many things I can improve on.”

Except for dealing with second graders, because Light is already an All-Star there. Just ask the second graders at Clarendon School. They know.