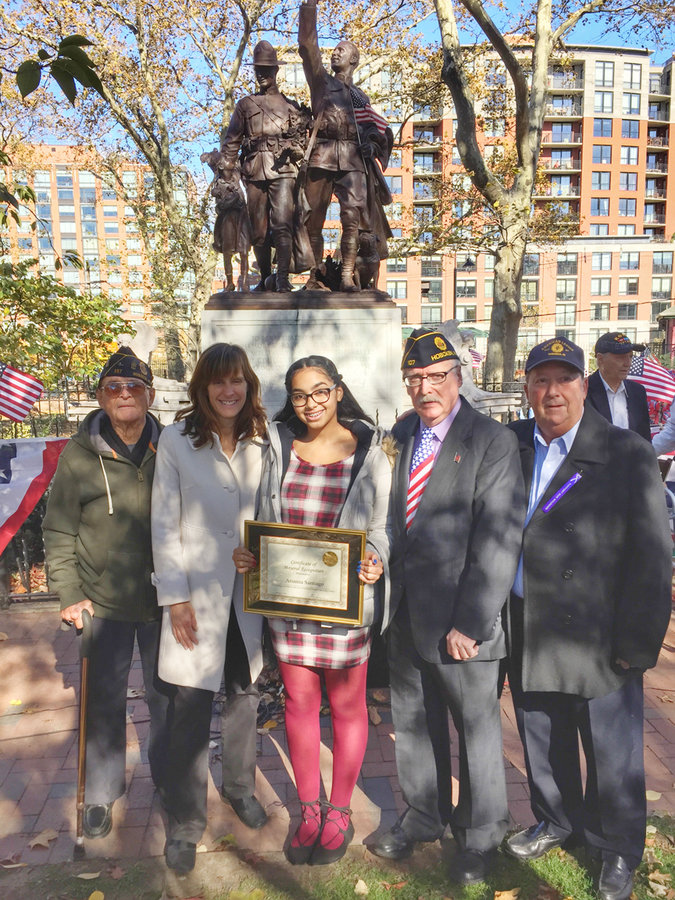 Liberty Realty’s Paris Branda, Hoboken native, represented the buyer in a $17 million deal last month that will turn 728 Clinton St., the site of the long-closed Wonder Bread Factory, into the “Wonderlofts.”

According to a press release from the real estate company, “The landscape of Hoboken changed over the years from rows of manufacturing sites to the location of desirable homes, businesses, and restaurants. Now Liberty Realty is preparing to offer 68 luxury residential units and 2,375 square feet of prime retail space in the center of Hoboken, attracting the most discerning buyers. The Wonderlofts, as the building will be known, will marry the original structure and character of the Wonder Bread Factory with the modern composite metal panels and large windows. Residents will experience only the finest luxury when enjoying a sandwich at the Wonderlofts, and they’ll feel right at home doing it.”

Zimmer and Carey recognized Santiago at the annual Veterans Day ceremony at Elysian Park and presented her with an official proclamation. Nicole was unable to attend due to a school conflict and will be recognized at her school next week.

“Veterans are more than just forgotten battle heroes or something to think of sympathetically for a moment, only to return to your daily lives a second later,” wrote Santiago in her essay. “They’re mothers, fathers, brothers and sisters, sons, daughters, husbands, and wives. They are people; ordinary people doing something extraordinary for the sake of people they don’t know.  And I happen to be lucky enough to personally know one.”

“We owe a debt of gratitude to veterans and their families who sacrificed so much for our country,” said Zimmer. “Today is a day to say ‘thank you’ to those who served, but the true measure of our respect for veterans is in our actions, not our words. A country that truly honors and values their sacrifice cannot tolerate our veterans being homeless, hungry, unemployed, or suffering from the invisible wounds of war. I thank all the school children for their wonderful Veterans Day essays and congratulate Nicole and Ariana.”

Local authors will come together to read midlife dating stories

Symposia Bookstore, at 510 Washington St., will host an evening of readings of real-life wacky, weird, and wonderful stories from people who are over 40 and dating.

Local authors Eileen Budd and Rose Jakubaszek will  read selections from their upcoming book, Can You #!*% Believe What Happened? True Tales of Midlife Daters. Readings will include stories like these: A woman who’s looking for love – and a bathroom. A man whose first date is more Jurassic Park than a walk in the park. A Wall Street guy looking for a back door deal.

Readers will also include fellow Hobokenite Ann Anderson Evans, who’ll be reading her story from the book about what it was like to dip her toes back into the dating pool as a midlife dater. Ann has published a memoir, Daring to Date Again, and is working on her second book. There will be other special guest readers as well.

Admission to this event is free. Light refreshments will be served, and everyone attending will have a chance to win prizes in a raffle that will be held at the end of the evening.

For more information, send an email to: datingover40tales@gmail.com.

From Nov. 30 through Dec. 18 the Mile Square Theatre will perform “It’s a Wonderful Life: A Live Radio Play.” According to a press release the theatre space will be “transformed into a 1940’s radio studio, the audience is transported to the golden age of radio, as cast members from radio station WMST perform Frank Capra’s classic holiday tale of individualism, optimism and community.”

“We are thrilled to bring back this production to celebrate the holidays in our brand new theatre,” said MST Artistic Director Chris O’Connor. “Our audiences having been asking us to revive this show for years so they can return to their tradition of bringing their families and loved ones to MST for this holiday treat. In this current age of cynicism in America, we are so happy to bring back a production that affirms who we can be as a community.”

General admission is $30 and $18 for students and seniors.

Econsult Solutions, an economic consulting firm working with KMS Development Partners (KMS), the company behind the proposed plan to build a new Hilton hotel on the US Postal Service property on the south end of Hoboken’s waterfront, has created a report on the economic impact of the proposed waterfront hotel.

A press release stated the hotel would generate $1.7 million in taxes to the city and school district, support 120 Hoboken jobs, and generate $21.4 million annually in the City of Hoboken in the form of total expenditures generated by guests spending outside of the hotel and ongoing hotel operations.

“The hotel will not only create a much needed option for families and their visitors but will have a significant positive impact on the Hoboken economy without requiring additional services or adding burden to the school district. The hotel trash would be picked up by a private contractor and the hotel adds no children to the schools,” said KMS Principal Dennis Martin.

“The city’s 2016 budget was approved earlier this year with an increase of about $3.6 million. The approximately $1.29 million that a new Hilton Hotel would generate to the city in the form of real estate and hotel tax would offset about 36 percent of the city’s total budget increase,” stated Martin in the press release. “That same $1.29 million would pay the salaries of 14 police officers in Hoboken. The $415,399 of annual taxes generated for Hoboken’s school district could pay for the salaries of six teachers. All this from a property, as a federal property, that pays no taxes to the city or school district today.”

For more information on the economic impact of the hotel go to the report at http://hobokenwaterfronthotel.com/wp-content/uploads/2016/11/11.7.16-Econsult-Data-Summary.pdf

Still seeking information on an unidentified woman in Hoboken hospital

The woman is believed to be homeless and may have lived in North Bergen at one time.

Cruz said that police officers have asked local residents and homeless if they know her but unfortunately they don’t have additional information and typically respond with “I have seen her before, or I recognize her,” said Cruz.

Many Hoboken residents received a “robocall” from Mayor Dawn Zimmer on Nov. 6 in which she endorsed the school board slate Forward Together. Apparently, her City Hall number showed up as the identifying phone number, rather than a campaign office number. The company who handled the calls, Global Marketing Research Systems (GMRS), said the identifying number was a mistake, the call was paid for by Zimmer’s campaign fund, and no City Hall resources were used. The call was neither recorded at nor sent from City Hall, they said.

A paid campaign consultant for Zimmer, Rob Horowitz, said in a press release sent out via email that it was merely a mistake.

The release quoted Chris Stella, a senior research project director for GMRS, as saying, “We mistakenly secured the phone number through a Google search, confusing the Mayoral Facebook page for a Campaign Facebook page. We are sorry for any confusion we created.”