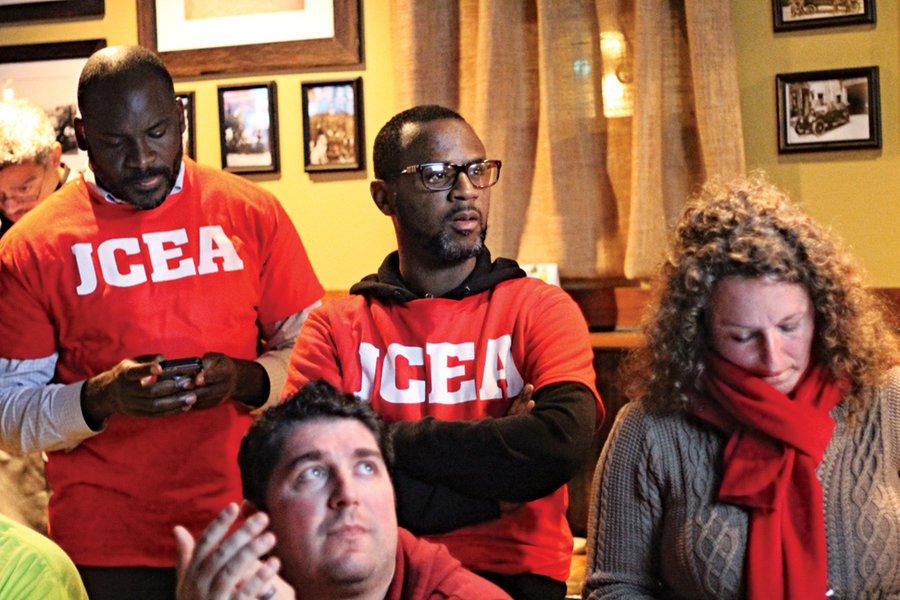 An upset win by Chris L. Gadsden over incumbent John J. Hallanan III in a Ward B special council election combined with a split decision on the school board election may spell trouble for Mayor Steven Fulop going into next year’s municipal elections.
Gadsden with 2,164 votes upset Hallanan who had 1,874 votes. Lekendrick Shaw came in third with 595 in what some see as a critical test of Fulop’s ability to hold together his political power on the West Side of Jersey City going into his reelection next near.
Fulop currently has a seven to two majority on the City Council. Gadsden’s election and the departure of Ward F Councilwoman Diane Coleman to become county register mean that Fulop will possibly go into the new year with a bare majority.
Worse for him is the fact that voters approved a referendum moving the municipal elections from May to November, giving his opponents more time to raise money.
Although Fulop initially proposed the change last year, claiming it would bring out more voters in the municipal election, critics said he was using the change to allow him to run in the democratic gubernatorial primary next June and if he lost, to run for reelection as mayor in November.
But insiders in his administration believe an earlier election benefited Fulop’s reelection chances rather than a later one, and a quiet campaign behind the scenes started to encourage voters to vote down the referendum.
State Senator and Union City Mayor Brian Stack sent armies of political workers opposing the change into Jersey City Heights in the run up to the election, apparently at Fulop’s request. But a number of political associates, such as Ward E Councilwoman Candice Osborne, continued to push for change. The passing of the referendum, which might have been seen as a victory earlier this year, becomes yet another loss for the Fulop political machine.
Voters approved two referenda, one moving municipal elections from May to November, 16,035 to 11,748, and a second to establish a city open space trust fund, 15,317 to 10,120.

Ward B litmus test for Fulop

The Ward B special election pitted three relatively strong community leaders against each other: Shaw, Gadsden and Hallanan.
Support from Fulop and Freeholder Bill O’Dea should have carried Hallanan back into office, but several former members of Fulop’s 2013 successful campaign team worked for Gadsden, suggesting a fracturing behind the scenes in the Fulop camp.
Gadsden was also a really good candidate, articulate and knowledgeable, able to bring out his message to people on an emotional and intellectual level.
As a local high school vice principal, he had a significant base of voters that more than made up for the usual political organizations.
“I’m encouraged by the outpouring of people,” Gadsden said. “It was a great day. I’m riding out cloud 9.”
He said he adopted the role of an advocate for the community and that people responded. But after six weeks of campaign, he said he is a bit physically and mentally worn.
But he said he is aware of how as an African-American councilman, his election to Ward B is historic.
“I know this is a blow to Fulop. Nobody expected it,” he said.
His victory is about his relationship to the people in the community and how he engaged them.
“I let them know people have options and I offered them a quality of leadership. Our ward needs a community advocate,” he said.
As for the future, he said he’ll know more about what he’ll do in his role after he had talked more with the community and developed an outline of needs.

Board of Education race shifts board power

The Board of Education election was overshadowed somewhat by next year’s municipal election.
On the surface, Fulop appears to have lost steam because he could not bring in the full slate of candidates running on the banner Education Matters.
Two of its three candidates were elected, with Angel L. Valentin leading a field of ten candidates with 16,308, followed by his running mate, Sudhan Thomas with 16,033. Coming in third with 13,534 was Luis Felipe Fernandez from the competing ticket, Jersey City United.
Education Matters’ third candidate, Gina Verdibello came in fourth with12,815.
Although Fulop endorsed Education Matters, insiders say he may have privately worked against Verdibello, who received some campaign support from Fulop’s mayoral challenger, Bill Matsikoudis.
Fulop and Matsikoudis are currently the only two declared mayoral candidates in next year’s election.
Gathered in O’Leary’s Publik House on Garfield Avenue in Jersey City, Education Matters candidates and supporters quietly celebrated their victory, while offering Verdibello words of comfort.
The victory of Valentin and Thomas shifts the balance of power on the board to a group that is largely opposed to current Superintendent of Schools, Dr. Marcia Lyles.
While Education Matters candidates tended to play this aspect down, promising to work with Lyles in the future, at least one of the current trustees, Lorenzo Richardson, is still in the midst of a legal battle, trying to reverse a controversial renewal of Lyles’ contract last year.
Richardson said this year’s board election was about having the right people on the board.
“We need people who are trying to help children as their primary job,” he said. “We need to focus on that.”
With his voice hoarse from campaigning, a jubilant Valentin, who returns to the Board of Education after having served previously from 2002 to 2014, said he intends to move ahead with the agenda that he and his team campaigned on.
He said he will be seeking to establish a broader range of educational choices, not just preparing all kids to go to college. He said he hopes to establish programs that would provide students with opportunities in various technology industries and in the more practical arts, such as carpentry, electrical science, and plumbing.
“We need to get involved with the kids and the community,” he said.
Ron Greco, president of the Jersey City Education Association, the union that represents the teachers, said the goal of the election was to get members onto the board that will focus on the needs of the kids rather than political disputes.
“We started planning for this election many months ago,” he said. “There about three of us and we threw around some ideas. This election is about bringing back decorum to the board and a focus on the kids.”
The Board of Education has often been a battleground, with conflicted board members arguing until midnight over what Greco called petty issues that did not involve the needs of kids.