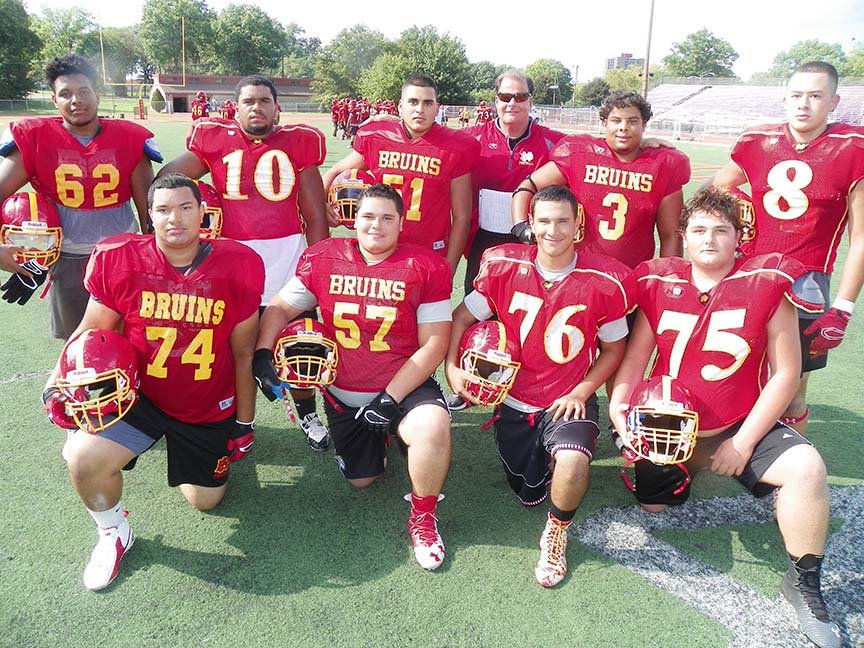 It was a late summer afternoon and there were different sounds coming out of Bruins Stadium and Vincent Ascolese Field inside North Hudson Braddock Park.

As one approached the field, the music got a little louder and it was so recognizable.

Blaring on the public address system was Marvin Gaye and Tammy Terrell doing their immortal version of “Ain’t No Mountain High Enough.”

After Marvin and Tammy were done, the next song was The Temptations and “Ain’t Too Proud To Beg.”

Yes, the sweet sounds of Motown above a high school football practice.

It was definitely a sign of the changing times with the North Bergen High School football team, now led by coaching warhorse Mike Guasconi, who at 62 instantly becomes the oldest head coach in Hudson County.

Guasconi, who rescued the Weehawken football program from obscurity about 15 years ago, spent the last 11 years as the freshman head coach and assistant coach at St. Peter’s Prep.

But Guasconi is a North Bergen relic. He’s still the principal at Kennedy School in North Bergen. He’s spent the last 30 years in the North Bergen school district.

Guasconi also spent several years as a dutiful assistant coach to the legendary Ascolese, who passed away two years ago.

So despite stops at Weehawken, Kean and St. Peter’s Prep, Guasconi is North Bergen through and through and now he gets a chance to be the head coach, music and all.

“We were able to get a coach who knows all about technology,” Guasconi said. “He suggested that we hear some music during practice. So today it’s Motown. We’ve had AC/DC one day. We’ve also had some rap. We’re trying to give this as much of a college atmosphere as possible, so we’re practicing to music.”

“It’s nice to be back,” Guasconi said. “It’s been 21 years since I coached here. But I needed to bring some people back to help me.”

So assistant coaches Wayne Giordano and Eddie Somick were retained on Guasconi’s staff. Veterans like Fran Pastore and John Cellini, guys who worked with Guasconi under Ascolese, also came aboard.

“These guys are among the very best coaches in New Jersey,” Guasconi said.

Guasconi said that he also wants to get the historic North Bergen alumni involved, the players who won nine state championships over the years.

And there will be an Alumni Day Sept. 24 when the Bruins face Bloomfield.

“I want to explain to them how important it is to play football for North Bergen,” Guasconi said. “The tradition is here. You have to cherish the moments you have. I was reminded of that by Richie [Hansen, the head coach at St. Peter’s Prep].”

The Bruins have a handful of players back from last year’s 4-6 squad, a team that failed to qualify for the NJSIAA state playoffs, only the fourth time in the program’s history.

Leading the way is senior quarterback Kyle DeOrio (5-11, 190), who was the starter last year for former coach Czar Wiley.

Guasconi has always had a close relationship with his quarterbacks and this is no exception. The two are already clicking.

“Kyle did well in the weight room in the offseason,” Guasconi said. “He also went to a bunch of camps to get better and did well there. He’s going to get some looks from colleges. I like the way he plays.”

“I expect a lot from him,” Guasconi said. “He wants to be good, so he works very hard. He’s a good slasher. He’s elusive.”

Junior Erik Delgado (5-8, 170) is another running back. Delgado is a former quarterback playing running back for the first time.

Senior Roland Urgiles (5-8, 180) will also get his chance to shine in the Bruin backfield.

The fullback is sophomore Michael Santini (5-10, 205), who comes from great football stock. Why is that? Because he’s the grandson of the immortal Vince Ascolese.

Sophomore Chris Angulo (5-9, 195) is another fullback. It should be interesting to see who emerges as the Bruins’ go-to guy.

The Bruins have a lot of depth at wide receiver, with six kids all battling for playing time.

Junior Justice Rivera (5-10, 220) is the starter at center. He also saw a ton of playing time last year. Chances are that when he blocks, he lays out a lot of Justice.

“I’m going to keep rotating them until we get the best five out there,” Guasconi said.

Defensively, senior Lexie Burke (6-1, 195) is at defensive end, along with Rosario and Chia. Ponce de Leon (without the fountain of youth) is at defensive tackle with Ross and Matt Rodriguez.

The Bruins have a ton of depth at linebacker, led by Santini.

“He has a good nose for the football,” Guasconi said. “After all, he’s an Ascolese.”

The Curra twins are bookend cornerbacks, with senior Tomas Marte (6-1, 190) entering the picture there. Marte never played organized football before this year.

The Bruins open the Guasconi era against Bayonne Sept. 9 and then face Hackensack the following week. Guasconi likes the Bruins’ placing in the new Super Football Conference.

“We get to see new schools and I’m excited about it,” Guasconi said. “We’re facing all Group V schools. It should be interesting.”

As should the choices of music Guasconi has at future practices. – Jim Hague