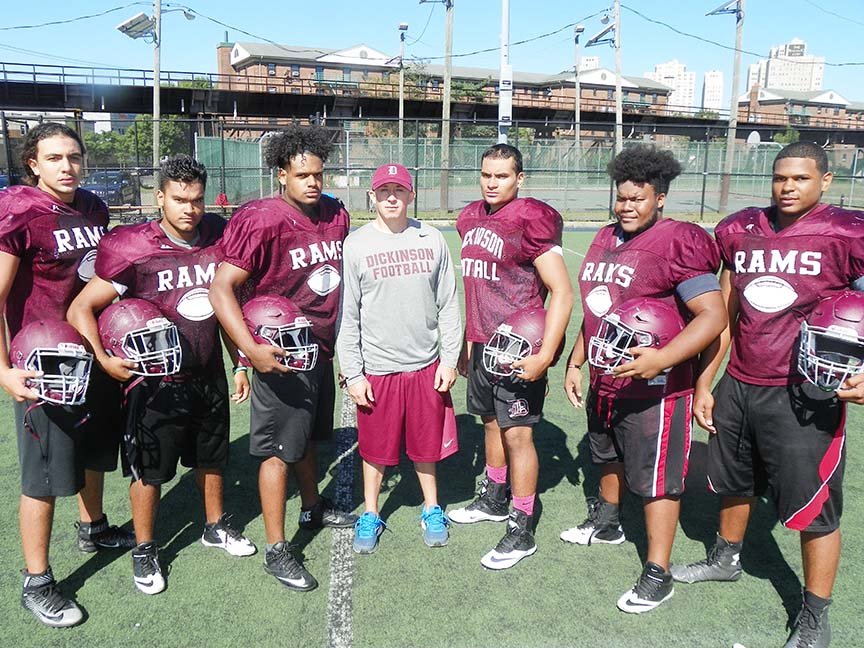 Sean Fallon knows that this is a special year for the Dickinson High School football.

It’s the fourth year since the program was brought back from extinction under his watch, so all of the current players are Fallon’s players and not holdovers from another regime.

“When I got here, the program was in pretty rough shape,” said Fallon, who helped to resurrect the St. Anthony football program a few years back before moving on. “We’ve tried to create a structure outside of football and we’re also trying to win some games. The kids have really bought in. I have 10 seniors who have been playing for me since they were freshmen, so they know what to expect from me.”

Fallon doesn’t have the largest of teams in terms of numbers, especially with a Group V enrollment school.

“We only have 30 kids,” Fallon said. “But I can trust them. I know what to expect from them. They believe in themselves. With that in mind, they’re making progress. They had two wins two years ago and three wins last year.”

“He knows the position and knows what to do,” Fallon said. “He has a good arm and can throw the ball well. We haven’t been able to do that as a team the last few years.”

Returning at running back is senior Santos Feliz Perez (6-1, 230). A former Hudson Reporter Athlete of the Week honoree two years ago as a sophomore, Santos Perez missed all of last season after he suffered a fractured spine in a preseason scrimmage.

“Losing him really hurt us last year,” Fallon said. “He’s back and looks good. We’ve been taking it easy with him because we don’t want to lose him again.”

Senior Daniel Rivera (5-10, 170), the backup quarterback, is one of the starters at wingback, along with junior Deshawn Oliver (5-8, 175). Oliver has the kind of speed that can get to the perimeter, so he plays a big role with this team.

The guards are seniors Edward Bello (6-0, 230) and the always-popular Zshquan Purcell (5-11, 225), who is good natured about his unique first name. No need to check spelling. Purcell is a four-year player who has heard it all about his name.

“We have five kids on the roster who have played for us for all four years,” Fallon said. “There’s a certain level of physical maturity.”

Defensively, the Rams have junior Faybien Libran (6-0, 200) at defensive end, along with Bello. Purcell and Saldana are the defensive tackles, with Feliz Perez and Faulkner at outside linebacker and Roman in the middle.

In the secondary, Etienne and Tucker are the cornerbacks, with Rivera and Oliver at safety.

The Rams open their season Sept. 9 against Paterson Kennedy. They will not have the same schedule as they had last year, being pushed in with other like-sized Group V schools in the new Super Football Conference.

But that pairing isn’t fair to a program in only its third year of varsity play. The Rams simply deserved a better fate and should have received consideration as a fledgling program instead of an established one…

Hudson County was in the sports spectrum, but for all the wrong reasons last week.

First, it was reported that Giants placekicker Josh Brown had one of his domestic violence incidents in his apartment in Hoboken with his wife, then it was rumored that Brown’s Hoboken landlord tried to blackmail Brown, saying he was going to call the Giants and tell them about the incident unless the landlord received money from Brown. Right, only in Hudson County.

Then, it was learned that former New York Mets Cy Young Award winner Dwight Gooden has been living in Jersey City. This came about after there were concerns for Gooden’s health and rumors of his return to cocaine use by former teammate Darryl Strawberry after Gooden missed two public appearance dates last week.

It forced paparazzi and reporters to stake out Gooden’s apartment to see if he was in decent health. Gooden said that he wasn’t using cocaine anymore, despite his gaunt appearance, and criticized Strawberry for getting involved…

On a positive note, Jersey City native Jonathan Casillas is looking more and more like a starting outside linebacker for the New York Giants this season, after enjoying a brilliant preseason.

Casillas said last week that he is 100 percent healthy and that has definitely helped his play.

“Last year I had a neck issue that I was dealing with during the preseason,” Casillas said after practice one day last week. “It kind of limited the reps I got. You can’t replicate an actual stance and actual contact if you’re not doing it. I think I was a little bit behind as we started the season and I had to play catch up during the season. I’m playing now just like everyone else, so I’m not missing any other steps. I’m healthy and I’m able to run around. I’m fully integrated with all the guys. Not only am I better but I feel like everyone else is getting better. Everybody that’s there is. Some guys are on the sideline and that’s just how it is. You can’t play when you’re hurt.”

Time for Character No. 12 on the list of the Top 25 characters of the last 25 years and we’re going with the late Jane Greene of Jersey City.

For more than 20 years, Greene was the hands-on person for the Hudson County Division of Parks. If you wanted a field in one of the Hudson County Parks, Jane was the person to contact. She was also the driving force behind the Hudson County Sports Hall of Fame organization, doing anything and everything from seating arrangements and flowers for the tables at the induction dinner to coordinating meeting times and calming down heated conversations, even if she was the lone woman present.

And with her beloved husband Paul, a.k.a. Shecky, a Jersey City motorcycle cop, the two would be involved with bowling leagues and the Hudson County Special Olympics. If you saw the two together, they were like a comedy act, almost as funny as Burns and Allen. You would think that the two hated each other, but they were madly in love – and their humorous moments only went to prove that.

But Jane Greene, for all she did and the way she did it, deserves her place among the Top 25 Characters here. She may be gone for a few years now, but she will never be forgotten. And she’s the first female listed among the Top 25…–Jim Hague