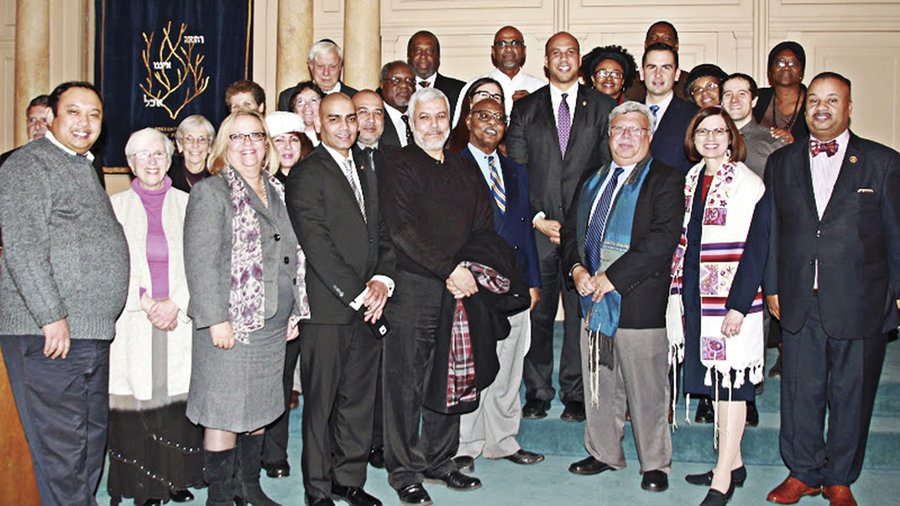 Less than a week before his assassination in April 1968, Dr. Martin Luther King, Jr. spoke at the Metropolitan AME Church in Jersey City about his vision of an America where all people were treated equal. He had come to talk about his life-long mission of achieving equal rights for all people.
Morris Pesin, Samuel Berman, Milton Gottlieb and other member of Temple Beth El led a march six blocks from the temple on Kennedy Boulevard to greet King. Pesin, best known for his role as the father of Liberty State Park, was also a staunch advocate for civil liberties. He organized the Hudson County Committee for Fair Employment Practices in 1940, was closely associated with the local branch of the NAACP, and helped break the color barrier at Palisades Amusement Park in 1940.
In a tribute at the time of Pesin’s death in 1992, Rabbi Kenneth Brickman at Temple Beth El, Pesin described him thus: “Convinced that members of the diverse groups in the city need to work together to make the city a better place, Pesin for decades has been seeking to break down barriers that keep them from doing go.

_____________
“Everyone is welcome to the event.” – Irwin Rosen.
____________
“We at Temple Beth-E1 are deeply indebted to Morris for his efforts to build bridges of understanding between our Jewish community and other ethnic and religious groups in our city,” Brickman said at the time. “Under the leadership of Morris and his dear friend, Milton Gottlieb, of blessed memory, our Temple has for many years sponsored an annual service of tribute to the late Dr. Martin Luther King Jr., which has brought the general community into this sanctuary to remember Dr. King’s life and to recommit ourselves to working toward the goals for which he labored.”
The tradition that Pesin started in 1985 will resume this year with the Annual Martin Luther King Service on Friday, Jan. 22 at 7:30 p.m.

Although the themes vary from year to year, nearly all center on the common bond between African-Americans and Jews. This year, as in prior years, Morris’ children, Sam Pesin and his sister Judy, also participate in the service.
“Everyone is welcome to the event,” said past Temple-Beth El President Irwin Rosen.
The event will feature Jersey City civic and religious leaders at Shabbat service a Beth-El tradition.
The service will honor the life, work and vision of Dr. King with keynote address by Rep. Donald Payne, Jr.
Five years ago, Payne’s father, the late Rep. Donald Payne (D-10th), whose district encompassed portions of Hudson, Union, and Essex counties, also spoke at this event. The elder Payne, personally met King several times during the 1960s, including a 1965 fundraiser where noted Newark rabbi and civil rights advocate Joachim Prinz shared the same stage with King.
Past speakers at the event included Jersey City Superintendent of Schools Marcia Lyles, U.S. Sen. Cory Booker, columnist Earl Morgan, Roy Innis (founder of CORE) and others.
“We’ve been doing this for 31 year in a row,” Rosen said. “We have had some well-known speakers and some people who are not so well-known to the general public. Last year we had Cory Booker and he was incredible.”
Oneg Shabbat refreshments will be sponsored by Sam Pesin, Lou Borriello, and Judy Borriello Pesin in honor of Dr. King, and in loving memory of their parents, Ethel and Morris Pesin. Donations of canned food and new adult warm hats, gloves, scarves and socks will be welcome to assist the needy and homeless.
Oneg Shabbat, or refreshment period, is an important moment that allows those that attend to talk to each other.
“We live in such a world of divisiveness,” Rosen said. “This is a program that allows the congregation and the community to come together. This is all about bringing people together.”
Temple Beth-El is located at 2419 Kennedy Boulevard in Jersey City.