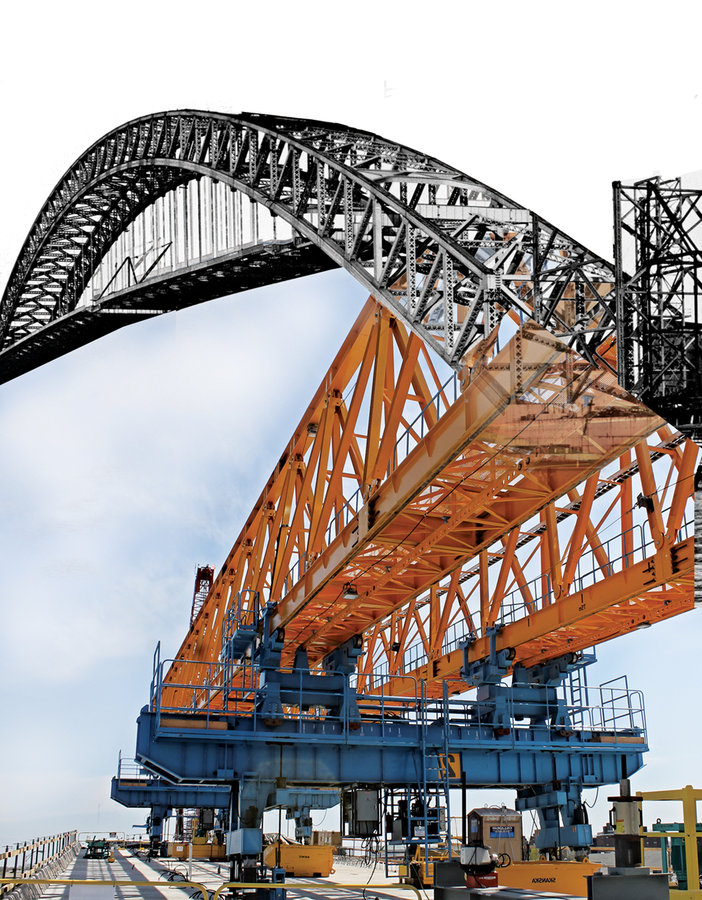 With the raise-the-roadway project, slated for completion in 2018, the Bayonne Bridge is going through a transformation never envisioned when it debuted in 1931. As it undergoes this massive change, we thought it would be a good time to call on one of Bayonne’s most revered citizens to share his memories of the bridge back in the day.
My dad’s first memories of the Bayonne Bridge begin at the age of 4, in 1931. He remembers sitting on his grandfather’s front porch, listening to him tell of how that very house was picked up from its original site on Margaret Street and moved a few blocks to where it stands today, on John F. Kennedy Blvd., between Juliette Street and West 4th Street. The reason for this move was to make way for the entrance to the Bayonne Bridge.
His own father’s reminiscences of the grand opening of the Bayonne Bridge are as grand as the opening itself. “My father was a motorcycle cop on the Bayonne Police Department at the time,” Dad relates. “He had the privilege to be one of the motorcycle escorts of the dignitaries as they traveled from Bayonne to the Staten Island side. The mayor of Bayonne was the first passenger car over, driving his 1928 Rolls Royce. After a number of introductions and speeches, the day ended with the entire entourage having a celebratory dinner at the Bayonne Elks Lodge, where all the participants of the day received a commemorative medal for their efforts. I still have that medal.”
At the age of 9 while attending PS1, now Henry Harris School, Dad recalled a visit from a special guest. It was 1936, and President Franklin D. Roosevelt was running for re-election. On his way to campaign appearances in New York City, President Roosevelt passed through Bayonne in his motorcade and crossed the Bayonne Bridge. The entire school, along with bands and other spectators, lined the bridge entrance as the President, in his car with the top down, waved and flashed that FDR smile upon the people of Bayonne.

Dad recalls that he and his Bergen Point friends spent a lot of time on Staten Island. For a nickel, you could walk across the bridge; upon arrival in Staten Island you were greeted by movie houses, stores, and the Staten Island Pool, were you could cool off in the summer months. If you didn’t have five cents, you’d hitch a ride with one of the motorists going over to the island. Despite its many attractions, Staten Island was still rural, with vast areas of farmland and open fields for picnics and playing ball. If you were energetic enough and walked a bit more, you’d come upon Clove Lake, and the Clove Lake Zoo. The Bayonne Bridge opened this entire new world to the denizens of downtown Bayonne and beyond.
While to the right of the bridge, industry began to spring up, on the left side, from 1st Street to the Kill van Kull, were beautiful beaches. The best section of beach was from the bridge east to what is now Collins Park. There were “life stations” along the Kill, but the favorite was the one beneath the bridge, always manned by a lifeguard, where most kids in downtown Bayonne learned to swim. From time to time, the bravest of these swimmers would save the nickel and swim across the Kill to Staten Island. This was done with great caution and a knowledge of the tide charts. To go to the island, kids set out with the tide, from the bridge area. They’d arrive on the island across from what today is Brady Dock. To get back, they’d swim with the tide from the Brady Dock area and land near the bridge. Dad remembers a small diner called Cal’s in the vicinity of what is today 1st street and JFK Blvd.; the soda was always cold.

In what is now Collins Park was Townsers Terminal, where tugs brought in old barges, no longer in service, for dismantling and scrap. As time went on, and the nation became embroiled in WWII, Elco Boat Works would test all the newly built PT boats before shipping out for service in the Pacific theater. Dad remembers hearing those big engines all over downtown, and the speed of them on their shakedown cruises was incredible. Just about that time, a guy who was a little older than Dad, and a bit of a local legend, threatened to do something daring. This man had his pilot’s license and promised to fly his plane under the Bayonne Bridge. He did not disappoint; on the date and time designated, he flew directly under the bridge. He went on to serve in the Army Air Corps during WWII. “He lived on 3rd Street, and just as he promised, he pulled off that stunt,” Dad says. “There was a lot of stuff like that in those days. Downtown Bayonne was always abuzz, always something to do, and the bridge area, 1st street and the beach area, was always alive.”
My father recalls that in 1956, the Port Authority donated the land under the bridge at Julliette Street for a park, and in 1966, he recalled the collision of two passing ships, the Alva Cape and the tanker ship, Texaco Massachusetts. The fear at the time was that the bridge would be damaged by the heat and flames of the blaze. Another memory of great ships was the ocean liner Normandie, which had to be cut down to fit under the bridge. In 1942, it caught fire while being converted into a troop ship and could be seen being hauled to Kearny for scrap.

In 1981, while working for Representative Frank Guarini, Dad took part in the ceremony celebrating the 50th Anniversary of the Bayonne Bridge. As it did some 50 years earlier, the day’s events ended with a celebratory dinner at the Bayonne Elks Club. “It was exciting,” Dad says. “I remember exchanging stories and memories with everyone there. Each of us had our own fond memories, and mine were of my father and grandfather.” (Dad was named for his grandfather.)
I asked my dad what he thought about the bridge and what it meant to him. The great arch adorns so many things here in town. Was it the symbol of Bayonne? Was it the engineering feat? It was for many years the longest steel arch bridge in the world. His answer speaks to a different time in Bayonne and in the world. “Life was simple back then,” Dad says. “We looked at the bridge like it was ours, it belonged to Bergen Point, and it was filled with lore—the daredevil pilots, and who could swim to Staten Island the fastest. We lived around the bridge, and nobody seemed bothered by it. We lived through burning barges, colliding ships, blasting and trenching the Kill. We watched huge cargo ships being guided deftly by tugs, and felt the excitement of seeing foreign flags attached to those ships as they entered and left our little slice of the globe. Nobody complained. Everyone accepted it and enjoyed it. I can see the bridge to this day from my front window. In 2001, I watched as the ever-present white lights became red, white, and blue. Many great memories I have.” It was Dad’s final thought that touched me the most. “If it weren’t for the Bayonne Bridge, I would have never met your mother over in Bayway in Elizabeth,” he says. “I never thought about that before, but that bridge was an integral part of my story. My story, one of many that evoke the iconic structure that spans the Kill van Kull—the Bayonne Bridge.”—BLP