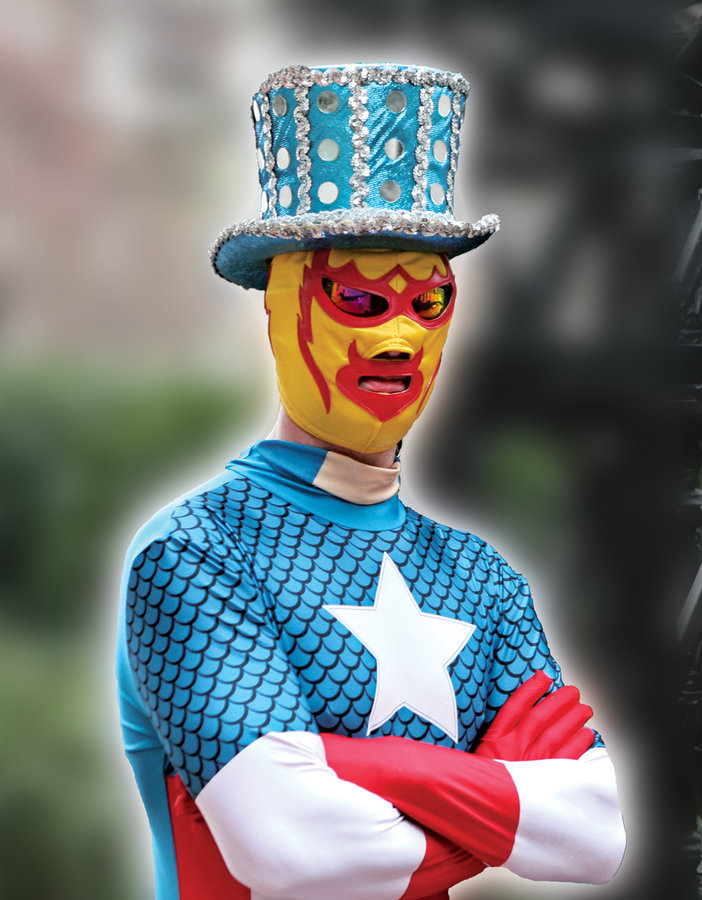 Superman may be a more apt model for Captain Bayonne than Captain America. Captain Bayonne’s Jimmy Olson job is to work in admissions operations for Columbia University. But when he’s not at his day job, he’s seeking truth, justice, and the American Way in his hometown of Bayonne.
A Jersey City native, Brian Rocheny has been living in Bayonne for 23 years. Rocheny, 43, has been working at various jobs since age 11. But there was a time back in his college days when he was studying to be an actor. That didn’t work out, but it may be the defining moment for his avocation as Captain Bayonne. That, along with some gigs as a standup comic in Manhattan.
“I wanted to be an actor,” he says, “and being Captain Bayonne is like playing a role. It’s just natural. I have a creative mind and get bored very quickly. This character is something different, and I found it appealing.”
But perhaps one of the most surprising things on his bucket list was to compete in the New York City Marathon. The first chance he had to do it was in the fall of 2001.
“It was extremely emotional,” he says. “They weren’t sure that it would come off.” He continued to run in marathons, and it was while running on a hometown street that Captain Bayonne was born.
“It was five years ago,” he says, “and I was running at night and almost got killed by a car barreling down Avenue A. The car managed to stop inches away from me; otherwise I would have gone through the windshield. It was then that I started to think of ways that I could stand out so that people could see me.”

He’s a constant presence at Bayonne’s many parades, festivals, and other events. And also on Facebook. That’s not a site where he’d planned on appearing, but two people who’d seen him around town started a Facebook page.
In fact, they were the ones who dubbed him Captain Bayonne. Before that, he’d called himself Fat Flash Super Hero.
“Now I’m on the Facebook page to respond to people who ask for any kind of help,” he says. He cites as examples fire victims, whom he has helped by raising money through the sale of Captain Bayonne T-shirts and mugs. Bayonne citizens gave him clothing, cribs, furniture, and electronics for the victims. He also helped the family of a Bayonne teacher who died in California to bring the body back to Bayonne. “I contacted senators in California, who contacted the coroner,” he says. When he’s at an event he’ll take “a little old lady shopping cart” and fill it with kids’ goodie bags stuffed with bubbles, pencils, toys, and clown noses. He gets his outfits on eBay. After the tragic events at the Boston Marathon in 2014, he is not allowed to wear his mask in marathons.
“My goal is to help people and make people smile and laugh a little bit,” he says.

Brian Rocheny may have grown up in Jersey City, but Bayonne is definitely a better town for a superhero. “I’ve run through Jersey City a couple of times,” he says, “and it hasn’t gone as well. People have threatened me. One guy early in the morning went off on a rant, saying he would kill me and other stuff. I don’t get that kind of reaction in Bayonne. They take a picture, say hello. It’s a lot friendlier.”
He also gets a good response from his Columbia coworkers. “A lot of them are very supportive and have bought T-shirts,” he says. “They get it. They have a sense of humor.”
His wife is supportive, too, but he acknowledges that she has a hard time calling him “Captain” in public.
“I always liked Bayonne growing up,” he says. “My mom took me to the park in Bayonne, and I was very fond of it. It’s a nice town, a good community with good people. They come together anytime somebody is in need.”
Rocheny says he’s always in Bayonne supporting local businesses.
His future plans call for creating a video declaring war on litter in Bayonne. “I’m out every week, and do what I can,” he says. “Everyone should pitch in an hour a week.”
Aye, aye, Captain.—Kate Rounds