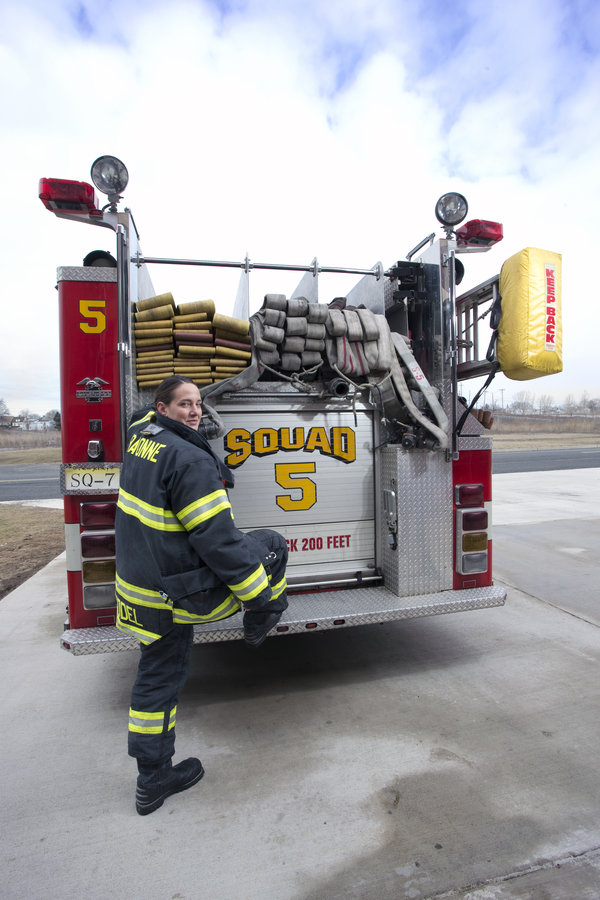 Spend just a few moments with Cailin Brodel, and you know why she made the grade. Women who are the first do to anything often are uber-qualified—and also very humble. That’s how she comes across: as a professional, gracious, good-humored, straight-forward, take-charge kind of person who manages to be multi-talented and unpretentious at the same time. She had three formidable careers before joining the Bayonne Fire Department. She worked in the finance industry and was an EMT and a registered nurse.
As a “probie,” or probationary firefighter, Brodel will learn her job by watching and working with the experienced and skilled men who surround her.
When we visited the new firehouse for the photo shoot, firefighters were in the modern kitchen, watching TV, talking about hunting, the cold winter just past—and fires. Bob made fried-egg sandwiches for his fellow firefighters.
Soon, Brodel sailed in with two large boxes of cookies from Judicke’s. When I commented that the cookies were a nice gesture, one of the men joked, “They’re required.”

Brodel grew up on North Street downtown and attended a mosaic of Catholic institutions: St. Vincent DePaul RC Elementary School, Holy Family Academy, and Boston College. “I wasn’t specifically looking to go to a Jesuit College,” she says, “but I wouldn’t change anything about going to Catholic schools. I made great friends and had great role models.”
She points to Holy Family as an institution that honors “women and men of vision,” and Boston College, whose motto is “Men and women for others.”
“I didn’t have a clear-cut vision of a job or career,” Brodel says. “I went to college with the idea that I’d figure it out.” Like a lot of students, she chose what “felt like the most marketable major.” In her case, economics.
After college she got a job as a brokerage operations representative for an investment company in New York City. She lasted less than a year and then, not surprisingly, “I did not like working in an office 9 to 5,” she says. “I didn’t see how my role was impacting anyone positively. I started spending a lot of time trying to decide what career would allow me to feel emotionally, spiritually, and professionally fulfilled.”
Right after she left the investment firm, she submitted an application for the Bayonne Fire Department civil service exam. Five months later she took the written portion of the exam, which involved word problems and some critical thinking. She also had to watch a short video with vignettes of various scenarios. The applicant is asked to choose among different options for handling the situation. It seems, she says, as if the exercise was meant to test your ability to be a team player and remain level-headed.

In May of the following year, she took the physical portion of the civil service exam, for which she had to wear a vest weighing about 45 pounds and go through “a bunch of obstacles.” She had to drag a hose and a dummy, lift a box of equipment and a saw, and carry a 50-pound bag up and down a flight of stairs 12 times. “Lifting the weighted bag up and down stairs was the most difficult in terms of energy expended,” she says. “The test is extremely challenging. Whether you are in the greatest or worst shape, no one would find it easy.”
Brodel, who is 27 and five-foot-nine, does not disclose her weight. She participated in sports throughout her educational life, including swimming at Holy Family and playing on its volleyball team. She currently goes to the gym. “I work out, but not like crazy. I want to maintain my strength and improve upon it.”
Meanwhile, a medical career seemed to be calling her, and by September 2011, she was enrolled in a 14-month accelerated nursing program at NYU. “When I decided to become a nurse,” she says, “I wanted to gain some experience in medical care, so I became an EMT and worked part time as an EMT at McCabe through nursing school.” [See our story on McCabe on Page TK] Soon after graduation she landed a job working at the NYU Langone Medical Center in the department of inpatient adult medicine. “I liked nursing. I had a lot of great friends and liked my coworkers,” she says. “Nurses definitely deserve all the credit in the world, but the difficulty of the job is underestimated. It’s stressful and challenging because there’s a lot of responsibility, but it’s rewarding.”
Her department dealt with a broad range of illnesses and conditions. “I could have had a successful, happy career as a nurse,” she says.

That is, until the Bayonne Fire Department called. She quit her nursing job in August 2014 and by Aug. 18, she was sworn in to the Bayonne Fire Department. She graduated in a ceremony on Oct. 30, 2014.
When Brodel describes her first months on the job she sounds like the opposite of NBC anchor Brian Williams, who exaggerated his exploits during the Iraq War. Brodel minimizes hers, using phrases like “providing support” and acknowledging that her first fire was already out by the time her company got there. Civilians usually look at the job in terms of the danger and the fear factor. “The only thing I’m afraid of is not doing my job correctly,” she says. “I’m not thinking about what is physically harmful or scary. I want to operate as safely as possible and do the right thing to mitigate the harm the fire is doing.”
She says, “This is your job, you signed up to do it for the rest of your career, you get paid to do it, and the sooner you get accustomed to the danger, the better off you’ll be.”
You’d think that her training as a registered nurse would come in handy on the job, but she says she’s not allowed to practice nursing interventions on people while working as a firefighter.

“When I first told my parents about taking the test, they supported it, because I don’t think they anticipated that it would ever come to fruition,” Brodel says. “Once I realized it was within reach, they got nervous,” reminding her that she already had a great job as a nurse. Brodel told them, “I love you both, and I would appreciate your support.” From that point on, she says, they were “super supportive.” She emphasizes that they always believe in her and are proud. “I think they kind of hold back letting me know how nervous they are,” she says. “They don’t want me to worry for them.”
Her mother is an administrative assistant for a law firm in New York City. Her father is a ship superintendent for Ports America’s Bayonne Auto Terminal at the Military Ocean Terminal. The company imports and exports cars. Brodel’s firehouse is the new one on Chosin Few Avenue at the Peninsula at Bayonne Harbor, a stone’s throw from her father’s workplace. She tells the story of passing him when her company was on the truck on their way to a fire on the pier “in his neck of the woods.” A crew was “putting down asphalt on the pier,” she relates, “and the tar-heating truck caught fire and was completely engulfed in flames.”
Brodel lives in Bayonne with her boyfriend, who is an officer with the Hudson County Sheriff’s Office. “He gets the whole civil-service frame of mind,” she says. “He has a dangerous job, too. We worry about each other, but we try to stay positive and support each other.”

If You Can’t Stand the Heat

OK, so you have to be brave to enter a burning building, but what about braving the kitchen of a firehouse? Firefighters are notoriously good cooks, and everyone has to do apron duty. “I would not call myself an expert chef,” Brodel acknowledges. “I cook at home, but cooking for 10 hungry guys? That’s another ballgame, and I was stressed out.” Nevertheless, she stepped up to the plate, so to speak, and pulled off an Ash Wednesday shrimp-and-pasta dinner that her fellow firefighters gave a “great” review.
And that was no mean feat. Members of the Bayonne Fire Department took top honors last year and this year in the statewide Ultimate Fire Department Cook-Off.
Brodel says she has had no problems whatsoever being the first woman in the department. “I’ve never had an issue,” she says. She shares a bunk room with the guys that has about 11 twin-size beds. There’s a curtained partition if she needs it. “They very nicely extended that courtesy,” she says, “but I haven’t used it yet.”

Many of us have had the sensation of remembering something deep in our childhoods and realizing in hindsight that experiences from long ago can influence the here and now. Brodel’s mother’s first cousins were both Bayonne firefighters. “When I was a kid, I knew they were firemen,” Brodel recalls. “When we’d run into them at the grocery store, I’d jump in the truck and sit in the driver’s seat, and they’d let me pull the horn. This was my first interaction with firefighters.”
Brodel was about 6 at the time and maintains she was too young to focus on being a firefighter herself. “I remember thinking that this is really cool,” she says, “and not something that was out of my reach but something I could do if I wanted to.”
It’s hard to imagine that “pulling that horn” hasn’t been marinating in her subconscious for the past two decades.
But it was Sept. 11, 2001 that may have clinched it. Brodel was a freshman at Holy Family at the time. “I was affected by it,” she says. “It became important to me to honor and emulate the firemen who lost their lives. The respect I had for them led me to want this job.”
And excel at it. “I want to make the best of the career I chose,” she says. “I want to come at it full force, learn as much as possible, do really well, study for promotional exams, and one day become an officer. Of all the places I’ve been in my professional life, this is the first time I’ve felt at peace.”—BLP