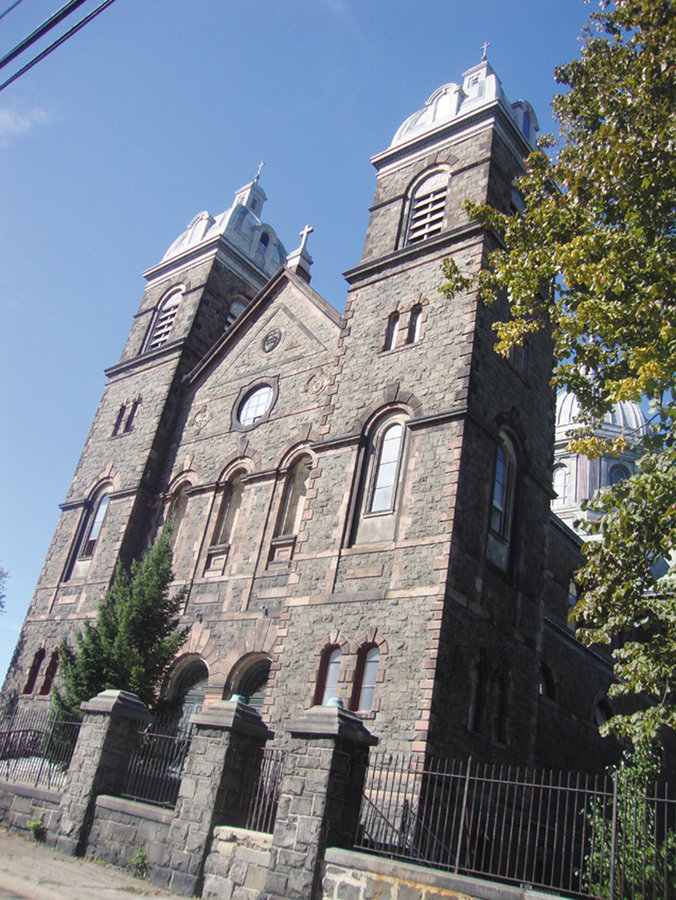 People strolling or driving on Bergenline Avenue in Union City may have noticed the former St. Michael’s Monastery and Church towering majestically above the surrounding rooftops. These days, it serves as a Korean church. What most are unfamiliar with is the building’s complex cultural history, its divided present, and its uncertain future.
This was precisely the reason for the meeting held there last Saturday by the Hudson County Genealogical Society (HCGHS).
The current reverend of the Korean church, Sam Sung, was joined by two speakers: Louise Meiére-Dunn, daughter of internationally renowned artist Hildreth Meiére, whose artwork adorns the church walls; and Passionist priest and genealogist Father Rob Carbonneau.
All three have joined forces with the HCGHS to create the “Friends of St. Michael’s Monastery Church” group whose goal is to one day restore the landmark to its former beauty and reunite the now-divided local church community.

St. Michael’s was built in 1864 by a group of Passionists, a Roman Catholic religious order founded by St. Paul of the Cross. The Passionists in Union City (then West Hoboken) were led by Bishop James R. Bayley of Newark.
The congregation thrived until a fire ravaged the church in 1934, completely burning down its domed section.

The church was repaired and the dome was rebuilt the following year. The monastery continued to serve the predominantly Irish, German, Italian, and Hispanic community as a provincial house, a seminary, and a residence for church clergy until it was shut down entirely in 1981 as a result of financial hardship.
In 1984 the church was purchased at a minimal price from the Passionists by the Korean community, and in 2008 Sung was installed as the church’s pastor, where he continues to serve to this day.

Reverend Sung was born in South Korea in 1966 and moved to California when he was 13. He eventually ended up in Union City, where he was ordained as pastor of the Hudson Church.
Sung was immediately taken by the landmark: “As soon as I came here, I could not believe what I was seeing: the treasure and the beauty of this monastery. Since 1984 this church has been very private — off limits to the public.”
This is something he plans to change.
In the 1970s and ’80s, the local Korean community became more and more established and was able to purchase the monastery “because the cost of caring was too high [for the Passionists]. [They] wanted to give it to somebody who would maintain it.”
It was already in an advanced state of decay upon purchase. “It breaks my heart that [Hildreth Meiére’s] paintings are no longer able to be seen because of the rain damage,” Sung stated.
But the physical restoration is not the only obstacle the church must overcome. Ever since its sale, unresolved divides linger in the spiritual community as well.
“This church is not a Korean church,” Sung explained. “It is a church that glorifies God.” He said he feels that the only way St. Michael’s can move forward is if the community unites behind the cause as a whole.
“This church deserves a second chance,” he said, “where every nation, every person in Union City can come in.”

Bringing back the passion

“All data is human,” Father Rob Carbonneau informed his audience at Saturday’s gathering. His is a seemingly paradoxical double career. As both a priest and a genealogist, he is champion of both faith and of facts, which makes him perfect for his job as a Passionist archivist.
“The function, really, of our archives is to humanize the relationship that people have with [historical] life,” Carbonneau said of the vast amounts of data that are currently housed in St. Michael’s. There are boxes and boxes of baptismal records, school rosters, and literature and census information that hold over a century of local history; and they need a proper sorting through.
This is part of HCGHS’s mission. Carbonneau explained that the archives pose a “baffling” challenge, and he hopes to join with Sung and the community to give voice to the monastery, the church, the town, the city, the Passionate and Korean point of view, and the ever-growing international perspective.
And then there’s the building itself.

Hildreth Meiére, restoration, and the future of St. Michael’s

Yet another historically irreplaceable part of St. Michael’s in need of immediate attention is the artwork created by the world-famous female artist, Hildreth Meiére. Her career spanned over four decades during “a[n artistic] time dominated by men,” according to her daughter.
Louise Meiére-Dunn told members of the meeting that her mother was deemed “a master of murals” by the American Institute of Architects in 1928. In 1932 she became the only woman artist to receive commissions for Rockefeller Center. She is most famous for her three plaques that hang above Radio City Music Hall that represent the spirit of dance, drama, and song.
In 1934 Meiére was commissioned to execute three murals of the patron saints of the shrine for the chapel at St. Michael’s, all of which were destroyed in the fire. However, after the church was rebuilt, she was again commissioned and completed 14 more murals that currently hang in the monastery.
These murals and the rest of the interior of St. Michael’s are in an unfortunate state of disrepair. The archives run deep and untouched. The congregation is still segregated.
Fortunately, “The Friends of St. Michael’s” has established an initial four-year plan to address these issues. A meeting will be held this coming week to finalize some of the logistics: members will create a bank account for necessary donations, work on a website for those interested in more information, and figure out new ways to generate public interest.
“Be on the lookout. Good things are happening,” Hildreth’s granddaughter stated.
For more information, please visit the HCGHS website at www.hudsoncountynjgenealogy.org.
Gennarose Pope may be reached at editorial@hudsonreporter.com.