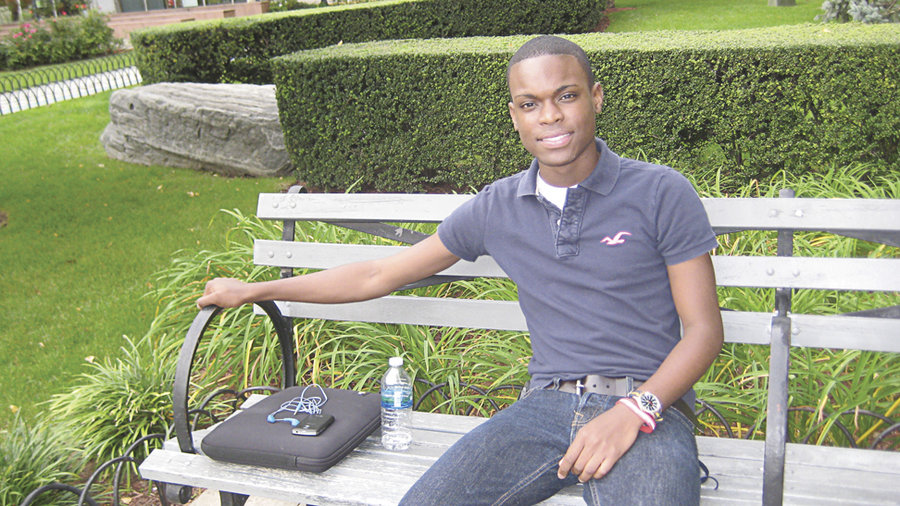 Like many teens his age, Demetrius Terry is a work in progress full of contradictions. But unlike most young people his age, when the Seton Hall University freshman isn’t in class or studying or working his job at Newport Centre Mall, he’s campaigning for political office.
At 18, Terry is the chairman of Hudson County Teenage Republicans and has declared his candidacy for the Jersey City Ward A City Council seat in 2013.
As an African American Republican seeking election in heavily black district, in a city and county that are both overwhelmingly Democratic, Terry has his work cut out for him. Still, Terry – who has described himself as a “conservative on the move in the inner city” – believes he can sell his brand of fiscal frugalness and compassionate Republicanism, even here.
“Building the Republican Party in Hudson County is a big challenge,” Terry conceded, noting that his Hudson County Teenage Republicans group currently has five members. “I’m still learning the process, seeing how Republicans reach the voters. They come to Greenville, Bergen-Lafayette, and the things that they say– There are certain things you just can’t say. But I’m straight up with people and I’m going to keep it real.”

_____________
Terry is working to strengthen the GOP northern New Jersey.
____________
A member of the Hudson County Republican Club, he said he is working with others to strengthen the GOP in northern New Jersey.
Terry, who plans to major in political science and attend law school after Seton Hall, said he spends several hours each weekend talking to voters in the Greenville section. And while voters are surprised by, and even a little curious about, his GOP leanings, no one has been rude or unwilling to hear his take on the Republican Party and what it can do to revive low-income black communities.

Ironically, Terry, who said he does not come from a politically active family, said his first introduction to electoral politics came during the 2008 presidential election when he worked for the Barack Obama campaign and joined the Hudson County Democratic Organization.
He said his party allegiance shifted when he was about 16 and moved from Jersey City’s Greenville community to Linden, N.J. for a year.
“That’s when the governor’s race was going on between [Christopher Christie and Jon Corzine]. I took a look at the party platforms, what Christie was running on, what Corzine was running on, and Corzine’s spending just didn’t make sense to me,” he said. “You can’t spend money you don’t have. I decided to do more research into the two parties and I saw the principles of the Republican Party and the principles of the Democratic Party. I saw that my views line up more with the Republicans. That’s why I became a Republican.”
After that, he said he became involved in the Union County Republican Party and started working to get Christie elected as governor. He also worked on a few local Republican campaigns during his year in Union County.
Still, Terry’s admiration for the GOP hasn’t blinded him to the need for bipartisanship.
“Just because you’re a Democrat and I’m a Republican doesn’t mean we can’t work things out,” he noted. “I believe in bipartisanship. There are certain things that I support the Democrats on. Cutting welfare, for example, I’m opposed to that. And I support Obama’s jobs bill.”
Living in Greenville, Terry said he sees high unemployment throughout his community.
He said some of the unemployed in his neighborhood aren’t doing enough to get hired, but he also believes government needs to play a proactive role in preparing people for work and connecting workers to available jobs.
While he counts Gov. Christie among the politicians he most admires, he also lists Jersey City Councilman and 2013 mayoral hopeful Steven Fulop and Newark Mayor Cory Booker – both Democrats – as elected leaders he also respects.
Terry could well be cut from the Fulop/Booker cloth. Fulop, a U.S. Marine vet who works in the investment banking industry, first won his Ward E council seat at age 28 and could become Jersey City mayor before age 40. Booker, a Rhodes Scholar who attended Stanford University and Yale Law School, became a Newark City Councilman at the age of 29 and first ran for mayor in his early 30s. He was elected mayor of Newark at age 37.
“I would say they are role models of mine,” said Terry. “And by me running for City Council, I hope other young people in my community look at me and decide to run for office themselves.”
E-mail E. Assata Wright at awright@hudsonreporter.com.