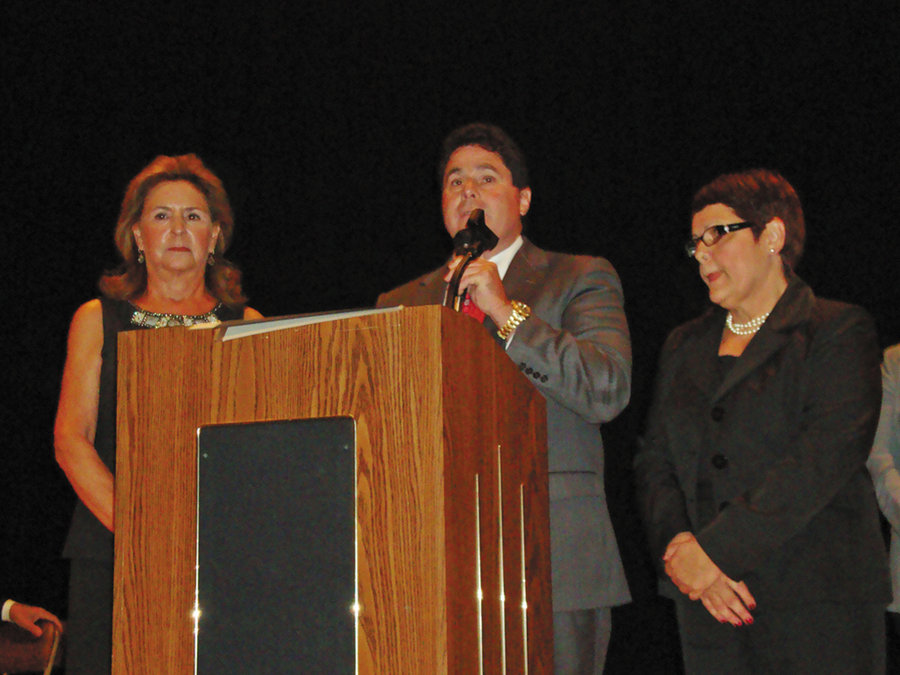 West New York Mayor Dr. Felix Roque swore in two new Board of Education members at a meeting on Tuesday, replacing two members appointed by his predecessor.
The ceremony at West New York Middle School took place in front of a large and rather vocal and energetic audience, due in part to the recent controversies surrounding the board.
New members Adrienne Kole-Sires and Vilma Reyes replaced Janet Passante and Alexander Locatelli, both of whom had been appointed by former mayor Silverio “Sal” Vega right after Vega was defeated by Roque in the May municipal elections.

In with the new

Kole-Sires is the wife of Congressman Albio Sires, a former West New York mayor. She has lived in the city since 1965 and has taught French at Memorial High School. She has served as the elementary school’s supervisor for the gifted and talented program, as director of the Early Childhood Program, and as assistant superintendent of schools.
“I’d like to see the taxpayer’s dollars used wisely and in the best interest of all our children,” she said on Tuesday night, drawing applause from the audience.

She concluded her acceptance speech with a quote from John Dewey, stating that “education isn’t preparation for life. Education is life itself.”
Reyes has lived in West New York for 25 years, serves as the head of the crossing guards for the town, and helped Roque during his campaign. She thanked the mayor and the audience for believing in her.
“I promise to work with everyone to do a better job and to improve our educational system,” she said in Spanish.

Dr. Roque filed a complaint with the State Commissioner of Education in July arguing that when Vega appointed Passante and Locatelli, the act violated a New Jersey statute that prohibits any board appointment between the first and third Tuesday in May of an election year.
This was not Roque’s only complaint against Passante. In September, the town of West New York filed a civil action complaint against her alleging that, upon her retirement, she falsely claimed $306,324 of back pay for accrued vacation, sick time, and compensatory time. That complaint is still pending.
In response to the complaint about their appointments, the state commissioner of education in mid-September ordered Passante and Locatelli to step down.

But Roque didn’t stop there. He would like to see a third member of the five-member board also removed.
Cosmo Cirillo, who also had been appointed to the board by Vega last year, may have to step down as well. The Advisory Committee on Outside Activities of Judiciary Employees released a letter in August ordering Cirillo, who is the board president, to resign. His dual role as the Alcohol Beverage Control Board secretary in town conflicted with his spot on the board.
However, Cirillo remains on the board. He did not attend Tuesday’s swearing-in ceremony.
In front of the audience, Roque said, “He’s not here tonight. I had to say that.” The audience responded with laughter as he lightened the mood a bit and added, “Creo que está enfermo,” which means, “I think he’s sick.”

Dr. Roque spoke enthusiastically about his two new board members and expressed that he felt hopeful for the new future of the board.
He commended Kole-Sires on her “phenomenal job with the school,” and declared Reyes a “phenomenal human being.”
“We want to get people who really care about working with the children,” he said, “because that’s what it’s all about: the future of our kids.”
As for Passante and Locatelli, Roque said, “They were doing the wrong thing by being here. I promised this school that I’m not letting politics get involved in our children’s education. I need educators to take care of our children, not politicians.”