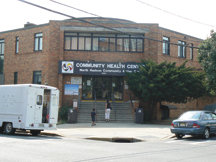 This month, the North Hudson Community Action Corporation (NHCAC) is collaborating with the New Jersey Department of Health and Senior Services (NJDHSS) Immunization Program to offer five vaccinations for free to everyone from newborns to seniors at NHCAC’s public health centers in Union City and West New York.
The program, made possible by funds from the federal government allocated under the American Recovery and Reinvestment Act, is being conducted just as parents rush to get checkups and vaccinations for their kids before they return to school.
NHCAC is encouraging all residents to take the opportunity to protect and promote their health and the health of their families, and their community – but some Hudson County residents may not be lining up anytime soon.
After a study published in a medical journal, The Lancet, in 1998 showed a possible link between the MMR (measles, mumps, and rubella) vaccine and autism, some parents began to show concern about the growing list of vaccines their children are mandated to take. And although that study was discredited and more recent studies “found no evidence of harm” from vaccines, many people nationwide, including some high-profile celebrities, are still pushing the cause of vaccination research and choice.

Louise Kuo Habakus, a member of the New Jersey Coalition for Vaccination Choice, which held a session last year at a restaurant in Hoboken, is also the director and founder of The Center for Personal Rights, a non-profit organization based in Middletown.
Habakus said she got involved in the fight for vaccination choice after two of her children were injured by vaccines. She said they developed inflammatory bowel disease, which got progressively worse after each vaccine.
However, she stressed that the injuries her children faced may be less or more severe than what others could face.
“Vaccine injury manifests very differently in different people,” said Habakus.
A former corporate executive, Habakus took on the mission of poring over studies in her quest to advocate for research, education, and informed consent when it comes to vaccination and ultimately became a holistic health practitioner.
According to Habakus, children in New Jersey receive 45 doses of 13 vaccines by the time they enter kindergarten – a threefold increase over the past 25 years.
Habakus added that New Jersey is the only place in the world that mandates the flu shot for kids.
“We mandate more vaccines than any other place in the world,” said Habakus. “We also don’t have the gold standard when it comes to choice.”
Vaccines are recommended at a federal level by the Center for Disease Control and are mandated by each state’s Department of Health.
New Jersey tops the list of most mandated vaccines, which parents may only refuse for religious or medical reasons.
Texas, the state which mandates the second highest number of vaccines, also allows exemptions based on philosophical or personal beliefs.
“Even if [the vaccines are] okay, you still can’t mandate people to do it,” said Habakus. “At the end of the day, if you don’t have the right to make fundamental decisions about what goes into your bodies, what does freedom mean?”

Habakus said that New Jersey is the leading state with children with autism and learning disabilities. Autism is a complex developmental disability that affects a person’s ability to communicate and interact with others.
In New Jersey, the autism rate is 1 in 94. Some have said the high rate is due to the many resources that exist in the state, a situation that draws people with autistic children to move here. In addition, more children may be diagnosed here.
Habakus pointed to the fact that the Garden State gives more shots, offers no vaccine choice, and is the U.S. and worldwide headquarters for over half of the world’s pharmaceutical firms.
“Is that a coincidence?” she said. “The pharmaceutical industry is such an important tax base in our state, you could argue that it would be impossible to be elected in New Jersey without pharm support.”
Habakus said that sufficient research has never been put into vaccines to see who is susceptible to possible complications prior to administering vaccines, because the people conducting the studies are the same ones selling the product.
“We’re not saying don’t vaccinate,” said Habakus. “We’re just saying do your research.”

Habakus said that Gov. Chris Christie is “showing leadership and foresight” on the issue of vaccination choice, as evident from a letter her organization received from Christie last year in which he said he will “stand with” families as governor in their fight for greater parental involvement in vaccination decisions that affect their children .
According to the results of a recent Harris Interactive poll conducted in May, vaccination choice is a mainstream parental issue with over half of parents responding that “parents should have the right to decide which vaccines their children receive without government mandates.”
Although Christie has been focused on budget issues for the first part of his term, Habakus said she is confident that he’ll remember his campaign promise to stand with families like her own.

Though Habakus and others may be questioning the validity of vaccines, representatives from the NHCAC maintained that the vaccines they are making available can be of use to the general population for everyone from newborns to the elderly.
Representatives from NHCAC said that misinformation about vaccines could make some patients and/or their parents decide not to receive immunizations, which could put them and others at a greater risk for illness.
“The North Hudson Community Action Corporation Health Centers agrees with the position of the Center for Control of Disease and Prevention,” said NHCAC President Christopher Irizarry. “Vaccines work best when most members of a community are vaccinated. We at NHCAC work each day to help eradicate communicable diseases in every way we can.”
For more information on this vaccine programs and/or other health center services, call NHCAC Public Health/Infection Control Coordinator Anny Taveras at (201) 863-5823 or visit www.nhcac.org.
For more information on the New Jersey Coalition for Vaccination Choice, visit www.njvaccinationchoice.org.
Lana Rose Diaz can be reached at ldiaz@hudsonreporter.com.

The following vaccinations are currently available at NHCAC centers in Union City and West New York for free: HPV vaccine, TDAP vaccine, Meningococcal vaccine, Pneumococcal vaccine, and Prevnar 13.
Although the vaccines are free of charge, minimal administration fees may be applicable. Vaccinations can be accessed at the NHCAC health centers located in Union City and West New York sites.
Walk-in with no appointment required at the West New York site on Mondays -Thursdays (5 p.m. to 9 p.m. and Sundays 8:30 a.m. to 2:30 p.m.), and at the Union City site Mondays through Saturdays 8:30 a.m. to 5 p.m.
For more information, call (201) 863-5823.