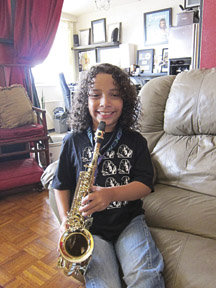 For one young Guttenberg resident, jazz has always meant freedom of expression. So the pint-sized saxophone player created a video depicting how his love of music was protected by the First Amendment, and entered it into a national contest.
Samuel Caruana, 9, has been playing the saxophone since he was 5. After being allowed to join Anna L. Klein School’s band this past year, at a younger age than normally allowed, he felt that he should give back to the school by highlighting how it helped him. His mother Mauricette said that they can’t fix the school’s budget woes, but they can bring attention to its music program.
Some of Samuel’s peers had been talking about submitting videos to YouTube.com contests, so he and his mother decided that this would be their summer hobby.
They entered “1 For All,” a First Amendment education program being sponsored by The First Amendment Center, the John S. and James L. Knight Foundation, the McCormick Foundation, ASNE (American Society of Newspaper Editors), and the Newseum (a newspaper museum) of Washington, D.C.

The contest asked for 30-seond videos that either showed the right to speak, to rock, or to assemble with friends. Samuel’s video, which depicts how the First Amendment protects his right to love jazz, was chosen as one of the top 10 finalists last week.
On Aug. 31, a grand prize, and first and second prize winners will be chosen. The winner will have the videos showcased online, on television, and at the Newseum as a part of a national campaign.
“Well, [jazz] expresses yourself and it helps people to better understand you, and it shows freedom,” said Samuel. “I was pretty shocked, because I was excited [and] I hope I could win.”

“Education is good because you’ll know more about yourself and you’ll get a connection,” added Samuel.
Samuel said that the “1 For All” campaign also interested him because of his love of politics. He first got interested in politics because of his “favorite presidents,” which include George Washington, Thomas Jefferson, and Franklin Delano Roosevelt.
“It’s important for people to know about politics because sometimes politics can help you,” said Samuel.
On his Youtube.com page, Samuel says that without the Freedom of Speech, his jazz idols, like Kenny G, Miles Davis and Louis Armstrong, would have never been able to create their records.

Mauricette, a songwriter, and Jim, a freelance sound technician, knew their son had a penchant for jazz before he was born.
Mauricette said that when she was pregnant, they were driving to Williamsburg, Va. listening to classic rock, but her baby kept kicking, so she started tuning through the radio, figuring that maybe he wasn’t enjoying the music. A jazz station was the only thing that would keep him calm, and when he was born prematurely and had to stay in the hospital, the music genre also soothed him.
By 2, he played his “note saxophone,” a rolled up piece of paper his father made for him. By 4 he was asking for his own saxophone and had the ability to sing in perfect pitch.
At 5 they enrolled Samuel in music class, where he started with the recorder and piano, before being able to play his own saxophone at 6.
Today he practices his scales, breathing, and improvisational skills for two hours a day. He also studies the piano and would like to play a “little guitar” after he masters the saxophone.
“I hope to be a famous jazz musician,” said Samuel.

When Samuel was young, his father Jim was working in a studio when Kenny G’s long time producer and arranger, Walter Afanasieff, invited him to the studio.
Samuel sat by the piano with Afanasieff, who played some of his favorite songs for him.
Due to Samuel’s age, the length of his arms and his wind, he is not yet able to play a “straight” saxophone, but Afanasieff has told Kenny G, Samuel’s favorite jazz musician, about his talent.
“Kenny G said that if Sam practiced enough and got into band and he keeps his eyes on him, he’s going to give him one of his straight saxophones,” said Mauricette, who expects Samuel will be ready this year, if not the next.

Samuel said that the saxophone can be a “stubborn instrument,” but that it his favorite. He named his instrument Donna after the song “Oh Donna,” by Ritchie Valens.
He also has entered two videos to Disney’s U Rock 2010 contest. In one he dances, and in another he sings. The contest winner will fly out to Disneyland in California.
To check out Samuel’s “1 For All” video, as well as the other finalists, visit www.youtube.com/user/1forall.
Tricia Tirella may be reached at TriciaT@hudsonreporter.com.