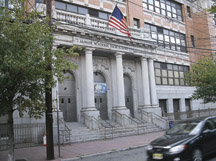 When Jersey City’s McNair Academic High School is mentioned in any conversation, the talk is usually about its ranking as one of the top high schools in New Jersey, if not in the country. It often does well in polls in New Jersey Monthly and other magazines.
What doesn’t get mentioned much are the shortage of paper supplies, the computers that crash, the aging textbooks.
Yumi Hinnenkamp, a 16-year-old incoming senior, doesn’t like that downside to the city’s premier scholastic institution – which requires a tough admissions exam – and she is determined to do something about it.
Hinnenkamp, who lives in Journal Square, started a drive earlier this month for her school to win $500,000 from a contest sponsored by Kohl’s Department Store. Specifically, she created a Facebook page, “$500,000 for McNair Academic HS!” that lists the internet link to the contest page.

The contest, Kohl’s Cares for Kids $10MM Giveback Contest, was created to celebrate the 10th anniversary of the department store’s Kohl’s Cares charity arm. Participants can visit the contest’s Facebook page and vote for their school(s) as well as submit a short comment on how they want to see the money used.
Participants get 20 votes, with five votes allowed per school. The 20 schools with the most votes will receive $500,000 each. The contest ends on Sept. 3.

As of the end of last week, McNair Academic, located on Coles Street in downtown Jersey City, had gotten over 5,000 votes and was ranked number 43 amongst the top 100 schools. The top school at that point was Lake High School in Milbury, Ohio, with approximately 32,000 votes.
Hinnenkamp said last week that she is confident that McNair can make it into the Top 20 by the time the contest ends.
“It took only a week to make it to 5,000, so I think it is possible that we will get [to the Top 20],” Hinnenkamp said.

Ran out of paper

Hinnenkamp cited problems from the past school year as an inspiration for her to try to interest present and past McNair students to help their school win $500,000.
“One of the first things I think about is in my journalism class; we didn’t have enough paper,” Hinnenkamp said.
Hinnenkamp said if McNair wins $500,000, it should go not only to purchasing paper supplies, but also new computers, new textbooks and athletic supplies for the school’s sports teams, including the tennis team, which Hinnenkamp captains.
She is inspired and “encouraged” by the support from current students and alumni.
One of those alumni is 19-year-old Therese Bailey, a 2009 McNair graduate. Bailey, who grew up a block away from the school, is currently enrolled at Cornell University, where she is studying veterinary science.
Bailey remembers the shortages she saw in the 600-student school during her time there, and how the lack of space in the school led to students sharing lockers and separate shifts for students eating in the cafeteria. She wants to see the $500,000 applied to remedy that situation.
“I am at Cornell because of this high school,” Bailey said. “This is not just a school with high academic rigor but also a diverse high school with a great collage of experiences.”
Bailey set up a page on her blog, Shrapnel and Daises, to inform the public about the contest: http://theresekathryn.wordpress.com/2010/08/03/my-high-school-needs-your-help/
Also, the public can go directly to the contest page for McNair: http://apps.facebook.com/KohlsCares/school/595351/dr-ronald-mc-nair-acad-hs. There they can vote for the school or any others they choose.
And for rules and other information, check out: http://a1.kck.contextoptional.com/images/KCK_toolkit.pdf.
Ricardo Kaulessar can be reached at rkaulessar@hudsonreporter.com.