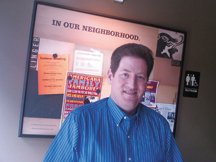 “TV has a way of keeping people that aren’t on it unimportant,” said writer and longtime Hoboken resident John Bredin. “I mean, who’s going to get invited on to [the TV show] ‘Hannity?’ You have to write a book or be some kind of expert. There needs to be an in-between space where people can get over political apathy.”
To that end, the outspoken Hoboken resident – who frequently writes liberal-leaning letters to the Reporter and provokes indignant responses – recently decided to create a local cable TV forum for the average citizen.
After years of hosting local “salons” – a round table conversation often associated with 17th and 18th century France – Bredin formed “The Public Voice Salon,” an hour-long TV show airing on public access channel 19, Thursday nights from 8 to 9 p.m.
Everyone is welcome to join the discussions, usually about “culture, politics and the burning issues of the day,” but space is limited to about 15 participants at a time, due to the intimate nature of the conversation.

Bredin’s discussions start by gathering a group of citizens in a circle. His first formal salon was held at Symposia Bookstore on Washington Street back in 2002.
“The first night was so successful that we started at around 7:30 p.m. and didn’t finish until well after midnight,” he said. “People spilled onto the sidewalk afterward.”
Bredin, a City University of New York English professor, sees the TV show is a way to grow intellectually through an informal and often impromptu discourse. Many of the shows have been taped at Symposia.
Bredin’s goal is to better “learn the art of being in a democracy,” he said.

Although just in its “pilot season,” the show was recently picked up by New York public television, allowing Bredin and his guests the chance to lend their voice to a much wider audience. He hopes to expand his dialogues to cafes in Manhattan, where he can tape upcoming seasons.
“I almost couldn’t believe it when they told me,” he said. “[The channel] has up to half a million subscribers. Plus, they broadcast online and around the world.”

On the first aired episode of the TV show, Bredin and five guests, including residents of Hoboken, Edison, and other northern New Jersey communities, talked about the “breakdown in society” in which residents don’t want to make changes to local government because “it easier not to get involved.”
Hoboken resident Natacha Braxton recalled demonstrations and protests in decades past, and wondered why “everyone, and this goes for me too, is so self-involved in doing the same day to day routine, instead of getting out and making a change.”
Part of the show focused on five-year Hoboken resident Liz Adams as she recounted the infamous murder of Kitty Genovese, who was brutally stabbed outside of her apartment building in New York City in 1964 while neighbors neglected to call for help. The psychological phenomena later became known as the “bystander effect.”

Bredin is an Edgewater, N.J.-native and educator who has been in Hoboken on and off for more than 20 years and started his career substitute teaching in Hoboken public schools.
Graduating with a master’s degree in English education from New York University, Bredin said many of his classes taught “very post modern,” theories of education – “a movement to re-imagine how English is taught in this country.”
He went on to teach at universities all across New Jersey like Rutgers, Montclair State, and the Stevens Institute in Hoboken. He taught many of his classes in a salon format.
“I would have these staged talk shows with the kids,” Bredin said. “This was the early days of ‘The Rikki Lake Show,’ and we would have topics and pick a guest and a host.”
The improvised discussions might not have been as sophisticated as a proper salon, but were well worth the effort, he said.
“Sure, sometimes the conversations got rough and rowdy,” he said. “But at least they were organized and focused, and the kids were having a good time while they were learning.”
For more information on the show, contact Bredin at jfbredin@hotmail.com.
Sean Allocca can be reached at editorial@hudsonreporter.com