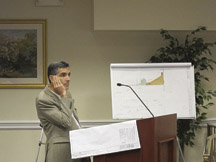 The North Bergen Planning Board recently held its second hearing for a developer who hopes to build a five-story building along the Palisades Cliffs, close to the high-pressured Transco gas pipeline and Guttenberg’s Galaxy Towers.
The more than two-hour meeting was held on July 29 for Appleview, LLC, which is being represented by attorney Carmine Alampi. It featured testimony from Appleview architect Jose Carballo and engineer Calisto Bertin.
While at the first meeting, Carballo had presented the development as a 60-unit building, it has been slightly scaled back to 59.
The developer is asking the board for a variance that would allow them to build on the 2.3-acre site, located at 7009 and 7101 River Road, although the minimum size of five acres is required under the municipal ordinances for a project of this size.
According to Alampi, the building will also need another variance due to it covering a slightly higher percentage of the lot than the township allows. They also applied to consolidate the four different tax lots of the property into one.

The project has already been scaled back from a 140-unit concept.
Opponents to construction include nearby residents who believe construction is too close to the Williams Gas Pipeline, which runs from Texas to New York City. At the meeting, Bertin said that the line runs under River Road with no restrictions. He said that he can’t state with “certainty” that the line, which crosses into the property in the cliffs, has no weight restrictions for what can be built over or near it.

Since the building will have one less parking space than required for the originally planned 60 units, it will now include 59 units sharing 116 parking spots, said Carballo. The northwest corner of the first floor will have an exercise room instead of a condo.
The building will still have a ground floor parking area, second and third floors comprised of 1-and 2-bedroom units, and penthouse duplexes that will extend to the fifth floor.
Changes were also made to some of the units. At the last meeting, many residents questioned why the building had so many community rooms. Instead each floor will have 24 storage areas.
Another criticism was that residents could turn the office area of the penthouses into another bedroom, which could exacerbate parking. Carballo said that there will no longer be walls in these rooms, which should prevent this from happening.

Where is the cliff?

In Bertin’s testimony, he stated that the property was being built on mostly the “flat surface” in front of the Palisades Cliffs, and that only a small piece of the “exposed cliff” exists on the property.
He said that only a small portion of the slope will be disturbed, and that for the most part, this area is above where the former Galaxy Towers tennis courts are now. That area of rock had been stabilized years ago for the courts, he said.
Bertin said that Johnson Soils, a company of which he is a principal, has done soil borings in the area that prove that there are very little rock on the property.
“It’s not to say that there won’t be outcroppings,” said Bertin. “We won’t be effacing the face of the Palisades for this building.”

Is it touching the cliffs?

During the meeting, several members of the board, as well as the Galaxy Board of Trustees Attorney John Lamb, asked about the slope of the project and whether portions of the cliffs will have to be removed.
Bertin said that he did not know exactly what slope the property was at. So Lamb asked which portions of the slope were more than a 30 percent incline, and Bertin said he did not know. Lamb then asked what Bertin considered to be the Palisades Cliffs.
“Cliff, I would say, a term of art, is exposed rock,” said Bertin, who explained that he did not consider the soil and rock below the exposed cliff face to be a part of it. He said that at this site, there is very little “cliff.”
Lamb questioned whether or not Bertin’s definition of the cliff is right and asked if Bertin could excavate up to the cliff face because the rest of the property isn’t a part of the cliff. Bertin said that he could, but that the project will not do so.
Board member Robert Baselice commented that everyone was using different definitions.
“[Mr. Bertin, you] are using ‘rock’ where Mr. Lamb was using slope and I’m using cliff,” said Baselice. “If the cliff comes down, does that part of the cliff, not the cliff face – doesn’t the cliff jut out at the bottom? You define the rock as being a part of the cliff. Is it a part of the Palisades?”
Bertin said that the “hard surface” was once a part of the Palisades, but that he doesn’t consider it part of the cliff anymore.

Too much impervious surface?

Bertin also said that the building will leave 47.2 percent of permeable surface on the property, meaning water can soak into it. He also said that the building would have a green roof, with different grasses that would collect water, as well as a rainwater containment system that will be housed under the garage.
Galaxy resident Jeremy Raben did not agree. He said that roof should still be considered impervious, even if plants are grown there.
“The area, in fact, which is not impervious, is this little strip here [along the side of the building] and this little strip that is as narrow as 10 feet [on the other side], so this is the only area that is not steep slope that is permeable ground on this property,” he said.
Raben said that Bertin was using the cliff as permeable surface, which in a rain storm would just allow water to run down rather than catching it.

At the next special meeting for Appleview, Lamb and residents will be able to continue their questioning of Bertin and Carballo. The meeting is set for Wednesday, Sept. 29 at 7 p.m.
Tricia Tirella may be reached at TriciaT@hudsonreporter.com.