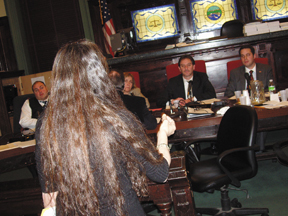 The city has approved tax bills to be sent out, and residents should not expect any relief.
Tax rates for the third quarter are the same as the last two quarters: a 47 percent increase from last year, including an 84 percent jump in the municipal portion.
The next three quarters – the fourth quarter of 2009 and the first two of 2010 – are unlikely to change very much, either.
Even if the city is able to lower taxes for the fourth quarter, the next two quarters after that will be based on an average from the previous four.
At the beginning of the fiscal year on July 1, the city does not have a budget to base first and second quarter tax bills on, so they use the average of the year before.
Only Michael Russo voted against the approval of tax bills, although it was not apparent why he did so. Fiscal Monitor Judy Tripodi has the authority to approve the bills regardless of how the council voted.

No funding, no bonding

As the creation of the city budget slowly moves forward, and residents still seethe over climbing taxes, council members are beginning to convey the taxpayer’s displeasure by voting down funding for the city.
In the past, measures like these have actually shut down the city, but Tripodi can appropriate the funds herself now.
Councilpersons Theresa Castellano, Peter Cunningham, Beth Mason, Michael Russo, and Dawn Zimmer all voted against temporary emergency appropriations to fund city operations until a budget is adopted.
In addition, the council did not approve a $2.2 million bonding measure put forth by the fiscal monitor to upgrade the robotic garage at 916 Garden Street. The software and hardware upgrades were completed two years ago, but the paperwork to bond was never approved by the state.
Without the bond, the city was forced to pay the bill from an “interfund” and asked the council to float the bond to replenish the fund.
Several members of the public asked why the Parking Utility could not use its own profits to fund the project.
“The money was there in the Parking Utility,” Lane Bajardi said. “Borrow where you can to hide the overspending,” is the city’s motto, he said.
A statement from Tripodi read by the council explained that the bonding would not impact the taxpayers. But resident Dan Tumpson questioned that.
He asked about the fees for issuing the bonds and the cost of the bond attorney to negotiate the deal.
“Someone is going to pay for it,” Tumpson said. “The taxpayer is going to pay for it.”
Councilmembers Castellano, Cunningham, Mason, and Russo voted down the bonding measure, which needed six votes to pass. Councilmembers Ruben Ramos and Zimmer abstained.
Ramos said after the meeting that once four votes were against, it was obvious to him that the measure was not going to pass.
At the end of last week, Tripodi did not respond to a series of questions about how the city is handling these issues.

The city has taken some heat on an employee early retirement program that was not properly vetted by the state pension board last year.
According to a memo from Tripodi last Thursday, the early retirement mistake will cost the city $4.2 million in this year’s budget and, according to sources, the employees that accepted the early retirement incentive are now filing a lawsuit against the city.
Tripodi was not available for comment on Friday.
Mayor David Roberts said the city based their incentive program on a similar program in Newark, although the state never approved the same arrangement for Hoboken.
“I intend to defend the city of Hoboken and argue that what Hoboken did is very similar, if not the same, as what Newark did,” Roberts said. “It’s a tremendous program worth fighting for.”
He said the council approved the measure last year and that it had already saved the city $3 million, although he could not explain how the savings were found since the program was cancelled by the state shortly after it began.

The council approved an ordinance increasing several parking violations by varying amounts on second reading last week.
The increased revenues, according to Council President Nino Giacchi, will allow Tripodi to repeal a resident parking permit increase that was passed at the end of last year.
The city is still deciding how they will reimburse residents who have already paid for their current parking permit at the higher rates.
The council had previously voted down the violation increases, even after Councilwoman Terry LaBruno said that permits would increase if violations didn’t. Council members now justify the violation increase because a permit hike would only affect residents.
“I had to strike a deal to bring this back,” Giacchi said at the meeting.

Tripodi is seeking to create a new city department for revenue and finance, which was previously a division under the department of administration.
The council tabled the ordinance at their previous meeting, but approved it on the first of two readings last week.
The council will hear public opinion and vote on it for the final time at the next meeting on Feb. 18.
Tripodi has already hired a director for the department – which she is entitled to do – but only the council can enact a city ordinance creating the department.
Finance Director Nick Trasente made his first appearance at a council meeting last week.
Trasente is being paid $125,000 by the city for his financial expertise. He was a former colleague of Tripodi’s.
The council approved the appointment of a new tax collector last week as well.
Under direction from Tripodi, the council approved the appointment of Sharon Curran at a salary of $112,000 per year.

Forde Prigot asked whether the council will require financial disclosure from the new tax collector, Sharon Curran, who was recently appointed by Fiscal Monitor Judy Tripodi.
According to regulations, certain high-ranking municipal employees are required to submit a financial disclosure form to show where they have vested interests. This form allows the public to see possible conflicts of interest.
The former tax collector, Louis Picardo who retired on Jan.1, never submitted the form even after being specifically asked to do so by the council.
The council gave no indication that they would make any special request of Curran in her hiring resolution, but said she is responsible to complete the report per legal requirements.
Helen Hirsch said she recognized a pattern in the recent hires of a finance director and tax collector. Both are choices made by Tripodi and had previous working relationships with her.
Hirsch said she had seen it before. “Nepotism,” she called it. Then she chastised the council for letting it happen. “You are encouraging the same unfortunate arrangement.”
Hirsch, later in the meeting, offered an alternative to the mayor/council form of government, which she has referenced before.
She spoke at length last week about changing Hoboken’s government to a municipal manager system, or rather a manager/mayor/council system. In that setup, the council would appoint a manager of the city to execute the work of the council.
All execution of government services would be handled by the manager, appointed by and responsible to the council. The mayor in the manager system, which is used in Hackensack, is generally just responsible for board appointments and overall guidance of legislature done by the council.
Hirsch quoted a Rutgers report citing the two top reasons for a municipality to change its form of government: 1. Population increase, 2. Frustration with issues major and minor.
Hirsch said both are at play in Hoboken, which would make it ripe for a change.
Maurice “Moe” DeGennaro has been pressing the council for an update on administrative hearings for several policemen facing discipline over the SWAT scandal, and the ensuing Corrigan Report detailing mismanagement in the police department.
The city has said that the hearings are not public and that residents will be made aware of the outcome when appropriate.
Dan Tumpson asked the council why upgrades were needed at the robotic garage two years ago as they were voting on a bond that would fund the project in retrospect. “Was it the fact that you had to replace the software because (original owner) Robotics wasn’t in on it anymore?” Tumpson asked.
Councilman Peter Cammarano said, “It was the fact that the garage was eating cars and we had to get it to stop eating cars.”
Councilman Peter Cunningham quipped, “So we fed it money.”
Laughter ensued and the council did not approve the bond.