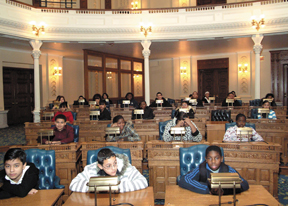 Assemblyman Ruben Ramos Jr. has three public jobs – Hoboken city councilman, teacher in the Paterson schools, and 33rd District Assemblyman – but he is planning to eliminate one. He has said he won’t run for council again this May, but will run for another Assembly term in the Democratic primary in June. He said the coinciding campaigns are the biggest reason he will not seek council re-election
However, that puts him in an unusual position.
Sources have said Ramos is being pressured to endorse one of the rumored Hoboken mayoral candidates currently on the council, in order to get the backing of certain leaders when he runs for re-election to the Assembly in June.
When he first won his seat in 2007, Ramos was backed by State Sen. Brian Stack, who is likely to support Councilwoman Beth Mason for mayor in Hoboken this May. Some believe Stack is now pushing Ramos to endorse Mason.
However, last year, Ramos had a battle with Mason when he introduced a measure to discourage her from suing Hoboken University Medical Center for public record disclosure. Ramos’ act was largely panned by the rest of the council, with only Councilwoman Theresa LaBruno supporting it at the time.
Ramos would not comment about whom he might endorse last week. “I want to have a working relationship with whoever wins,” he said.
He said he has not counted out any of the currently rumored mayoral candidates: council members Beth Mason, Dawn Zimmer, Michael Russo, or Peter Cammarano, and school board Trustee Frank Raia.
Although Ramos was a running mate of Cammarano in 2005, he said he is not vocally supporting his colleague’s potential mayoral run right now.

Ramos is one of the few members of the Hoboken City Council who (as of this writing) has decided not to run for mayor, although that could change. The Hoboken council has had a tumultuous year, dealing with a 47 percent property tax hike and a state takeover of their finances.
Through it, Ramos has tended to his other two jobs and been relatively quiet during council meetings. Some wonder how he could handle all three jobs.

Ramos won his Assembly seat during a countywide political coup in 2007 spearheaded by Union City Mayor Brian Stack, who was a state Assemblyman and wanted to move up to state Senator. The county machine, the Hudson County Democratic Organization, didn’t support his ambitions, so he started his own group, the Democrats for Hudson County.
Stack drafted Ramos and Caridad Rodriguez to fill his ticket as Assembly representatives of the 33rd Legislative District.
Although Stack, Ramos, and Rodriguez were elected, the Stack-backed candidates in other legislative districts in the county lost to HCDO candidates.
Last week, Ramos said that juggling the three jobs was easier than when he had just two, teacher and councilman. “Before, it was my wife and my oldest daughter as secretary,” Ramos joked. Now, his position as assemblyman allows him to spend $110,000 per year on legislative aides, and he spreads it out to six or seven people, including chief aide Mark Albiez – who is the former aide to Assemblyman Louis Manzo – and former Hoboken City Council President Richard Del Bocchio, as well as a secretary.
Stack, Ramos, and Rodriguez have consolidated their staff, so Albiez is really the chief staffer for the 33rd District triumvirate, Ramos said. The other legislators each also get $110,000 for their staffs.
Both Ramos and Rodriguez have primary elections coming up on June 5, while Stack’s term carries him into 2011.

Ramos, who as a young Hoboken leader spoke at the Democratic convention in 2004, said last week that his life experience has guided his legislative agenda.
He was diagnosed with the cancerous Hodgkin’s disease in 1999, while still on the council, and is forever grateful that he had medical insurance at the time.
Within two days of his noticing a lump, a tumor the size of a fist was bulging out of his neck. Doctors were able to treat the tumor, and Ramos was declared cancer-free by 2000. But the treatment center was in New York, where they do not reimburse hospitals for uninsured patients. “If I didn’t have insurance, I would have been back in New Jersey filling out paperwork,” Ramos said, noting that the tumor would also have spread to his throat and lungs if it had taken too long to treat.
As soon as the opportunity presented itself, Ramos joined the fight in Trenton to secure medical insurance for all children in New Jersey.
Ramos was a primary sponsor of S1557, a bill that expanded the NJ Family Care program and will provide health care coverage to children across the state, and was on hand when Governor Corzine signed it into law.
Ramos is also a sixth grade teacher at P.S. 15 in Paterson, and said he holds education in high regard.
He said the state is poised to begin construction and renovation of schools – including Connors Primary School in Hoboken – but is just waiting for the go-ahead.
Ramos said one thing New Jersey does well is preparing in case federal stimulus money becomes available.
“At the end of the day, the state just wants to put shovels in the ground,” he said.
Ramos is pleased with the progress he has made, but can’t believe his term is already up.
“I feel like I got sworn in yesterday,” Ramos said.

Ramos says he is doing his best to use his council and Assembly positions to favor the citizens of Hoboken, but said the state financial takeover is best handled locally. The only advantage his state seat gives him is a network of contacts, but no real course of action.
“This is an extremely rare situation,” he said. “There’s no pamphlet on dealing with it.”
He said he knows that Stack, in his role as state Senator, has spoken with Hoboken Fiscal Monitor Judy Tripodi on a few occasions and with the state Department of Community Affairs.
Statewide, Ramos said his focus is on getting property tax rebates that would help alleviate some of the pain across New Jersey.
Ramos is also facilitating discussion about consolidating services with nearby municipalities, like the possibility of sharing a municipal garage with Union City and Weehawken, he said.
As far as the next mayor is concerned, Ramos said he is waiting to see who emerges.
“I’ll be listening to whoever has the best platform,” he said.