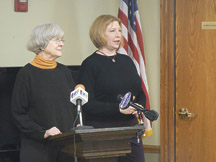 The Township of Weehawken announced the 150th anniversary of the incorporation of the township and unveiled the book “Weehawken: Images of America,” at a press conference last week.
Members of the Town Council and the Board of Education were on hand to present the book and a list of 2009’s upcoming events in celebration of the anniversary (see sidebar for details.)
In addition to a number of planned events, the Township will also host a variety of contests, games, and activities. Some of the contests include a search for the family living in Weehawken the longest, designing a town seal to be printed on a flag, a “How Weehawken has changed since 1859” essay contest, and a “My Town” photo contest showcasing the Weehawken community. For updates, visit: www.150years.weehawkenhistory.org.

The book, “Weehawken: Images of America,” published as a part of Arcadia’s Images of America Series, is a collection of over 200 pictures documenting Weehawken’s past. According to coauthor and member of the Weehawken Historical Commission (WHC) Lauren Sherman, Weehawken was relatively rural until the late 19th century, allowing for quite an interesting development history. From the historic Hamilton-Burr duel to the most innovative water tower of its day, the book is a chance for residents and history buffs to head back to the past.
“We found so many wonderful artifacts and collectibles,” Sherman said, “that we wanted to put the book together in order to raise awareness and money to help preserve the stuff we’d like to display in the future.”

Ellen Robb Gaulkin, coauthor and member of the WHC, reiterated how important it is for residents to remember their history. “People rarely ever look back and say ‘wow, there used to be a school there’, or ‘a store on the corner’. It’s a way for people to go back in time.”
The two had four months to complete the book from April to September of 2008, under strict deadline by the publishers.
“Things started coming out of the woodwork,” Sherman said. “I must have scanned 350 images.”
The book will be available to the public on the March 15, the exact date of the incorporation of the town.
“It was grueling,” Gaulkin said, “but it was fun. [It’s a] nice birthday gift to the town.”

March 15 – A reenactment of the first town meeting and a presentation of the 150th anniversary proclamation. The book, “Weehawken: Images of America,” will be introduced to the public, including a slide show, speech, panel discussion, and book signing by the authors. In addition, the Post Office will issue a commemorative postmark in honor of the anniversary.
April – The Weehawken Free Public Library will host “Taste of Weehawken,” to benefit the Weehawken Historical Commission. Weehawken will celebrate Earth Day and Arbor Day with cloth anniversary bags to promote less use of plastics. The town will also plant “anniversary” trees throughout the township.
May – An “Old Fashioned Memorial Day Parade,” will take place to honor 150 years of veterans over nine wars. The Weehawken Historical Commission will hold a slide show, book signing, and sale of the book at the Library.
June – The Township will hold an Anniversary Concert, and an 18-month calendar of historic stained glass windows from Weehawken will be distributed to residents. A discussion with illustrations of Native American cultures and traditions will be presented by the Sand Hill Indians.
July – The Recreation Department will present its “Summer of Old-Fashioned Fun,” featuring plenty of games and activities from the “past.”
August – Hudson County Conservancy Walking Tours of Weehawken will begin. In addition, a photo display of the history of the Weehawken Fire Department will be held in the library.
September 12 – 150th Anniversary Parade.
October – Weehawken Day celebrates the 150th anniversary of the Township on Oct. 3. In addition, there will be a reading of works by Edgar Allen Poe by Weehawken resident Robert Boston, Jr. on Oct. 28.
November – Historical markers, denoting places of historical importance, will be unveiled throughout the town. The newly opened “museum” in the first floor of the Water Tower will host walking tours throughout Weehawken. Each tour will begin and end at the “museum,” where participants can view old collectibles from Weehawken.
December – A “150th Anniversary Ball” fundraiser will take place to benefit the Weehawken Historical Commission. A journal will be distributed documenting the year’s events, and a time capsule will be buried to close out the year and seal the Sesquicentennial Time Capsule.

What’s in the book

Arcadia Publishing will release next month the photo-laden, 127-page book “Images of America: Weehawken” by authors and Weehawken residents Lauren Sherman and Ellen Robb Gaulkin. The book is part of the publishing company’s “Images in America” series on towns across the country.
Sherman, who is a landscape consultant to Weehawken, and Gaulkin, who serves on the Water Tower Preservation Committee and the Weehawken Planning Board, say they have often felt that Weehawken’s rich history is a story that should be shared by more than just the residents.
According to the book, Weehawken first gained momentum when James Gore King, a banking tycoon from New York City, moved his family to Weehawken in 1832. Naming his estate Highwood, these 50 acres served as the model for what Weehawken represented: exquisiteness, quiet communities, and astonishing scenery.
The book includes an 1873 map of Weehawken showing several large estates, including King’s.
“Though Hoboken, West Hoboken, and Union were already bustling cities, most of Weehawken remained a series of large estates owned by wealthy businessmen who either lived in Manhattan and chose Weehawken as their summer home or had relocated here,” the book notes.
Though James first brought attention to Weehawken, the township is probably recognized more for the famous duel between General Alexander Hamilton and then-Vice President Aaron Burr in 1804. The book shows photos of the infamous duel site, the aftermath, and the 2004 plaque that was erected to commemorate the 200th anniversary.
Known for its beauty, as well as its enormity, Eldorado was the vision of Hungarian-born businessman Bolossy Kiralfy in 1890. According to the book, which dedicates six pages to this colossal entertainment nucleus, Eldorado, which spanned over 15 acres, consisted of a “Moorish inspired casino, a Rhenish castle, and 30-foot-high fountain, a music pavilion, bandstands, and an 8,000-seat amphitheater” atop the Palisades.
The book shares dozens of photos of the town’s past and present, including churches, government buildings, parades, political events. Transportation photos include the Lincoln Tunnel, freight trains, and ferries. Those who want to compare the Weehawken of yesteryear with that of today will marvel at this impressive collection of images and detailed descriptions.
The book retails for $21.99. For more information, see www.arcadiapublishing.com. – Chris Jirau