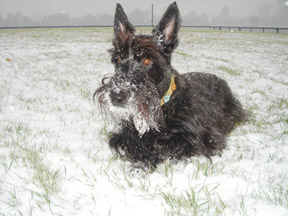 Zelda, a 7-year-old Scottish terrier, was trotting along Washington Street near 1st Street last Sunday with owner Gary Holtzman in tow when she was shocked by stray voltage on a light post.
Stories about pets being electrocuted on the street have made headlines in New York City, but no incidents of this happening in Hoboken have been reported.
Rock salt used to melt snow deteriorates wires in the bottom of the lamp posts, according to a PSE&G representative, and sometimes those wires can short-circuit, causing stray electrical voltage.
Zelda survived her shock, but many pets do not.
“She jumped about a foot back and yelped,” Holtzman said. “I knew something was wrong. She’s not like one of those toy yapper dogs.”

He said as they continued to walk, Zelda seemed fine, but he called his wife at home to see if she could find a number for the electric company to make them aware of the situation.
Ann Holtzman called PSE&G last Sunday night after the incident and a representative was sent out to disconnect the electricity to the pole until it could be repaired on Monday morning.
They said PSE&G was very responsive.
“They could have said, ‘Gee, I don’t know which department electrocution would go through’,” Gary Holtzman said last week.
The Holtzmans also called their 1st Ward councilwoman, Theresa Castellano, who immediately called city Environmental Service Director Jim Ronga.
“They were fantastic,” Ann Holtzman said of all the responders.
She said it only took two or three minutes for a woman from PSE&G to answer her call.
She said the woman was sincerely concerned and sent dispatch out almost immediately.
Ronga had workers partition off the area on Monday morning until PSE&G arrived for repairs.
He said he is working with PSE&G representatives to find a “proactive” approach to solving the problem.
Ronga also thanked the Holtzmans for making the appropriate authorities aware.
“They’re very community-minded people,” he said.

A representative from Con Edison, New York City’s electrical utility, said last week that they respond to these problems with the same immediacy.
The representative said the company also manually checks electrical structures at regular periods.
Better yet, he said, the company has partnered with a Jersey City company to build 15 vehicles equipped to detect stray voltage.
These vehicles patrol the streets on New York City and can detect stray electricity as low as one volt.
PSE&G could not immediately produce statistics to show if the problem in New Jersey warrants this kind of detection system.
But they did say that every time a street lamp is repaired, technicians test it for stray voltage.
They said they previously tested all 50 street lamps along Washington Street with negative results, but didn’t say how recently.

These incidents are more common in New York City, where resident Blair Sorrel founded the website Streetzaps.com to raise awareness of stray voltage that can shock or electrocute both pets and people.

Last May, a Husky named Sebastian was killed by a “hot” lamppost on the Upper West Side.
Ann Holtzman said last week, “It would have been absolutely devastating if we would have lost Zelda.”
The Holtzmans have another dog Leana, a Rottweiler/Labrador, and said they would be on guard for this wintry hazard in the future.