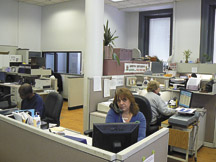 Should you have to live in the town where you work? At least three Hudson County towns including Bayonne are considering stepping up enforcement of old municipal ordinances requiring City Hall employees to live there – and in light of the cities’ budget problems, some towns are considering terminating those who don’t.
In desirable cities along the Hudson River, it’s becoming harder to maintain a residence on a City Hall salary, but some officials believe city government would run better if workers had more of a stake in the town they serve, and were easier to reach in an emergency.
At least five Hudson County municipalities have laws on the books saying their employees have to reside in town – but often, the laws are enforced only when brought to light in tough economic times or during a political campaign.
Some believe the ordinances are antiquated in an era of cell phones and superhighways, and make it harder for towns to find the most qualified people.
In light of upcoming policy decisions in Bayonne and West New York, officials are asking two questions: Do residency requirements pose a recognizable advantage to the public? And if an ordinance is on the books, why shouldn’t it either be enforced fairly, or discarded?

At a Hoboken City Council meeting last month, Councilman Michael Russo, a rumored mayoral candidate this coming May, told the crowd that because the mile-square city is suffering a huge tax increase this year, the approximately 30 city employees who live out of town should be told to either move to town or face termination. Laying them off would cut the town’s ballooning budget.
In Bayonne, Peter Cresci, the town business administrator, warned in an inter-office memo to 741 non-uniformed city employees last April that those who don’t live in Bayonne have to move back “or face termination, removal, or discharge.”
In West New York, Mayor Silverio “Sal” Vega plans to change the town’s residency requirement at the beginning of 2009, so all new Town Hall hires must move into town, if they don’t already live there.
In Jersey City, the requirement exists but is rarely enforced, officials said. That means that employees who want to skirt the law can do so without consequences – that is, unless someone makes a point of bringing it up.

Different for police and fire

According to Jersey City Municipal Clerk Robert Byrne, the residency requirement for Jersey City workers has been on the books for about 30 years, but has not been well enforced. Of the 2,940 full-time employees for Jersey City (including police and firemen), a total of 1,703 live in the city while 1,237 live out-of-town.
However, the rule in all towns is different for police and fire personnel than it is for City Hall employees. A 1972 New Jersey statute stipulates that when it comes to emergency workers, “No municipality shall pass any ordinance, resolution, rule, regulation, order or directive, making residency therein a condition of employment for the purpose of original appointment, continued employment, promotion, or for any other purpose…” That means police and fire personnel are theoretically exempt from any residency requirement ordinance.
But in several Hudson County towns, there is a one-year residency requirement for new police officers and firefighters. They can move after the first year. This apparent contradiction is allowed because two state statutes permit each town to give a preference to their residents when they hire police and firefighters. Since so few are hired each time, this ends up being a de facto residency requirement. Police and fire applicants must first take a written exam and graduate from the police academy before they are formally hired, a process that can takes a year or more.
Hoboken’s Public Safety Director Bill Bergin said regarding living in town, “It is just policy for first-year officers, part of a probationary period, and after that first year, people can move out.” He said the one-year time period is “more of an unwritten rule than anything else.”
Officials said they like the rule because first responders don’t have to travel far in case of an emergency.

Who upholds the requirements?

Regarding Town Hall employees, cities can be stricter than with law enforcement. At least five Hudson County towns have residency requirements for non-uniformed employees: Jersey City, Hoboken, North Bergen, West New York, and Bayonne. Three towns that do not have a requirement are Union City, Weehawken, and Secaucus.
All of the towns with requirements generally have a stipulation that certain high-ranking professionals (such as the chief financial officer) don’t have to live in town to be hired, if they have a “special skill” that can’t be filled by a resident. In that case, there is a preference for those from nearby counties, and then those in New Jersey, and then other qualified applicants.
When employees are found to have moved out of town, some towns simply send them a letter to remind them to comply. But other towns are starting to do more.

Some cities were sued

Paul Swibinski, a spokesperson for North Bergen Mayor Nicholas Sacco, said the reason Sacco adopted an official residency requirement ordinance in 2004 was to make sure the administration could immediately serve the community.
“The feeling is we are more connected to the community, as this administration prides itself on excellent government,” Swibinski said. “We attain those higher levels of service, we believe, because about 90 to 95 percent of the employees live in town.”
After calculating the numbers, Swibinski said that of the 400 non-uniformed employees, 321, or 80 percent, live in town.
But these ordinances don’t always last if they are challenged in court.
In 1989, the NAACP (National Association for the Advancement of Colored People) sued Bayonne, and in 1996, North Bergen. The NAACP argued that because of those towns’ resident-only policies, minorities were prevented from applying for town jobs. Since North Bergen was 98 percent white (including Latinos), they said that the policies effectively discriminated against blacks.
A ruling by the 3rd Circuit Court of Appeals in Philadelphia in 1997 found that North Bergen Township’s residency requirements were discriminatory.
As a result of the lawsuit, the North Bergen Police Department hired at least a dozen minority officers who were on waiting lists of police departments in nearby towns such as Jersey City and East Orange.
In 1991, Bayonne reached an agreement with the NAACP to relax its resident-only policy so the city could recruit African-American candidates as well (see sidebar).

Some top Hudson County officials say they believe it is best to have city workers living in town, but don’t take action to enforce the rule.
“My opinion is the more employees who do live in the city, the better it is for them, their families, and our city in general,” Jersey City Mayor Jerramiah Healy said. “Our preference is to have as many city employees living in the city as possible.” But Healy would not comment about whether he plans to enforce the town’s existing residency requirement.
The ordinance actually says that while City Hall employees have to live in town, public safety directors and the municipal treasurer can live out of town.
In Hoboken, Mayor David Roberts’ answer was similar to Healy’s.
“We would all be better off if uniformed employees and teachers lived inside our community,” he said. “However, by law, they are permitted to reside outside of Hoboken. That being said, there is no question that having policemen [and] firefighters living and working in the community would be better.”
Some residents like Jersey City’s Yvonne Balcer, a longtime community activist, are a bit passionate about municipal employees living in town. Balcer has complained at council meetings that certain policies affected the taxpayers but not the out-of-town officials who proposed them.
Balcer said recently, “You want to take care of your own, but when your own is someplace else, then why would you care about it?”
Balcer added that if employees can’t afford to live in Jersey City, they should at least be required to live in Hudson County.

Peter Cresci, Bayonne’s business administrator, has a tall order to fill early in the new year – making sure the city’s non-uniformed employees move into town. His interoffice memo, sent out in May, gave employees 180-day notice to move back in town. It applied to those hired after March 8, 1991 unless exempted by law (like police and firefighters).
There are 741 non-uniformed employees working for the city of Bayonne.
Cresci said while the majority of the employees have complied with the memo, there are some who are still not in compliance and will have to be “dealt with” by the administration.
Cresci spoke of the reason for enforcing the residency requirement for Bayonne.
“It is important that in a time of emergency, [like] snowstorms, ice, flooding, we have our workforce close and responsive to the situation,” he said. “The employees who live in town have a greater sense of familiarity with the town, the streets, the neighborhoods, the extended families.”
For those who have not complied, their fate remains to be seen.

In a recent interview, West New York Mayor Sal Vega proudly noted that the town attorney, the public works director and the police director (until recently) have all been town residents.
Vega plans to change the town’s residency requirement at the beginning of the coming year so that all new hires will have to become West New York residents within a year after they are hired. They can get a six- month extension depending on factors such as the difficulty in purchasing a home in West New York.
“You have an employee who lives in the same town where they work, and there is a level of ownership for the community,” Vega said. The town has retained a labor attorney to study the town’s current residency requirement ordinance.

Hard to get there

Bayonne’s business administrator, Cresci, said he’d like to see more firefighters and police move to his city, even if the city can’t require it. In Bayonne, the waterfront is rapidly being built up, turning a former Army base into a six-section, mixed-use development called the Peninsula at Bayonne. The city expects to add up to 3,000 residents when the development is finished. Right now, the population stands at 58,844.
“We are a peninsula,” Cresci said, “which no other highly populated city is, and accessing the city in time of emergency is difficult on a normal high-traffic day. In an emergent situation, it might be impossible.”

Litigation filed over the years has attacked residency requirements as discriminatory toward minorities, since the municipalities with those requirements tend to have a predominantly white population.
In April of last year, the National Association for the Advancement of Colored People (NAACP) filed an employment discrimination lawsuit against the North Hudson Regional Fire & Rescue squad, a fire department that serves five towns: Union City, West New York, Weehawken, Guttenberg, and North Bergen. Those towns have a 69 percent Latino population, but a less than 5 percent African-American populace.
Other lawsuits have forced changes in local towns regarding their residency-only policy.
In 1989, the NAACP sued Bayonne, and in 1996, North Bergen.
In 1991, Bayonne reached an agreement with the NAACP and relaxed its resident-only policy to allow for the city to recruit African-American candidates.
This didn’t last for long. By 1996, Bayonne had reinstated its resident-only policy after it found that relaxing the policy had not increased African-Americans on the workforce.
In 2002, Bayonne and the NAACP came to a settlement again to ease the city’s resident-only policy and to try and recruit African-Americans. – RK