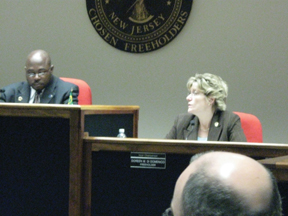 A cooperative effort between two county departments could give inmates released from the county’s prison a better shot at going straight.
“Basically, it is setting up a program to assist ex-offenders who get released in accessing benefits available to them,” said County Freeholder Bill O’Dea recently. “The county was behind the curve on it, so much so that when a prisoner was released, they had to walk from Kearny [where the jail is] to Welfare [in Jersey City] to apply for food stamps.”
The county’s Department of Corrections and Department of Human Resources are working together to solve this problem.

“Basically, it is setting up a program to assist ex-offenders who get released in accessing benefits available to them.” – Freeholder Bill O’Dea
________

“Directors [Ben] Lopez and [Oscar] Aviles have identified available resources within their respective departments to establish a coordinated effort for inmates being discharged to the community,” said County Administrator Abe Antun last week. “Our immediate focus was to establish and set up an initial service before we begin to address more challenges inherent with making this program a success.”
New Jersey historically has reflected the rather poor national trends for prisoners returning to prison, often due to the fact that they lack resources to keep them from returning to a life of crime.
Statistics issued by the state Department of Corrections said that between 1977 and 2002, the New Jersey prison population more than quadrupled. The per capita rate of imprisonment in New Jersey rose from 76 to 331 per 100,000 residents between 1980 and 2002, an increase of over 336 percent.
While the increase is due in part to increased drug offenses, 39 percent return because they violate the conditions of their parole. Most lack educational skills and have a history of drug and alcohol abuse.
The availability of in-prison programs is limited in New Jersey. Statistics show that in 2001, only 17 percent of inmates statewide participated in an educational program, and 6 percent in vocational training. While about two-thirds of all prisoners are released to a period of supervision, most are unprepared for release due to a lack of a job or some form of income.
“Some criminal justice research suggests that finding and maintaining a legitimate job can reduce former prisoners’ chances of re-offending, and the higher the wage, the less likely it is that individuals will return to crime,” one state report showed. “However, most former prisoners experience difficulty finding a job after release. During the time spent in prison, many lose work skills and are given little opportunity to gain useful work experience. Moreover, the availability of job-training programs in prison has declined in recent years.”
Many of the former prisoners have a low level of education and other issues that make them difficult to employ.
“For example, 40 percent of state and federal prisoners have neither a high school diploma nor GED, nearly a third have a physical impairment or mental condition, and over half reportedly used drugs in the month before their arrest,” the state report said. “Once in the community, not only are many employers reluctant to hire convicted felons, but many former prisoners are legally barred from certain occupations.”
O’Dea, who has been instrumental in bringing some of the county’s resources together to help address some of the issues, said details of the county’s plan will be released over the next few weeks.

Meanwhile, the freeholders will be setting up criteria for giving to local charities.
O’Dea noted that the freeholders are being asked to give to more and more local charities without any oversight as to what charity the freeholders are giving money to, and who gets the benefit.
In the past, each freeholder was given a budget amount that could be expended on donations. Most of this, O’Dea said, went to things such as parades.
“But over the last few years, we’ve gotten away from that and we’ve been giving to anyone who asks,” he said. “We’re not being mean, but it is important to know an event we’re donating to actually benefits the public.”
Under the old system, a charity went to its local freeholder, which drew down from a specific amount assigned.
“Once that amount was gone, we couldn’t give any more,” O’Dea said. “While it wasn’t perfect, it was easy to select which were the most important and those that had the most impact on the public.”
O’Dea said he is looking to set up specific criteria that would allow the freeholders to evaluate those charities to which it donates.
Individual freeholders could continue to donate out of their own pockets or campaign war chests, but taxpayer money would go to those charities that provide the most public good.
“Unless we set up criteria, it’s difficult to deny anyone,” he said.