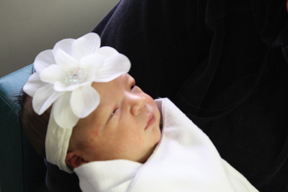 Born one minute after midnight on Jan. 1, Vivian Moreira is the Bayonne Community News’ first baby of the year.
Unfortunately, Vivian had fierce competition for the distinction of being the first baby born in New Jersey. That honor went to a Central New Jersey child born one second after midnight. Vivian, however, was the first child born in Hudson County.
For the second year in a row, Hudson County’s first child was delivered by Dr. Sasha Prakash, who is an obstetrician from Bayonne and the physician at Meadowlands Hospital Medical Center in Secaucus, where Vivian was delivered.
“We did not expect to have the first baby of the year,” said Noel Moreira, the baby’s mother.
Noel and her husband Steve Moreira are lifelong residents of Bayonne. They met and fell in love while still attending Bayonne High School.
Parents already of a 3-year-old son, Richard, the Moreiras thought they knew the routine since both births were the result of a Cesarean – which involves surgery to help deliver the baby.
“With Richard it took about 15 minutes,” Steven said. “But with this birth, there were complications.”
Although Noel was brought into the operating room at about 11 p.m. on Dec. 31, the complications caused a delay so that Vivian was born in 2009.
“We never thought the birth would take an hour,” Noel said.
Vivian came into the world weighing 7 pounds, 1 ounce and was 18 3/4 inches long.
As a result, she becomes the winner of the Bayonne Community News’ First Baby Contest for 2009.
Vivian’s father, Steven, is employed at the Conoco Phillips refinery in Linden. His parents, Edgar and Rosa Moreira, were at the hospital where Noel is recovering during the interview.
Noel teaches fifth grade at School 22, the Earl C. Webb School of Language Arts in Jersey City. Her mother is Maryann DePeppe, wife of the late Richard DePeppe.
Noel said they had no preference for a boy or a girl, although, since they already had a son, she had hoped for a girl.
“But I thought my husband would only give me boys,” she joked.

Their son, Richard, has already come to see his newborn sister, and even got a chance to bottle-feed the infant, as well as to make his opinions known during a local TV interview when he grabbed the microphone.
“I didn’t expect to have a New Year’s baby,” Noel said.
Steven, however, said that because she was born on New Year’s, Vivian will perhaps think that all the celebration that goes with New Year’s Eve’s festivities is because of her.
“We’ll tell her that all those people on TV are celebrating her birthday,” Steven said.
New Year’s babies have become an important icon in culture, serving as a symbol of hope and prosperity. Vivian joins some significant Americans in the distinction of being born on Jan. 1, such as New Jersey Gov. Jon Corzine, 1960s author J.D. Salinger, legendary boxer Rocky Graziano, and American Revolution heroes Paul Revere and Betsy Ross.
Both parents sang the praises of Dr. Sasha Prakash.
“We’re here because of her,” Steven said.

To qualify being named the first baby, the parents must have resided in Bayonne for more than a year. But the baby can be born outside the city.
The couple will receive a variety of prizes pledged by local merchants. These include: