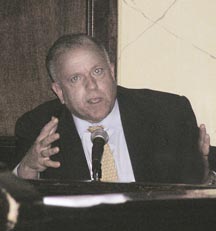 Like rust, politics never sleeps.
So in 2009, expect some significant political clashes – especially in Jersey City, Hoboken, and Secaucus, where mayoral races could alter the local political balance.
Guttenberg also will hold a mayoral election in 2009, although most likely, Gerald Drasheff, who was elected in a special election in November, will carry on for a full four-year term.

The top statewide race in 2009 will be the election for governor in November.
Hoboken’s own Gov. Jon Corzine could face a primary battle in June if fellow Democrats see state budget woes leading to massive political losses to Republicans next November. If Corzine chooses to run for re-election, he might be challenged by fellow Democrats like Rep. Robert E. Andrews (D-1st Dist.) If Corzine declines, state Senate President Dick Codey might even run.
On the Republican side, the gubernatorial hopefuls include former U.S. Attorney Christopher Christie, state Sen. Tom Kean, Jr., and former Bogota Mayor Steve Lonegan.

Predictions for the Hoboken race in May are almost impossible to make, since the political landscape changes daily. But by the end of the year, several trends were evident.
The political fortunes of Councilman Peter Cammarano appear to be fading with his inability to get a quality reform candidate on his ticket and the expected announcement by his ally, Councilman and Assemblyman Ruben Ramos Jr., that he will not run for re-election to the City Council.
Councilman Michael Russo will likely back Councilwoman Beth Mason or developer and school board trustee Frank Raia for mayor rather than run for mayor himself.
Police Captain James Fitzsimmons has been floated as a possible alternative candidate for mayor, replacing the rumored candidacy of Municipal Judge Beverly Glatt. Fitzsimmons served as the council president in the 1990s.
In a change from what she said earlier in 2008, Councilwoman Dawn Zimmer recently said she is considering running for mayor, giving the divided reformer community an alternative choice to Mason.
The big question, of course, will be whether or not incumbent Mayor Dave Roberts will run for his third term. He has gone back and forth on it.

Healy’s the one to beat in Jersey City election

With a significant political war chest to draw on and the advantages of incumbency, Jersey City Mayor Jerramiah Healy poses a huge challenge to anyone seeking to unseat him.
Former Assemblyman Louis Manzo is currently the only declared candidate, although current Assemblyman L. Harvey Smith is expected to announce.
Smith may benefit significantly from recent reports that State Sen. Sandra Cunningham is leaning against a mayoral run. As the leading African-American candidate, Smith could inherit the powerful political breadbasket of Ward F and benefit from the successful get-out-the-vote effort for President Barack Obama.
Although former Mayor Bret Schundler has indicated his interest in running for mayor, he may not be able to get the backing needed to overcome well-funded campaigns by Healy, Manzo, and Smith.
Although a longshot in the mayoral race, community activist Dan Levin is considered one of the good guys of local politics, and could win votes simply on his sterling reputation.
Councilman Steve Fulop already announced he will seek re-election his council seat, but could still be a kingmaker depending upon whose ticket he chooses to join: Manzo’s, Smith’s or Schundler’s.
Council slates are being forged which will likely include a head-to-head battle in Jersey City Heights, where Sean Connors hopes to unseat incumbent Councilman Bill Gaughan.
The recent legal troubles plaguing Councilman Steve Lipski could leave him without a ticket to run on, something of a sad note in an otherwise exciting election.
This year’s council race could also feature the return of civic-minded Jimmy King, as well as former candidate Jimmy Carroll.

The November 2009 election for mayor and council in Secaucus is expected to bring about the long-awaited head-to-head confrontation between Councilman Mike Gonnelli and incumbent Mayor Dennis Elwell.
This is both a political and personal confrontation, and one that has deep roots in a community divided over its future.
Gonnelli’s successful election to the City Council in 2006 set the stage for the upcoming bout, indicating erosion in Elwell’s political power.
Elwell may also face a primary challenge in June if Peter Weiner, the town’s public defender, seeks the Democratic nomination.
Weiner’s effort is seen as a longshot, but could help bloody Elwell’s nose for the main event with Gonnelli, and could leave Gonnelli grateful enough after a November victory to name Weiner as Secaucus’ municipal judge in 2010.

Meanwhile, there will be important elections outside of mayoral races.
Assemblyman and Bayonne Councilman Anthony Chiappone has incurred the wrath of the Bayonne Democrats, and he could face a primary battle in June to keep his spot. Chiappone apparently backed candidates in past elections such as Rob Andrews over candidates supported by the Hudson County Democratic Organization. Who will run against him still is undetermined, but several names have been floated.
Also at risk is L. Harvey Smith’s Assembly seat. If he chooses to run for mayor against Healy in Jersey City, Smith would incur the wrath of the mayor, who is also the Hudson County Democratic Organization chairman. By the end of 2009, Bayonne and southern Jersey City could actually see two new Assembly members.