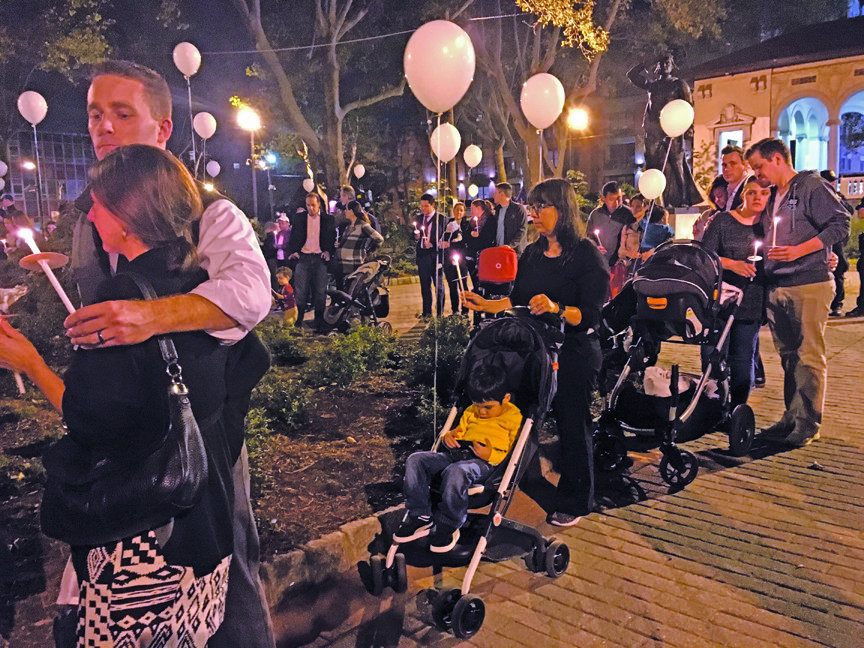 The family of Fabiola De Kroon, the Hoboken mom killed by debris from the Sept. 29 train accident in the Erie Lackawanna terminal, filed a claim against New Jersey Transit on Tuesday.
Filing a claim is the first step toward filing a lawsuit against a public agency in New Jersey. It must be filed within 90 days of the incident. The final day to file would have been Dec. 29.
De Kroon, 34, had dropped her daughter off at day care and headed to the station to go to work in Brooklyn on the morning of Sept. 29. A commuter train on the Pascack Valley line, apparently traveling twice the speed limit at 21 mph, crashed into the platform at the end of the line.
“This is the first step on the road to achieving just compensation for the family of Fabiola Bittar de Kroon, a loving young mother and talented lawyer who tragically and unnecessarily died in the horrific Hoboken crash,” said trial attorney Tom Kline of Kline & Specter.
De Kroon is survived by her husband Adrianus “Daan” De Kroon and their daughter Julia, a toddler. Daan De Kroon and daughter Julia have gone to Fabiola’s native Brazil for a few months.
De Kroon was the only person killed in the crash. More than 100 people were injured.
The claims include assertions that NJT should also be held responsible for requiring only one crew member, the engineer, in the driving cab at the front of the car “[and] failing to properly and adequately screen for, monitor and treat medical issues.”
Train engineer Thomas Gallagher’s attorney has said he suffers from sleep apnea (see last week’s cover story in the Hoboken Reporter about unanswered questions in the crash).
The claim faults the train engineer, Thomas Gallagher, “individuals at NJ Transit involved in the decision not to implement safety technology” including positive train control, “individuals at NJ Transit involved in the design, construction… maintenance of the Hoboken Terminal, including its structures such as its platforms and roofs, the individuals at NJ Transit involved in the decision to require only one crew member, the Engineer, in a driving cab or locomotive during a train’s entry into the Hoboken terminal, and other employees not yet known by the Claimant.”

The claim describes the alleged negligence of NJ Transit and Gallagher.
“Thomas Gallagher acting within the scope of his employment as the NJ Transit Engineer operating train 1614 on the morning of September 29, 2016, accelerated to a speed of at least 21 miles per hour as he entered the Hoboken Terminal, despite the fact that the speed limit at the terminal was 10 miles per hour,” states the claim. “In addition to traveling more than twice the speed limit, Mr. Gallagher failed to stop the train as it approached the platform. Mr. Gallagher and/or NJ Transit failed to properly and adequately screen for, monitor, and treat medical issues. NJ Transit failed to implement PTC or other speed –restricting or safety technology in the area approaching the Hoboken Terminal and in the terminal itself. NJ Transit failed to design, plan, manage, own, operate. Possess, inspect, evaluate, repair, audit, construct, maintain, alter, and/ or control the Hoboken Terminal and premises in a manner so as to eliminate known or obvious dangers to ensure the safety of its passengers, invitees, and/or licensees.”
The claim states, “As a result of the failures of NJ transit and its employees, servants, and agents, including without limitation Mr. Gallagher, train 1614 derailed and crashed causing the terminal to partially collapse and causing catastrophic injuries to more than 100 passengers and the death of on individual Fabiola Bittar de Kroon.”
The family is seeking personal injure damages and “all damages allowed by law,” according to the claim.”
This includes pain and suffering, past and future economic loses, damages and costs of suit, compensatory and other damages under the New Jersey Wrongful Death Act and Survival Act, damages to compensate for the support Claimant’s beneficiaries would have received during the Claimant’s lifetime had she survived to her normal life expectancy, medical funeral and other expenses incurred on behalf of the claimant, and all other “damages and relief cognizable under the law and those damages deemed necessary and equitable by the court and /or jury presiding over the case.”
For more information on the train crash see past stories at hudsonreporter.com.
Marilyn Baer can be reached at marilynb@hudsonreporter.com.