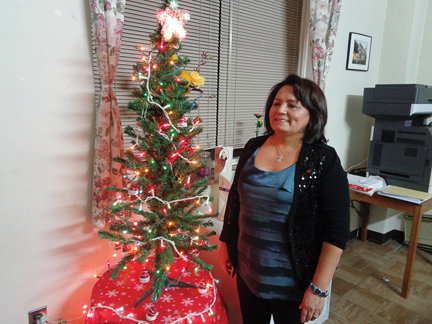 An increase in violence and political unrest in Central America over the last decade has sent many women and children escaping on foot to Mexico, and ultimately, into the United States. Some have come legally, and some have not.
A Union City-based non-profit advocacy group has been working with local immigrants to educate them, help them understand their rights, and help them become citizens.

_____________
“After the election, people were very scared about the outcome.” – Blanca Molina
____________
The group, Comite En Union para Salvadorenos (CEUS), believes their services will be needed more in the months to come, given the country’s rapidly shifting political climate. President-Elect Donald Trump had made anti-immigrant rhetoric part of his campaign when he ran, associating Mexican immigrants with crimes. Last month, he said he will immediately deport two to three million undocumented immigrants who, he said, have criminal records. Local immigrants are concerned that he will target other immigrants.
“After the election, people were very scared about the outcome. But we have been very busy giving our clients information first;” said Blanca Molina, one of CEUS’s founders and its executive director. “We say, ‘We are here to support you.’ ”
As a result, the group has been fundraising and will complete their drive in early January.

The non-profit advocacy group has been providing Hudson County immigrants (mostly documented, some undocumented) with education, leadership training, and affordable legal services since 1993. CEUS programs include ESL and Spanish literacy classes, a women’s empowerment committee, and leadership training workshops.
Molina said she’s seen an increase in clients since Trump got elected.
“We will explain and teach them [clients] what are their rights,” Molina said. “As a human being, they have rights wherever they live. Even if they don’t have their documents, they have rights. So that’s our work now educating them.”
“It’s something very sad for us; very painful,” said a Guatamalen refugee named Elias, a CEUS client who lives in North Bergen, last week. “It’s affecting me psychologically and financially, because you never know what’s going to happen. I’m worried [for my friends], and we talk about it all the time because there’s not much we can do if he goes through [with his positions].”
Elias remembers having to escape his native country on foot in 2005 due to ongoing political conflicts. He walked north to neighboring Mexico, hoping to eventually make the trip to the United States. A friend in New Jersey allowed him to stay with him, and he began taking non-union construction jobs.
But Rene Umana, a documented immigrant from El Salvador, isn’t convinced Trump will keep his word.
“A lot of people are worried about it, because he was saying during the campaign that he’s going to deport people; he’s going to build a wall and everything,” Umana said. “I don’t think that’s going to happen. The reality is, people, they need immigrants. [There is] a lot of work here that the people call ‘immigrant work.’ Nobody else is going to do it.”

In September, CEUS launched its fundraiser for lawyers fighting to protect their clients, largely Central American women and child refugees fleeing that area’s high crime rate. The goal is $16,000, of which over $12,000 has already been raised. However, the aim has largely shifted in response to Trump’s upset.
“It’s not about stopping Trump, because there’s really no stopping him. CEUS needs this money in order to represent these people in court before they do get deported, if that’s ultimately what he wants to do,” said Cristina Pinzon, the founder of Stateside Affairs, a New Jersey-based PR firm that is helping promote the fundraiser.
Not only is the effort needed to retain quality counsel, but also because of the scams often targeting refugees in America, Pinzon said. For instance, notaries from other countries–people authorized to perform certain legal formalities–can offer limited assistance here in immigration cases, but some exaggerate and convince immigrants that they are lawyers.
This leaves refugees vulnerable to their ploys. “They have no legal authorization to help these people in their cases,” Pinzon noted. “[Clients from CEUS] have gone to notaries, paid up at least $300 to 500, sometimes more, and nothing ever happens to their cases. They tell these immigrants who think that [they’re attorneys] that they’re going to be able to help.”
“We are trying to engage other people who are not immigrants or undocumented,” said Molina, who fled El Salvador during its civil war in the 1990s. “Join this campaign to help immigrants–the people who will really need help with four years of this new president.”
To contribute to the fundraiser (which ends in early January), visit http://keepfamiliestogether.causevox.com/. To learn more about CEUS, visit http://www.ceusnj.org/