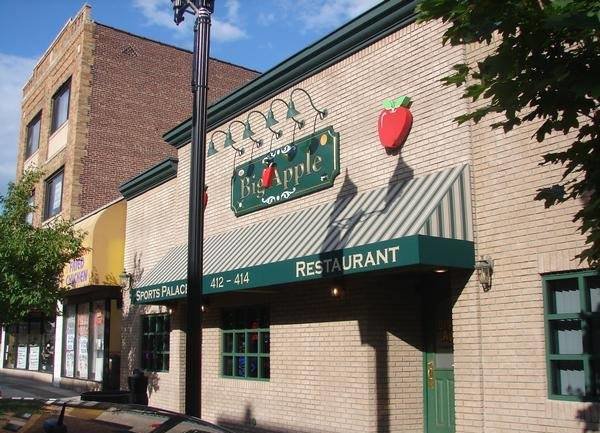 Big Apple has been a mainstay sports bar and restaurant in Bayonne since 1976, when Vinny Bottino’s parents opened it. Bottino has been running the bar since 1987 when he and his brother, John, took over from their parents. John has since moved, and Vinny and his wife, Toni, have been running the show ever since.
Televisions are embedded on walls adorned with sports memorabilia, autographed photos of athletes and actors, and personal memories of the bar, captured in photos over the last 40 years. All that will soon be taken down.
“It’s hard,” said Toni Bottino. “We’ve been going through so many memories in pictures.”
“It’s like Cheers here,” said Vinny. “You get the same people, same times, same seats.” It’s those patrons Vinny will miss most.

The couple said that running a bar and restaurant is a lot of work; it’s not that they’re not up for it, but they have other priorities at this point in their lives.
“The main reason we’re retiring is we have five grandchildren, and we want to spend more time with them,” said Vinny. Toni added, “We’d come right back to work to close after we babysat for 12 hours.”
The Bottinos rarely take time off. “Two weekends a year,” Toni said. She’s looking forward to some R&R and grandparenting duties.
Toni normally opens in the morning with Vinny closing at night.
“The tavern business is not an easy one,” said Vinny. “To be successful, there has to be an owner here.” Owners feel the need to be present at their bars, not only to keep an eye on safety issues, but because customers want that presence. “You could hire the best people in the world to work for you, but people want to see the owners,” he said.

“The main reason we’re retiring is we have five grandchildren, and we want to spend more time with them.” – Vinny Bottino
____________

The Bottinos’ favorite memory is from the New Jersey Devils’ 1995 Stanley Cup victory. Aside from being a Devils bar that threw a great party that night, Vinny and Toni saw the Stanley Cup trophy firsthand, thanks to their late friend, Tommy Shine, who was a PR director for the Devils at the time. “The next morning, we had over a hundred people in the bar for that,” said Vinny. Tommy had itin the back of his car in a blanket.”
“That was really awesome though,” said Toni. “That was an awesome memory.”
One of their daughters is a nurse at NYU Medical center, and their son is a firefighter. “Every one of my children worked here from start to finish,” said Toni. And Vinny’s sister, Gina, has been bartending Sundays for 30 years. “We’ve all had so many great times, great memories in this place,” Toni said
Vinny and Toni said working with charity through their restaurant is also something they’re going to miss. They’ve sponsored Little League with yellow t-shirts emblazoned with “Big Apple” across the front, the Cal Ripken League, soccer, basketball, the PAL, and many others.
The Bottinos have been in Bayonne long enough to watch the city evolve. Vinny remembers when bars would open at 6 a.m. for blue-collar folks working the midnight shift. “They would come out and drink in the morning and go back home as if it were their night,” he said. “It was a thriving bar business in town.” Since then, Vinny has watched as the Best Foods plant shut down, Texaco and Exxon moved out, and a recession hit. Recently, longstanding Bayonne businesses, Victoria TV Sales & Appliances, Chris’ Corner, the Venice, and R&B’z have closed. Through it all, the Bottinos have stayed. “I compare myself to George Bailey from ‘A Wonderful Life,’” said Vinny. “He stayed in his town; I stayed in mine.”
The Bottinos have no plans to leave Bayonne. They will be around town, spending time with family, especially their grandkids. “I’m just going to take a break for a while, get caught up on some stuff,” said Vinny. “We don’t have any plans yet,” said Toni, happily. “We figured it was a good run. It was time.”