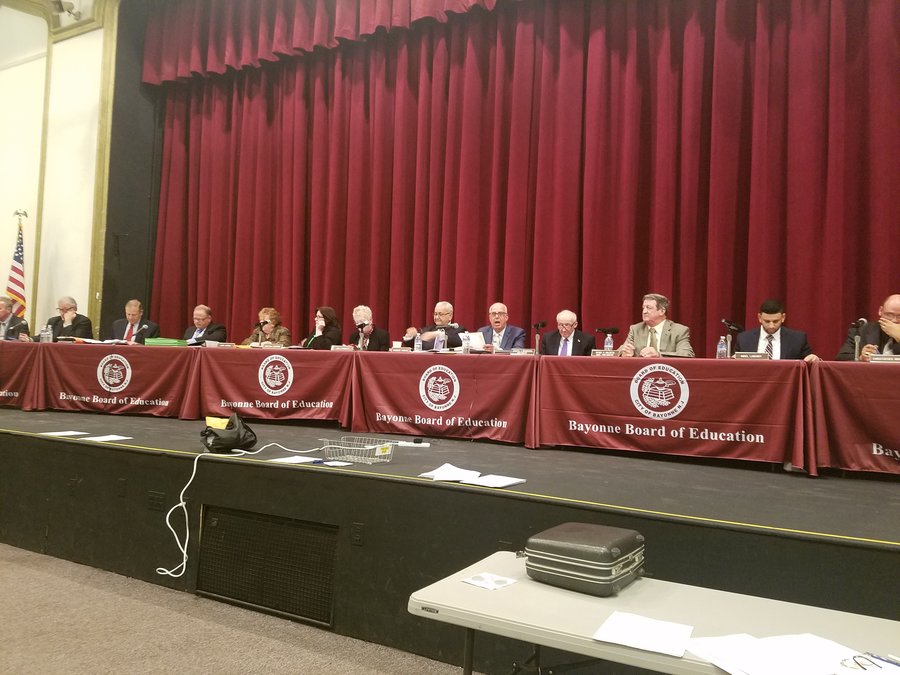 Amid the ongoing controversy over the school board’s $2 million deficit, rumors have been circulating about the premature departure of Bayonne Superintendent of Schools Patricia McGeehan. At press time, Monday, December 19, the rumors could not be confirmed. A Board of Education meeting was scheduled for the evening of December 19. In June, the board voted not to renew her contract.
Meanwhile, the board held an emergency meeting on December 14 during which they voted for a resolution to use money from Regular Operating District (ROD) grant funds to make up the $2 million deficit in last year’s operating budget.
The board voted to take $3.7 million from the district’s capital improvement fund, which uses the state-distributed ROD grant money, and apply it to the $2 million operating deficit, and the remaining $1.4 to the teachers’ contract. “The repurposing of this grant allows us to get to June 30 in good financial shape and take care of business that needs to be taken care of until that point,” said Business Administrator Leo Smith. “
Board President Joseph Broderick called the move a “necessity,” in the face of an “extremely high budget crisis.” The resolution passed 7-2, with Ava Finnerty and Christopher Munoz dissenting.
“The district has got to learn to spend within its means,” said Munoz. “It seems that the only thing the district likes to hold a line on is teachers’ salaries.”
Finnerty said board members were not given sufficient information to know about this deficit when they voted on the budget. “Information was out there, but wasn’t really given to us in a very direct fashion,” she said.

Concerns in the crowd

Teachers and parents were dismayed with the notion of an already under-funded district being squeezed further. Cheryl Jablonsky, a teacher in the district, derided the board’s mistake as a “very expensive band aid.”
“First I’m listening to how underfunded Bayonne is and then seeing how more and more and more money is being spent on added administration, afterschool programs, uniforms for our sporting teams,” said Jablonsky. “Who is paying for all of this, and how expensive can we make our band aids?”
Maria Valado, a local teacher who ran in November’s school board election, expressed concern that arts and music programs will be cut before administrative staff is disciplined. “Will this cutting be of teaching staff in the classrooms where we’ll have an increased number of students in class?” asked Valado. “Or will it be in administrators and attorneys?”
Joe Wyatt, another teacher who addressed the board, said, “If I screw up in the classroom, you can bet they’ll come down on me like a ton of bricks. Stop messing around and hold people accountable.” When asked where exactly money was misspent, the board did not have answers. “The fact that we’re underfunded is irrelevant. It’s an issue, but not what is going on now,” said Wyatt. “So the 800-pound gorilla in here is not the underfunding, it’s the fact that the accounting system doesn’t work.”

With the board proceeding with a plan to plug the deficit with ROD grant money, outraged teachers and parents voiced their desire for those responsible to be disciplined. Local and state politicians seem to be searching for answers, too.
Mayor James Davis and Assemblyman Nicholas Chiaravallotiboth said they will help ensure those responsible for overspending district funds will be held accountable. Chiaravalloti and Assembly Speaker Vincent Prieto requested the Office of the State Auditor to conduct a performance audit. Chiaravalloti said they made the request in order to gain “a complete understanding of how we arrived at this point and what accounts were overextended and what money is gone, and prevent it from occurring again.”

Alan D’Angelo, president of the Bayonne Teachers Association (BTA) was as perturbed as teachers and parents. He criticized the creation of the academies and their afterschool program, though it generates revenue. “The academy is a great asset to the school system,” said D’Angelo. “But you’re expanding these programs when you have a deficit. That’s poor management. He said teachers are “fed up” with the contract situation. “I don’t know how they went this far,” he said.
Trustee Mary Jane Desmond said, “I completely agree with Mr. D’Angelo. It’s not a matter of overpaying, it was underbudgeting.”
“We just need to get it done. I’ve worked 10 years in the district and I haven’t had a contract for eight of them,” said Gene Woods, a history teacher at Bayonne High School. “I need this to get done.”
The urgency of the contract situation had Trustee Ava Finnerty worried. “On the midnight of trying to settle the teachers’ contract, I don’t know how this is going to happen. I really don’t,”she said. “And we’re not going to put it on the backs of the taxpayers. That’s it.”