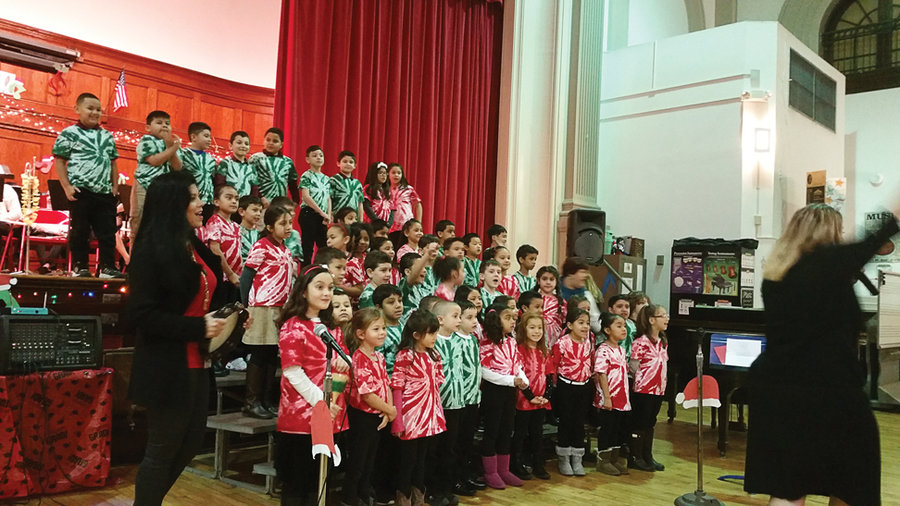 Former Beatle John Lennon may be long gone, but his music was alive for two performances by the Robert Fulton Elementary School Choir on Thursday, Dec. 8 and Friday, Dec. 9. The first performance was on the 36th anniversary of his death.
The first and second grade students sang lyrics including “So this is Christmas/war is over/give peace a chance” to spread peace in the world and their hometown. The school band performed after the choir.
Music teacher Melissa Welz said, “The song means if you want peace you have to spread love.”
Welz also introduced fourth grader Joseph Muniz, 9, who read a poem describing what peace means to him. “Try not to make hearts tear,” he said. “There are a lot of things for you to share.”
After the performance, Muniz said, “I want peace because I want everyone to come together in harmony with no more fights. I want everyone to realize that being kind and respectful is the answer to being a great person.”
Muniz said he wants to be a singer one day and join the choir next year.
The student singers were largely from Angela Sirianni’s second grade class and Keri Graham’s first grade class.
Before the song was over, students held up white doves, a paper peace sign that they made with the help of Spanish teacher Claudia Delrio. The white doves, Delrio said, symbolize peace, and the seven bells on the doves represent peace for all seven continents. The group also made homemade maracas with bottle tops and sent them to countries that need musical instruments.
Welz said they picked the song “Happy Xmas (War is Over)” because it was written by John Lennon and Yoko Ono. “He tried to spread peace, and this is the 36th anniversary of his assassination.”
Sirianni said after the performance, “Every concert of ours has a message. This time it’s that peace is hard to find in some areas on our planet, and our children are the best way to convey this message and touch someone’s heart.”

_____________
“Peace means life, and war is over.” – Shania Grullon
____________
After the performance, teachers asked the students what peace means and some students answered that it means to have schools, houses, and families, love, friends, health, and doctors.
Student Shania Grullon, 8, said, “Peace means life, and war is over.”
“I wish my sister was with me. She’s in Columbia. She was born there,” said student Joyce Mejia, 7.
“I wish my sister was here too,” student Mia Comas, 7, added. “She’s in Florida having fun with grandma.”
Comas said, “My favorite part was saying war is over, and I want peace for everyone in life.”
Student Yara Mohammed, 7, said, “I’ve been to my country once, but I was young. I don’t remember it. I want to go back.”
Parents like Tahani and Mohamad Ibrahim were excited to see their daughter Hanah, 6, perform for the first time. “It’s definitely very cool that they’re promoting peace,” Mohamad said.
Julia Dinham, the mother of Nyah Garcia, 6, said, “I absolutely love the choice of song. It’s appropriate for what’s going in our world at the time.”
“We want to help people like children in Palestine or Nigeria with no water. We wish peace for this whole world,” Sirianni said.
The teachers have created lesson plans to teach the students about problems in other countries.
“We have a big Palestinian community here,” Sirianni said.
Palestinian student Walid Awadaolah, 8, said, “My family is going there [to Palestine].”
Sirianni said, “Walid’s family has been a part of this community since 1992.”
“We love our community, and we love North Bergen,” Sirianni added.
Samantha Meyers can be reached at samantham@hudsonreporter.com .