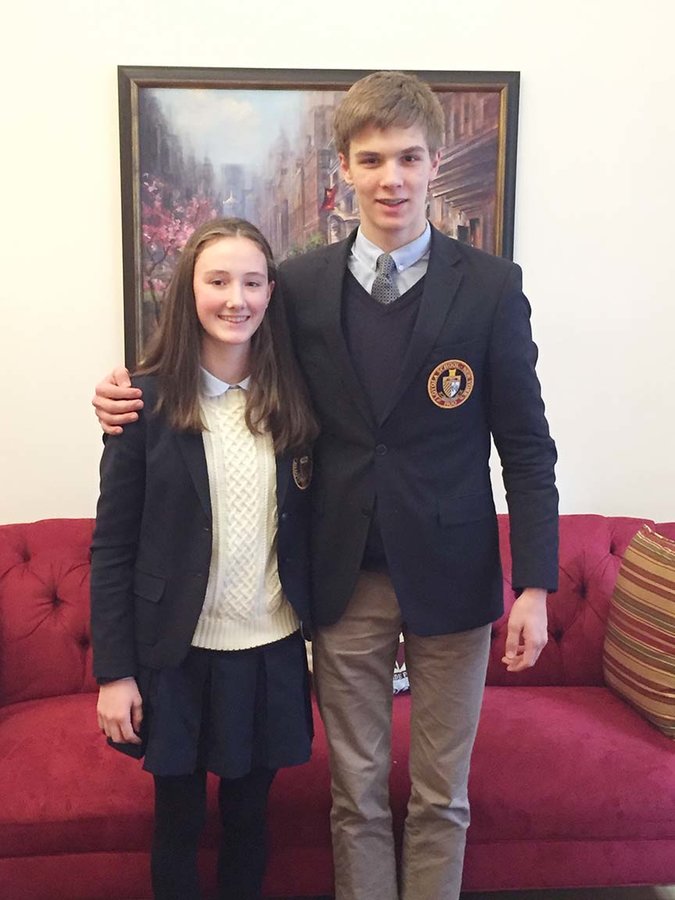 For the last 44 years, Loyola School has been the only co-educational Jesuit college preparatory school in the Tri-State area. Before then, it was strictly all boys, much like St. Peter’s Prep.

Unlike Prep, there are only approximately 200 or so students who attend the Loyola School, making the enrollment more like St. Anthony than St. Peter’s.

It’s a little known gem on the Upper East Side of the world’s largest municipality.

But Loyola School was not lost in the eyes of either Ben Schumann or Hannah Cavanaugh-Gouvea. Both of them are 15 years old and made the decision to attend Loyola School this fall of their own strategic free will.

“It had everything I wanted,” said Cavanaugh-Gouvea, a lifelong Hoboken resident who looked at local Hudson County schools like St. Dominic Academy and High Tech. “The first time I went there, everyone was so welcoming. And I just wanted to go into the city to go to school. It was a major reason in my decision to go.”

Cavanaugh-Gouvea was also an accomplished runner before she stepped foot into Loyola. She first started running in third grade when she was a student at the Hudson School in Hoboken. Her father, Mario Gouvea, was an excellent marathoner during his heyday.

“Running was in my blood,” Hannah admitted. “I guess I had no choice but to become a runner. I played a lot of sports growing up, swimming, soccer, even rugby. Running was always a good experience for me. I stuck with it. It’s all good.”

Schumann’s decision to attend Loyola School was even more calculated.

You see, Schumann lives full-time in Bonn, Germany. Schumann had just completed his freshman year at the famed Aloisiuskolleg, considered to be the most prestigious Jesuit boarding school in Germany, but his dream of becoming an exchange student in the United States and pursue his goal of studying engineering at an American university weighed heavily on Schumann’s mind.

“My family has a strong German-American background and I wanted to experience that culture firsthand,” Schumann said.

Over the summer, Schumann visited the United States with his family and started to look at possible high schools that would accept him as an exchange student.

The family started the search in New York. Needless to say, the search didn’t last long.

“We spent two days in Manhattan,” Schumann said. “I read online about the Loyola School and after I went for a visit and a tour, I fell in love.”

As destiny would have it, the day the Schumann family visited the Loyola School, they bumped into a helpful soul simply named Mr. Sullivan, who recognized the touristy look that the Schumanns had and offered his assistance.

“He mentioned that Regis [High School] had a German club that helped with placing exchange students,” Schumann said “I met a student at Regis, from Union City, and his family was willing to take on an exchange student.”

There it was, two high school students residing just a mile or so apart in Hudson County, making the strategic decision to attend a school in upper Manhattan.

Unlike Cavanaugh-Gouvea, Schumann was not an accomplished runner when he enrolled at Loyola.

“Cross country is not a big thing in Germany,” Schumann said. “At home, my hobby is judo. I have a coach who always told me that running was good for endurance in judo. I read about the Loyola cross country club and I asked the coach to see if I could participate. He gave me a schedule to train and I found out it was fun to train on my own. I was doing 35 miles a week at home, but I had no idea where I was going to start or finish. I spoke to a few people in the U.S. and they told me that cross country was much larger of a sport than I expected it to be.”

In September, Schumann and Cavanaugh-Gouvea both ran with their teammates in the Manhattan College Invitational, one of the biggest cross country meets in America.

“I came in 140th place,” Schumann said. “Coach told me since it was my very first race, he was surprised that I didn’t come in last.”

“Our bigger meets are all at Van Cortlandt Park [in the Bronx],” Cavanaugh-Gouvea said. “I won my very first race there, so I was used to it. I improved some of my times there, because I got used to the two big hills. The last couple of races, I was like third and fourth. I knew that I had to work a little harder.”

Last month, at the New York Catholic Athletic League cross country championships at Van Cortlandt, Schumann and Cavanaugh-Gouvea gave it a go – and they both won their respective races.

That’s right, the two Loyola School newcomers, both of whom currently reside in Hudson County, won the NYCAL championships. You can’t make it up.

“I was quite confident that I wasn’t going to finish last,” Schumann said. “But I’m astonished about my performance. I did what I had to do, practiced every day, running on the bridal path in Central Park, meeting with the trainer. I had a good day and it turned out to be enough to win.”

Schumann apparently kicked past eight runners in the home stretch to claim the gold medal.

Cavanaugh-Gouvea simply outran the field to claim the league crown.

“I was impressed,” Cavanaugh-Gouvea said. “I was very happy about it.”

Cavanaugh-Gouvea’s performance helped the Knights claim the team title for the first time in three years.

“It’s a good experience for me,” Cavanaugh-Gouvea said. “This has given me some confidence moving forward. I know there are a lot of good runners in New York.”

“I never expected that,” said Cavanaugh-Gouvea, who is playing basketball during the winter months. “I think it’s pretty funny that Ben is also from Hudson County. I didn’t know that.”

However, Schumann’s stay with his host family is coming to an end. He will return to Germany at the semester break.

One day, Schumann hopes to return to the United States and attend a four-year school to major in engineering.

“That’s my great dream,” Schumann said. “I definitely want to come back here and study here.”

For now, they are two New York Catholic league cross country champions who reside in Hudson County. They will forever be part of the Loyola School’s legacy and history, champions from Union City and Hoboken. That definitely doesn’t happen every day, a remarkable occurrence, one for the ages and the memory banks and scrapbooks.

Editor’s note: Special thanks to former Main Events boxing public relations manager Donald Tremblay for his assistance in setting up the interviews.