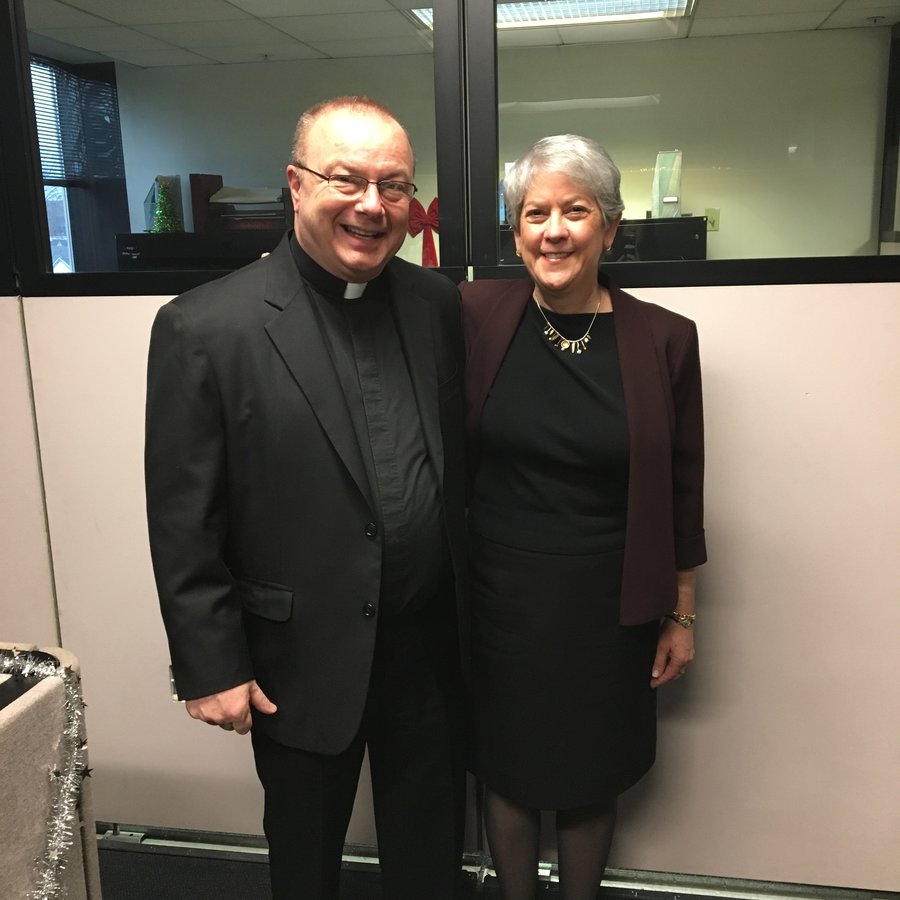 For those familiar with the classic movie “On the Waterfront,” they know the basement of St. Peter & Paul Church in Hoboken was originally a meeting place of people attempting to reform the crime-ridden waterfront. People who wanted to help came to meet there.
Since 2013, in real life, this same basement has become a legal refuge for people who need help in dealing with landlord-tenant conflicts, issues of wills, and other civil legal matters facing working poor, seniors, veterans, and people living with disabilities.
Although the non-profit Waterfront Project relocated its main offices to Jersey City last week and is expanding its staff to provide even more services to people throughout Hudson County, the group says it will remain loyal to its core mission to provide free legal help in civil litigation for those who can’t afford it. Recently, the not-for–profit also expanded its services to include housing counseling.
“Many people don’t realize that a single legal issue – like a debt collection case or an interruption in public benefits – can completely disrupt the lives of low-income people living on the brink of homelessness,” said Rebecca Symes, secretary to Board of Trustees for Waterfront Project. “Having a lawyer can mean all the difference in these cases.”
While the group provides services to every part of the county, the Hoboken location was a little remote for some people to access easily. As part of an expansion of its services, the group recently cut the ribbon on new office facilities near Journal Square, thanks to the generosity of Hudson County Executive Tom DeGise.
“The county provided the office space for free,” she said. “Tom DeGise was kind to us.”
The offices are located at 830 Bergen Ave. in a building that houses the Hudson County Improvement Authority and other county offices.

The Waterfront Project sustains its operating budget through grassroots fundraising, grants from the US Department. of Housing and Urban Development, Hudson County, City of Jersey City, City of Hoboken, and significant annual monetary gifts from The Catholic Community of Saints Peter and Paul, CarePoint Health, Dixon Advisory USA, McManimon Scotland & Baumann LLC, Belkin Burden Wenig & Goldman, LLP, and Winne Banta Basralian & Kahn, P.C. Even towns like Weehawken and Union City are providing something to the program, Symes said.
Jersey City Council President Rolando Lavarro said Jersey City is dedicating some of its Community Development Block Grants to the program.
Freeholder Anthony Romano said the freeholder board voted to support DeGise’s offer in providing space.
“This helps the neediest in our county, and provides legal aid to those who might not otherwise be able to get it,” he said.
Dinah Hendon, Esq., who has served as executive director since October, said this brings her back to the land of her mother’s birth, West New York.
“I started my legal career here in Hudson County over thirty years ago as an assistant prosecutor and supervisor of the child abuse and sexual assault unit,” she said.
She is currently a board trustee of Prevent Child Abuse – New Jersey, as well as a member of the New Jersey Supreme Court Special Civil Part Committee.
In addition to the appointment of Ms. Hendon, the board has expanded the staff to meet the needs of The Waterfront Project’s new and ever-increasing caseload. Janet Aponte is the full-time housing counselor with over 20 years’ experience and Ellen Jo Gold, formerly an attorney with Northeast New Jersey Legal Services, is the new part-time staff attorney.
Both she and Hendon speak Spanish fluently.
“We are very excited to have someone at the helm with such a high level of commitment to public service and, in particular, to the mission of The Waterfront Project,” said Board President Isabel Chou. “The board is looking forward to working with Dinah in advancing the important work we are doing in Hudson County.”
More than 50 officials from around Hudson County attended the ribbon cutting on Dec. 6.
Included in the ceremony were DeGise and Jersey City Mayor Steven Fulop, who presided over the ribbon cutting ceremony.
Attending the event were HUD NJ Field Office Director Maria Maio-Messano, Assemblywoman Angela McKnight, Assemblyman Nicholas Chiaravalloti, Hudson County Freeholder Anthony Romano, JC Council President Rolando Lavarro, JC Councilwoman-at-Large Joyce Watterman, and JC Deputy Mayor Vivian Brady-Phillips.
Offices are open Tuesday, Wednesday and Thursday. You can reach them by phone at (551)256-7578 or by mail at: The Waterfront Project, Inc.; 830 Bergen Avenue, Suite 4A; Jersey City, NJ 07306
Al Sullivan may be reached at asullivan@hudsonreporter.com.