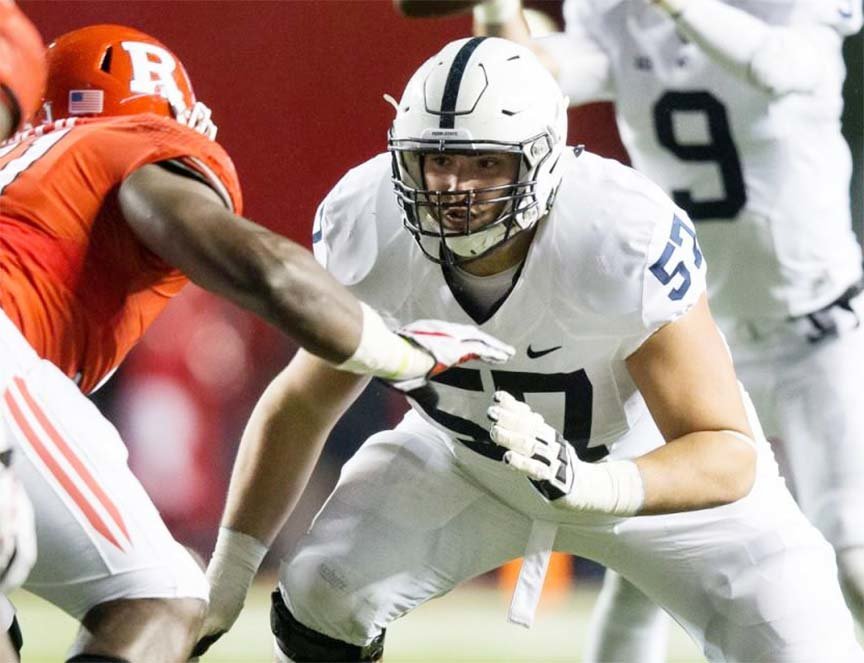 But Limegrover was going to hit Gonzalez with some great news. Gonzalez was being promoted into the Nittany Lions’ starting lineup at right guard.

And the timing couldn’t have been any better, as Gonzalez was set to make his first start in Piscataway against Rutgers.

“Coach [James] Franklin texted me to see if I was alright and that I should be watching film of Rutgers,” said Gonzalez, who only graduated from Union City High School two years ago. “He just wanted to make sure that I was prepared. Here it was, my first career start, and it happens near my hometown. It meant the world to me to get the chance. I was a little nervous and anxious, but once it got underway, that was gone.”

Gonzalez was a little thrown by the timing and the location.

“It was a little nerve wracking,” Gonzalez said. “I was playing in front of all my family and friends. But I got settled in and knew this was my opportunity.”

Gonzalez played well in his debut. So much so that he got a second chance against Michigan State and then again last week, when the Nittany Lions faced Wisconsin for the Big 10 championship and a berth to the Rose Bowl in Pasadena Jan. 2.

Sure enough, the Nittany Lions won the showdown with the Badgers, 38-31, to punch their ticket to sunny southern California for the New Year.

“After the first two games, it wasn’t as bad as I thought it might be,” Gonzalez said. “I felt prepared. Words can’t explain how I feel right now. We kept our heads high even after falling behind, 28-14. We knew we were going to win.”

Gonzalez was asked if he thought the Nittany Lions had a chance to sneak into the top four of the college football rankings and earn a berth in the national semifinals.

Yes, the kid from Union City gets to play in the granddaddy of all college bowl games in just his second year of college football. That says a lot about his dedication and desire to learn and listen.

“Honestly, I’ve thought about that and I still can’t believe it,” Gonzalez said in a phone interview. “If someone would have told me that I would be in the position I’m in now, I’d have said, ‘No.’ But God had a plan for me and gave me the opportunity to play. Now I’m running away with it. A small kid from Union City going to the Rose Bowl. It’s a crazy accomplishment.”

Incredibly, Gonzalez is not the first kid from Union City to play the Rose Bowl. Two years ago, former Soaring Eagles standout lineman Josue Matias started at tackle for Florida State in the national championship game played in the Rose Bowl.

“It’s awesome,” Gonzalez said. “We were tweeting together right after we got the Rose Bowl bid. He told me about the experience of being in the Rose Bowl and said that there was nothing like it.”

Matias left Penn State and signed as a free agent with the Tennessee Titans, but was released this year.

Needless to say, both are credits to the Union City football program and the entire community.

Gonzalez is spending the week after the Big 10 championship taking finals.

“Most of this week and next week are finals,” Gonzalez said. “We’re taking off from practice this week and maybe watch a little film on USC. Since we’re going to the Rose Bowl, we need to give our bodies a little rest before hand and go from there.”

When the dust cleared and the congratulations were passed about the Penn State locker room, Steven Gonzalez thought of one person – his late father, Jorge, who died of a heart attack in September of 2013, right before the Soaring Eagles were set to play.

“He would be ecstatic right now, scrambling around to get a plane ticket so he could stay out there for the game,” Gonzalez said. “He was so supportive of me, going from the scout team to starting is just amazing. He would be very proud, for sure.”

After the win over Wisconsin, Gonzalez got down on the field at Lucas Oil Stadium in Indianapolis to all fours and was giving praise to everyone, including his father. It was a touching scene, one for the memory books.

For now, Gonzalez is headed to California to make more history in a season of historical moments…

The Great Hagueini misfired on his last selection of the high school football season, as St. Peter’s Prep came up a little short against Paramus Catholic, 33-28, last Friday night at MetLife Stadium, so Hagueini ended the 2016 season with a 9-4 record.

The Marauders played well at times and even had a 14-7 halftime lead. But they didn’t capitalize on the chances they had and Paramus Catholic then exploded past the Prep with an incredible display of team speed not seen in a long time.

So all in all, it was a good football season locally. It will be capped off next week with the 2016 Hudson Reporter All-Area High School Football Team, the 25th anniversary of the first Reporter All-Area grid team.

So make sure you get out and secure a copy of the Hudson Reporter newspapers next week for the All-Area team. – Jim Hague