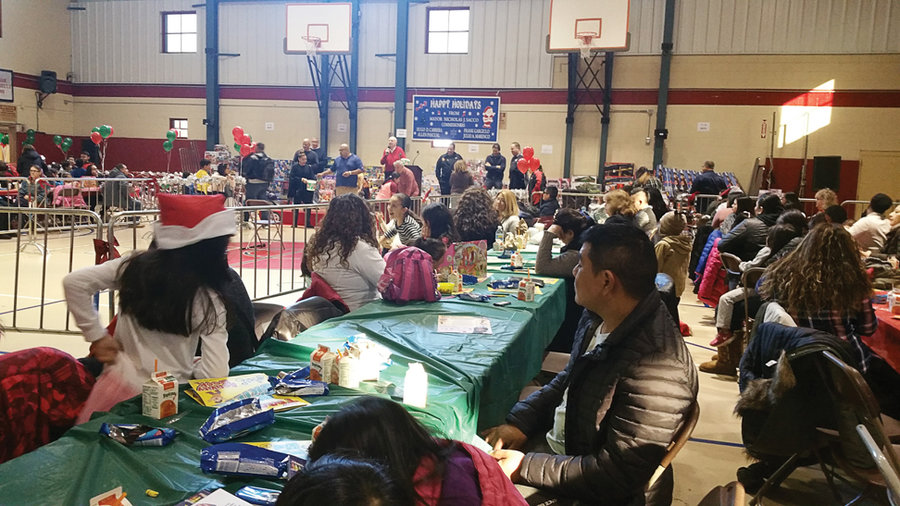 Entrants must send at least three but no more than six photos of your home. One photo must be the full home; the others can be decoration detail photos. Email the photos to jctalking2000@yahoo.com or tweet to JCHudsonMedia.

Car goes up in flames on Route 3 Thursday morning

First arriving units found part of a car engulfed in flames and an injured man lying on the grass median that separates RT-3 West and the RT-3 West Service Road.

Sheriff’s Crash Investigators have determined that the driver lost control of his vehicle at the RT-1&9/RT-3 merge. According to the report, the car jumped a curb to the grass median that separates RT-3 East and West, crashed into two telephone poles, knocking one down, and then the car disintegrated.

The driver was ejected from the wreck of the car, rolled across RT-3, and eventually ended up on the median, the report states.

What remained of the car burst into flames and came to rest near the Paterson Plank Road overpass on RT-3 West, the report states. The driver was transported by EMS to Hackensack University Trauma Center with serious injuries. He remains hospitalized pending surgery to his left arm.

Hudson County Crash Investigators believe that high speed was a factor in the crash.

The section of RT-3 West was closed for four hours while crash investigators worked the scene.  Investigators have not yet determined if any other vehicles were involved in the crash.

No charges have been filed at this time and crash remains under investigation.

If anyone witnessed this crash, please contact the Hudson County Sheriff’s Office Crash Investigation Unit at 201-915-1300.

The developer for the massive American Dream retail/entertainment complex on Route 3, Triple Five Worldwide, released video this week of a new design plan. To replace the different colors of the exterior, the new design concept is to include a glass and silver exterior.

The building project is scheduled to be completed in fall 2018, according to Tripe Five Worldwide.

American Dream has recruited other businesses and entertainment options such as Lego Land, an aquarium, and a 4D dine-in movie theater.

Watch the video for the new design concept at https://www.youtube.com/watch?v=CVwxucZzl_M&feature=youtu.be

The Fellowship Program is a six-week program in which students of South Asian descent ranging from middle school through college will be placed in a full time internship with their local mayor’s office, state legislator, or the governor’s office. In addition to the internship, fellows also take part in a leadership component which includes a weekly speakership series, networking events, career development workshops, and field trips.

Applications for the fellowship program are currently being accepted on a rolling basis through Feb. 17, 2017. Interested candidates can apply at www.njlead.org. More information about the NJLP Summer Fellowship Program can be found at www.njlead.org.

The NJLP held its first fellowship program this past summer, hosting ten fellows who ranged in age and were based throughout the state. Internship placements included the Office of Community Relations within Gov. Chris Christie’s office, several state senators and assembly people, as well as the office of South River Councilman Ryan Jones.

Annual Holiday Celebration at the library

The North Bergen Free Public Library will host its Annual Holiday Celebration at the Main Library on Friday, Dec. 16 at 4:30 p.m. There will be a Santa meet & greet, holiday crafts, and more. The Main Library is located at 8411 Bergenline Ave. For more information please call (201) 869-4715 or visit www.nbpl.org.

The Kennedy Branch will be hosting its 4th Annual Holiday Celebration on Thursday, Dec. 15 at 4:30 p.m., featuring Santa and a life-size snow globe that you can climb inside and take pictures. The Kennedy Branch is located at 2123 Kennedy Boulevard. For more information please call (201) 869-4715 Ext 6.

North Bergen resident Christina Potter and her Berger Picard, Chester, have been invited to compete in the American Kennel Club Agility Invitational, held in Orlando, Florida from Friday Dec. 16 to Sunday, Dec. 18.

At the Invitational, one of the top events in the country for agility dogs, Christina and Chester  will go through an obstacle course that includes tunnels, weave poles, jumps and seesaws, all while racing against the clock and striving for a perfect score of 100. Any missed obstacles or other mistakes result in penalty faults which are deducted from the score.

After the completion of four rounds over two days, the top dogs in each jump height will move to the finals. The finals are open only to the top 58 dogs overall through the four rounds of competition.

Only the top-five ranked agility dogs in each of the 190 AKC recognized breeds, as well as the top five All-American dogs, are invited to attend this prestigious event.

Christina Potter is the author of “Chester Gigolo: Diary of a Dog Star,” and “Insider Training: Chester Gigolo’s Dog Training Secrets Revealed,” both available on Amazon.

The Kennedy Dancers, Inc. have announced auditions for the Inner City Youth Pre-Professional Program, also known as ICY. The ICY full and partial scholarships are available to students ages 15 to 18, who have had at least two years of dance training.

This program provides advance training that gives talented teens the opportunity to learn many forms of dance. All participants are assisted in applying to college or university dance programs, with auditions, and assist in applying for internships, teaching, and opportunities to perform professionally.

Teens who have training in ballet, modern, or jazz will have an advantage at the auditions. Dancers must wear professional clothing (tights, leotards, ballet slippers, and jazz shoes). There is no income limit for applicants. Whether your family has low, moderate or high income, all teens 14 to 18 are eligible for the scholarship.

The Kennedy Dancers is a non-profit Jersey City based professional American dance company.

According to an article from NJ.com, the borough of Bogota’s planning board approved a $100 million development on the Hackensack River Tuesday, Dec. 6. The project will soon begin construction after this approval. The plan still needs to be approved by the mayor and council, but officials stated in the report that it could be approved by the full council by the end of the year.

The property was formerly owned by Hess and will now hold a 421-unit luxury development called The River Club, the article states. The 14-acre site will have a river walk along the Hackensack River, outdoor plazas, and commercial space.

The owner of the site River Development LLC had to remove 17 oil tanks left behind by Hess Corp, the report states.

According to the report construction could begin in early 2017. The report states that Bogota officials said the project will bring in approximately $60 million over 30-years.

The report states that the site will contain a parking lot with 800 spaces, retail spaces, and more than 40 units set aside for affordable housing.