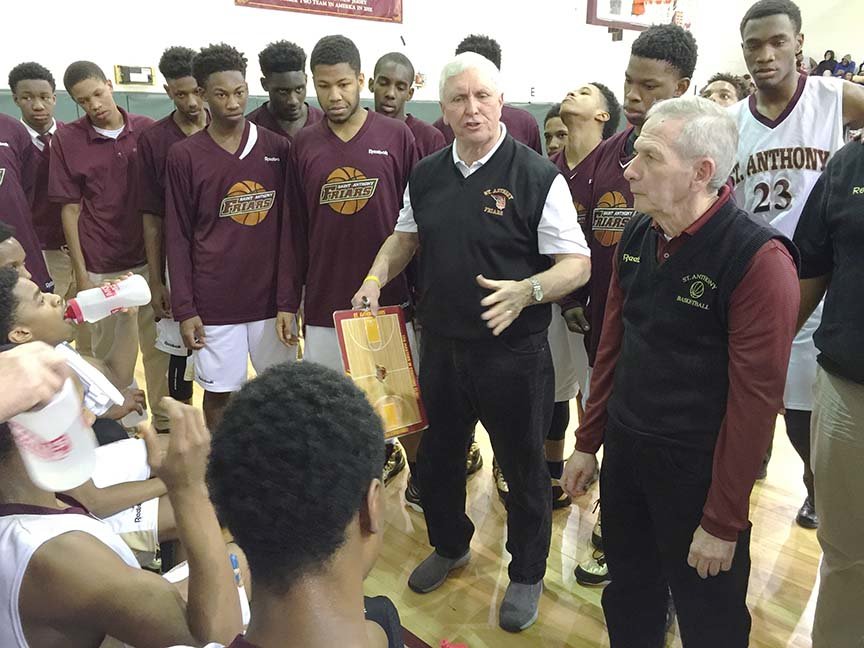 It was another season to remember in a lifetime of memorable seasons at St. Anthony.

Last year, the fabulous Friars posted yet another undefeated season, winning all 32 of their games, including the NJSIAA Tournament of Champions crown.

The Friars won the T of C title for a record 13th time and the first time since 2012. No other school in New Jersey has captured the T of C crown more than five times. The next nearest competitor, St. Patrick’s of Elizabeth, has five.

It was the ninth time that the Friars ended a season without a single loss, the first time going back to the last T of C winner in 2012, when the Friars capped a two-year streak without a loss and two straight T of C crowns.

But last year’s brilliant season has been locked away and tucked safely in the already burgeoning trophy case like the other Friar champions in the past, now 28 state champions in all _ already a state record.

In fact, most of last year’s team has graduated and moved on to their respective college basketball teams. Some like Jagan Mosely are playing at the major Division I level (Georgetown). Others like Juvaris Hayes are at the NCAA Division II level (Merrimack), where Hayes has already earned Rookie of the Week and Player of the Week in the Northeast 10 Conference, the first player to earn both honors in the same week in six years.

Hurley makes no bones about how much he’s going to depend upon Cole this year.

“The rest of the kids can relax around him,” Hurley said. “R.J. could very well be the best guard in the state. He’s really good offensively. He knows he’s going to have to have one of those seasons where he has to do a lot of things for us. He’s going to have to stay aggressive all year. I usually say that sharing is caring, but not as much this year.”

Hurley hinted that Cole would have to score as much as 20 points per game — or more — for the Friars to be competitive.

“I think he’s embraced that role,” Hurley said of Cole, who has already signed his national letter of intent to attend Howard University next fall. “We will go into games with a puncher’s chance knowing that R.J. is going to be there. Our goal is to find four players who can play high school basketball. But let’s be clear. To keep ourselves in games, we need R.J. Cole to perform.”

So that makes R.J. the King, as in King Cole. We can’t call him Old King Cole because he’s not old. And he might be able to sing, but he’s no Nat King Cole. So he’s just King Cole with the Friars. And that’s fine with Hurley.

“Everyone wants to have a veteran talented team,” Hurley said. “But with that comes the pressure to perform. We don’t have that right now. But we could become a dangerous team. We could be a good team by the end of the season. We’re trying to develop a championship ways and lifestyles. It’s basically R.J. and a couple of other guys who have been around long enough to know better.”

Cole is still playing the point guard while being asked to score, sort of like Tim Hardaway was in his heyday with the Golden State Warriors. We could be aging ourselves with that last line.

Sophomore Alexander Rice is the team’s other starting guard. The 6-foot-1 Rice is the son of Monmouth University head coach King Rice, a standout guard in his collegiate days at North Carolina.

“He’s a coach’s son, so he’s advanced for a sophomore,” Hurley said. “He has great knowledge of the game. His jump shot is terrific. He handles the ball terrifically. If he makes a play, then he always has to know where R.J. is.”

“He can make shots,” Hurley said. “He’s more of a swingman, going from guard to small forward. He can make long shots as well. He has good fundamental skills.”

Nigel Marshall is a 6-foot-4 junior forward who will get considerable playing time. He’s a transfer from 13th Street Tech in Newark, but can play right away.

“He’s a physical specimen,” Hurley said. “He looks like he could be a college football player. He has to be a physical presence inside.”

Junior Ogheneyole Akuwova, who is better known as Precious, is a 6-foot-9 raw talent who will get better with playing time. Oscar Okeke is a 6-foot-11 senior who is coming off ACL surgery and is rehabbing that injury, so he’s unable to play at the start of the season.

“If we wait it out a little, Oscar will be on the court playing soon,” said Hurley, who sent Okeke to Strulowitz and Gargiulo Physical Therapy in the Jersey City Heights to get treatment. S&G, headed by Carl Gargiulo, helped to treat Bobby Hurley after his near-fatal car accident in 1993.

Bakari Simmons is a 6-foot-4 junior transfer from Illinois who also has strong basketball roots. His father is Bobby Simmons, the former DePaul standout who played in the NBA with the Nets and Milwaukee Bucks, among others.

“Bakari is more of an outside player,” Hurley said.

Junior Ethiel Horton is a 6-foot-2 guard who is a transfer from Union High School, so Horton will have to sit the mandatory 30 days due to the NJSIAA’s transfer rule.

As you can see, the Friars are heavily packed with juniors, with only King Cole and Okeke as seniors.

“Last year, I was coaching a team that was trying not to lose,” Hurley said. “I now have a team that’s trying to get through practice. It’s R.J. and a few guys named Louie.”

The Friars open Friday, Dec. 16 with a game against Prestige Prep. They then take on St. Joseph of Montvale in the annual Hoop Group Tip-Off Showcase Tournament at Caldwell University on Sunday, Dec. 18 at 3:45 p.m.

“Our real test will come when we play 12 straight games on the road,” Hurley said. “Middle of January into February, we play 12 on the road against good teams. We’re just not home.”

Hurley knows that no one is about to feel sorry for him and the Friars.

“What doesn’t kill you will only make you stronger,” Hurley said. “We’ll use the depth we have and attempt to be clever. I have faith in R.J.”

And everyone else in local basketball circles has faith in Hurley. No matter how much the coach complains, they win and win some more, some 1,150 times over 44 years as head coach. Count on more of the same this year.