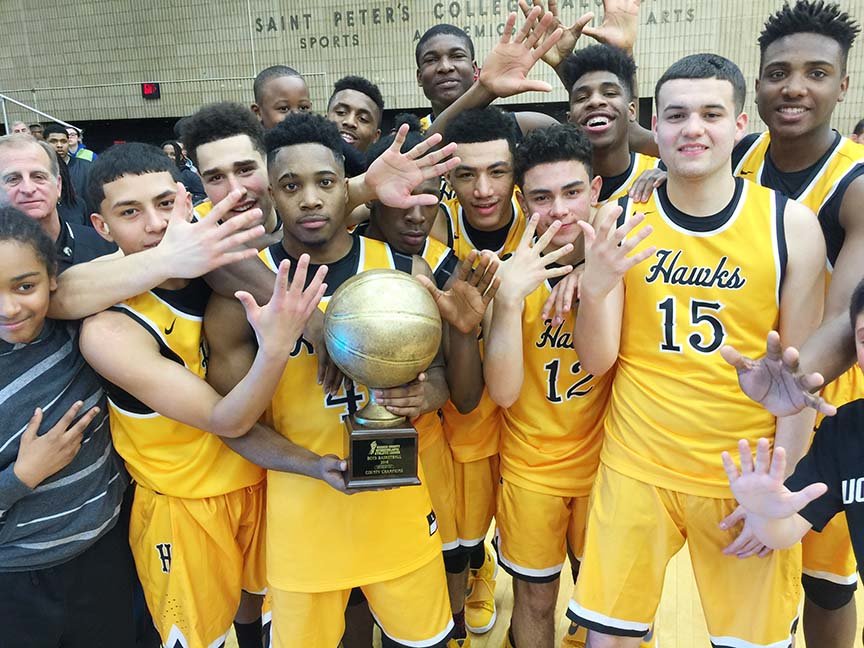 That idea itself was almost too much to even fathom. Hudson Catholic had gone 37 years without winning a single county crown and now the school has won five straight.

Maybe Marist in its heyday in the 90s won as many.

But one would have to search far and wide in county annals to find a team that won more. Winning a fifth straight county crown was a crowning achievement for the Hawks and head coach Nick Mariniello.

However, the Hawks didn’t have enough time to recover after the county championship glee. Suffering from a huge basketball hangover, the Hawks, just two days later, lost their first round game in the NJSIAA Non-Public A North state playoffs to St. Joseph of Montvale, 87-81.

“It was our first home loss in seven years,” Mariniello said. “I mean, seven years. Losing to St. Joe’s was the worst thing. We didn’t take them seriously. We got clipped at the wrong time. It was a very humbling experience. My players had to realize that they can’t just turn it on and off and expect to win. They have to realize it doesn’t work that way.”

Mariniello has played that loss over and over in his head since it happened last March.

“We did a poor job defensively,” Mariniello said. “We take pride in our defense. We allowed 87 points. No doubt, that loss has stuck in my throat since that night. Every year, our goal is to win a state championship and we fell short.”

The Hawks have a deep and talented team, perhaps the most talented team they’ve ever put on the floor, even throughout the “five-peat.”

“I know my team,” Mariniello said. “We know we’re talented. But talent doesn’t win games. This team has to be motivated by that loss. I know I am. In the big picture, we have to turn that loss into a positive thing.”

And as practices began in earnest for the coming season last week, Mariniello sensed a difference in his team.

“I think I have their attention,” Mariniello said. “I can see it in their faces. I’m trying to get them to understand the sense of urgency we need.”

Three of Mariniello’s players spent the summer traveling the country, gaining attention at every stop, playing on national television, performing under the spotlights in big arenas.

“But that doesn’t matter to me,” Mariniello said. “I don’t get caught up in all that. Everyone has an opinion about our players, but they’re not telling anything I don’t already know. I know my team.”

The Hawks have only one prominent senior, but he’s an important one in 6-foot point guard Tyheem Burno.

“He’s worked hard over the summer to turn himself into a good shooter,” Mariniello said. “He’s the best on-ball defender in the state. He raises the level of our defense.”

Burno, the nephew of former St. Anthony and DePaul standout Rashon Burno, who is currently an assistant to Bobby Hurley at Arizona State, is getting some looks from schools in the Metro Atlantic Athletic Conference.

But if his shooting range has indeed improved, then Burno stands to get even better offers.

The Hawks’ junior class may be the best in the school’s history. If anything, the team is stocked with talented juniors who will definitely play major college basketball in two seasons.

Leading the way is 6-foot-2 junior Jahvon Quinerly, who may just turn out to be the best all-around player Hudson Catholic has ever produced. And that includes Mike O’Koren and Jim Spanarkel, both of whom played in the NBA.

That line is going to anger some old-time hoop wizards (including perhaps O’Koren and Spanarkel themselves). But it’s true. On talent alone, Quinerly stands ahead of the class. He has a devastating jump shot, one that has no peers. He can handle the ball well.

“I think he has a high basketball IQ,” Mariniello said. “He plays changing speed and direction all the time. He also doesn’t get rattled. He’s the same all the time, very poised and quiet.”

And deadly as a scorer.

Luther Muhammad is a 6-foot-4 junior guard/small forward. Muhammad is also extremely talented, evidenced by his performance in the county final against St. Peter’s Prep, when he exploded for 30 points. He also had 26 in the loss to St. Joseph’s.

“He’s a hard worker,” Mariniello said. “He is tenacious on both ends of the floor. He also has tremendous energy. He has improved his skill set and it’s good that he can play multiple positions.”

The third big-time junior is 6-foot-8 Louis King, who transferred to Hudson Catholic from Pope John of Sparta and sat out all last season. Like Quinerly and Muhammad, King is considered a top 50 recruit when the time comes for him to sign a letter.

“I can’t judge him because he hasn’t even practiced with us yet,” Mariniello said. “He’s done everything we asked him to do. He has the opportunity to do some special things.”

“His role will increase this year,” Mariniello promises.

“He can rebound the ball,” Mariniello said. “He’s very athletic and provides defensive pressure in the middle.”

Will Brown is a 6-foot-4 junior forward.

“He came to us, never having played the game before,” Mariniello said. “First time he came to school, he came on a skateboard. He’s a self-made player who transformed him into a small forward.”

Shaquille Dezonie is a 6-foot-5 junior who is being taught how to play small forward.

So the Hawks tip off their season in two weeks at the City of Palms Classic in Fort Myers, Florida. If they win their first game, they could be paired with the Patrick School.

The Hawks will also participate in the Al LoBalbo Tournament at St. Mary’s in Elizabeth, where the Hawks face Morristown-Beard in the first round.

“We have a good, competitive independent schedule,” Mariniello said.

Of course, there’s the quest to make it six straight county titles, a feat that no one thought was possible. It was amazing when St. Peter’s Prep rolled off four straight a few years ago. But six? It’s too unbelievable for words.

So the Hawks begin the new season thinking about the end of the prior season.

“We’re holding on to it,” Mariniello said. “We didn’t do what we were supposed to do and it was over. It’s a major reference point for us.”

Jim Hague can be reached via e-mail at OGSMAR@aol.com. You can also read Jim’s blog at www.jimhaguesports.blogspot.com.