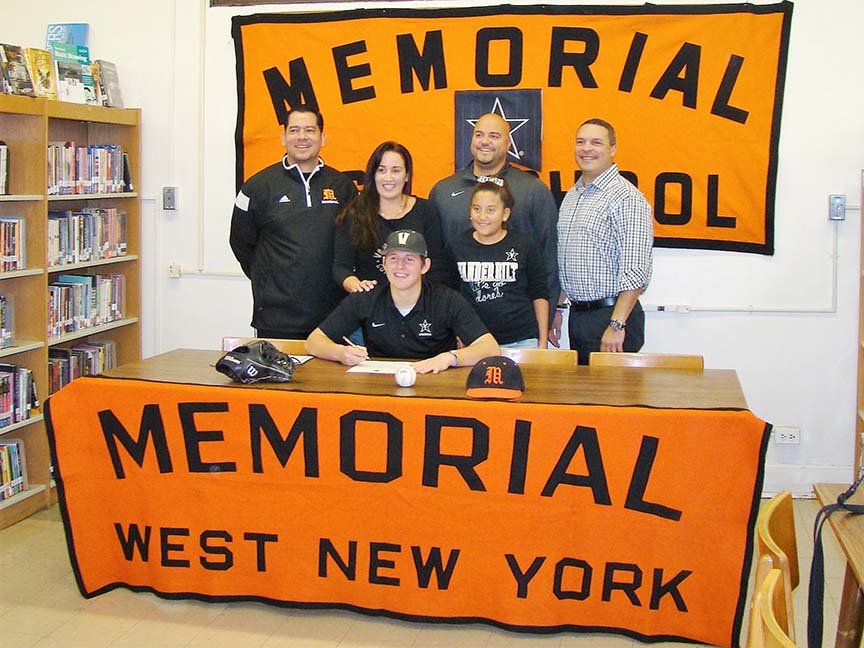 Justin Willis knew about a year ago where he was going to go to college. The Memorial senior right-handed pitcher, coveted by a ton of NCAA Division I schools, had it in his mind that he was headed to Nashville and going to pitch at Vanderbilt University.

So last week’s national letter of intent signing at the school was nothing more than a formality.

“It was just about the combination of athletics and academics,” said the talented hurler, who won only three games in a strange first year with Memorial after transferring back home from St. Joseph of Metuchen. “Vanderbilt is doing some great things. The school is on the rise. Each time I’ve been there, I’ve realized that Nashville is a great city. It reminds me a lot of Hoboken.”

“Price made a huge donation to the school,” Willis said. “He said that Vanderbilt helped him become the player and person that he is. I haven’t met him yet, but I hope to interact with him someday. He always comes back to the school.”

Willis said that he was convinced about Vanderbilt and wasn’t swayed by another school before he put his signature to the NLI recently.

“I know that there are a lot more guys de-committing from their initial word,” Willis said. “I never had the reason to do so. Now that I’ve signed, it definitely gives me some comfort that the recruiting process is over. It’s more reassuring.”

Willis knows that he entered the Hudson County baseball scene with a sense of excitement, especially after his brilliant sophomore year at St. Joseph, where he posted a 9-1 record and earned All-State honors.

“It was definitely a little bit of a burden,” Willis said. “I needed to have a little chip on my shoulder.”

But things didn’t exactly go as expected with his new team. The Tigers had such huge expectations of greatness last spring, but they never materialized.

“I thought we only needed a little to get over the hump, after being in the county championship game the year before,” Willis said. “I guess we took our foot off the gas pedal and people caught us. I know I was definitely not where I was my sophomore year. It wasn’t the result we all thought we’d have. I definitely want to prove that last year was a fluke. I hope I can go seven innings every game.”

The Soaring Eagles, based on their great defensive effort all around, held a 14-10 lead in the closing seconds of the game. They had a chance to put the game away with just four minutes left, but couldn’t score the game-sealing touchdown, turning the ball back over to Passaic Tech with just over four minutes to play on their own 2-yard line.

“We were in good shape,” Valdez said. “They had to go 98 yards in four minutes without their quarterback.”

The Bulldogs’ heralded quarterback Derrick Cuavers went out with a leg injury, after being shut down most of the night by the Soaring Eagles’ swarming defense.

The backup quarterback Zaire Weaver came in and started completing little dink passes all over the place.

“My hat’s off to them,” Valdez said. “You can’t disrespect their kids for making big plays. They made plays when they had to and we didn’t.”

The Bulldogs moved the ball down _ sometimes questionably _ to the Soaring Eagles’ 1-yard line with just six seconds left.

“Right before, we got the ball on a strip sack and no call,” Valdez said. “We had another sack and another no call.”

The Bulldogs brought the injured Cuavers to come back in for the game’s final play. He jumped high and was hit hard before he reached the goal line, causing the ball to pop out. Reviewing the play on tape, it appears from every angle to have been a fumble.

“Harrison [Fernandez, the Soaring Eagles’ standout safety] came out of the pile with the ball,” Valdez said. “The referees gathered together for a minute or so, then called it a touchdown.”

One official said that a Passaic Tech lineman recovered the fumble in the end zone. Another told Valdez that Cuavers scored the touchdown without fumbling. That was the official ruling.

“We need to get more qualified referees for the state playoffs,” Valdez said. “To have the game in the hands of people who don’t care if they got the call right or wrong. It’s a hard pill to swallow. We were going up against a team that beat us by four touchdowns [40-13 on Sept. 23] and we were one play away. They believed they could win. I’m so proud of these seniors. Not many programs can say they’ve been to the playoffs seven years straight.

Added Valdez, “It’s a tough pill to swallow. Our day is coming. I have to stay optimistic.”

It really is one of the most bizarre endings to a football game ever. To have it happen in a state sectional semifinal just makes it worse…

Former St. Anthony basketball standout Juvaris Hayes has started his collegiate career in golden fashion. Hayes, part of the fabulous Friars’ run to the NJSIAA Tournament of Champions title last March, became the first player in six years to earn Northeast-10 Conference Player of the Week and Rookie of the Week in the same week.

Hayes has been nothing short of brilliant thus far. He had 22 points, 12 assists and 11 rebounds in a win over Concordia, giving the program its first triple-double since 2000. Hayes also had 22 points, six assists and five rebounds in a win over Stonehill. Right now, he’s ranked among the NCAA Division II leaders in field goal percentage (61.9 percent) and assists (7.2 per game)….

OK, the Great Hagueini was 2-2 in the state sectional semifinal picks, so he has a 9-3 record in the state playoffs overall. Unfortunately, the local teams went down to defeat, leaving the Marauders of St. Peter’s Prep to carry the banner for Hudson County into MetLife Stadium.

So here’s the final state playoff pick for 2016. Remember, don’t use it for any wagering unless it’s for a hot pastrami on rye and an orange soda with your Uncle Looie.

St. Peter’s Prep vs. Paramus Catholic, Non-Public Group 4 title game, MetLife Stadium:  On Sept. 30, the Marauders dropped a hard-fought 28-21 decision to the Paladins, a game that they admittedly threw away with penalties and fumbles. Now, with the title on the line, the Marauders will be more careful with the ball. Johnathan Lewis will go down with some of the other great Prep grid standouts over the years. The Marauders get state title No. 5. St. Peter’s Prep 21, Paramus Catholic 14.—Jim Hague