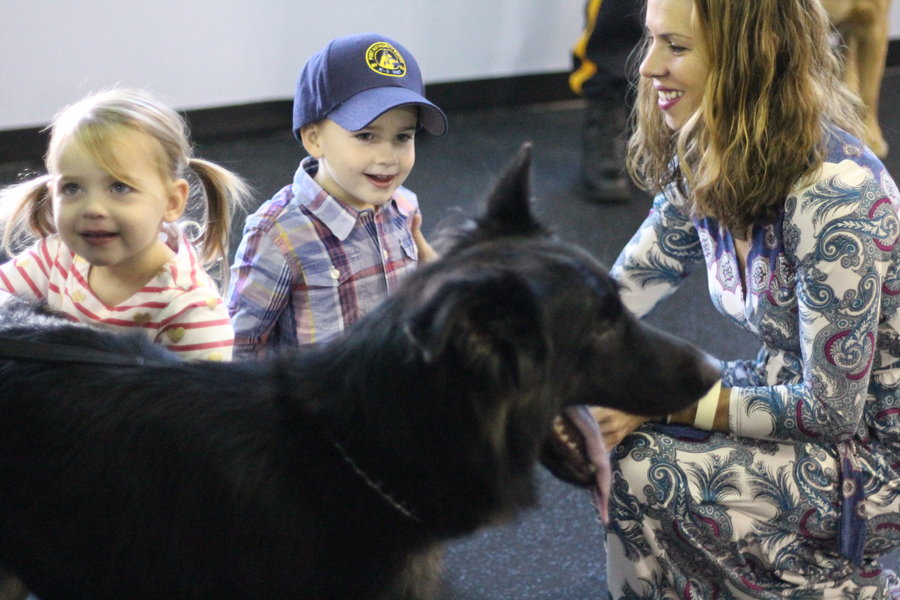 One by one, Port Authority police officers and their partner dogs walked to the front of the room at the Port Authority facility in Jersey City to receive their diplomas. The Oct. 26 ceremony was as moving as any graduation you might see in June, proud police officers escorting their highly-trained canine partners, who will become teams to routinely patrol facilities throughout the region.
Each man-dog unit successfully completed a rigorous training course that started last July and included more than 350 training sessions resembling a game of hide and seek, as well as training to disclose drugs and explosives.
The seven dogs in this ceremony received certification for their ability to detect explosives. The teams were awarded certificates and the dogs given badges signifying their graduation from the program.

_____________
“There is no more reliable partner than a canine partner.” – Michael A. Fedorko
____________
After the ceremony, the seven units will be dispatched to service at Port Authority airports, tunnels, bridges, terminals, rail systems, and other properties. Others will work for New Jersey Transit Police, New Jersey Human Services Police and the United States Park Police.
Michael A. Fedorko, superintendent of the Port Authority Police, said dogs have been used in conjunction with public safety for more than a century.
“There is no more reliable partner than a canine partner,” he said. “Dogs have been involved with law enforcements since the 1800s.”
He said the relationship between dog and owner goes beyond the nine-to-five regimen of a normal job.
“The dogs are with the officers off duty and on, and the dogs come to rely on the care they get from these officers,” he said.

The Port Authority police established its canine unit in 1985 with three dogs, two of which were assigned to the PATH system and one to the Port Authority bus terminal in Manhattan. In 1996, the PA expanded the unit to include explosive detection animals in response to the crash of TWA Flight 800. The unit has since been expanded to include drug detection.
In order to graduate, officers and dogs must pass a physically challenging course, and the officers undergo hundreds of hours of K9 training.
Training started on July 18 and concluded with the graduation ceremony on Oct. 26, said Sergeant Thomas Hering, who serves as canine training supervisor.
“They trained hard in August and September,” he said.
Four of the seven dogs that graduated on Oct. 26 were German Shepherds, the most popular dog in the program. But other types of dogs include Labradors, golden retrievers and other breeds.
The dogs specialize in either explosives or narcotics, but not both.
Perhaps the most famous Port Authority K9 ever was Sirius, who perished in the collapse of the World Trade Center’s South Tower on Sept. 11, 2001.
A monument and dog run has been dedicated to Sirius near the foot of the Bayonne Bridge, one of the facilities that are overseen by the Port Authority.

While the dogs received a lot of attention prior and after the ceremony, the dogs know when they are on duty – although they also take clues from their handlers and barked when the audience applauded. Sometimes they barked at each other while waiting to get their badges.
The Port Authority has more than 60 canine units as part of its force. The unit has its own supervisor and sergeants that oversee the officers and their various duties.
The current graduates include three Port Authority officers and their canine counterparts: Steven Annarelli and his K9 Sarik, Steven J. Mamiglietti and his K9 Buck, and Michael Fisher and his K9 Tyson.
NJ Transit police saw two of its officers and canines graduate: Stephen A. Nicosis and his K9 Ares, and Mark Spiritto and his K9 Ranger.
New Jersey Human Service Police and United States Park Police each had one officer and canine graduate: Walter M. Kelly with his K9 Falco, and Mark A Faraci with his K9 Laika.
Also honored at the ceremony where the police assistant canine trainers Sergeant Keith Conway, and police officers, Kurt Engelhardt and Even Weinberg.
Right Reverend Dr. Taras Chubenko, Port Authority police chaplain, blessed each canine team concluding the ceremony.
Al Sullivan may be reached at asullivan@hudsonreporter.com.