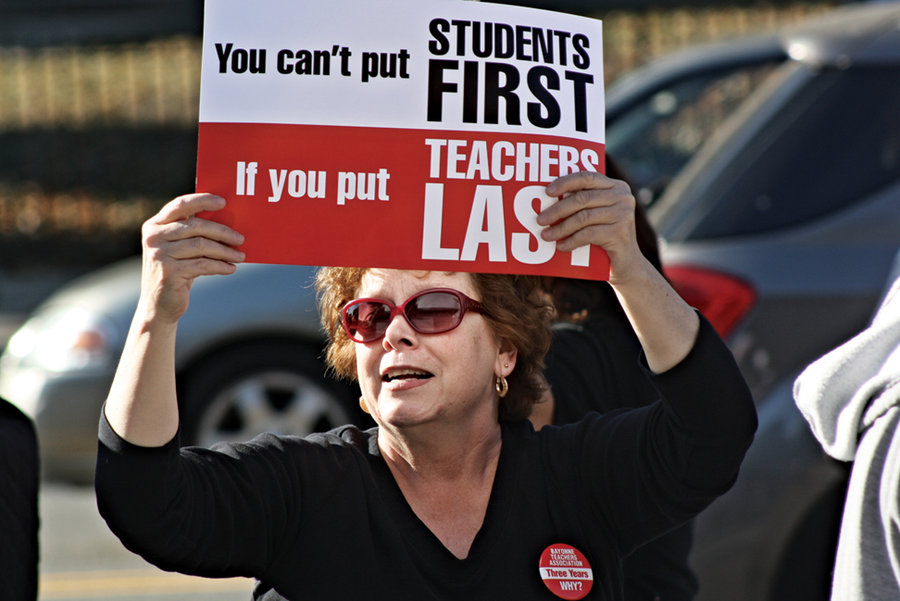 The seemingly endless quest for a settlement of the teachers’ contract was complicated last week when William Blanchard, a math teacher at Bayonne High School, sent out a letter to union members asking them to vote to impeach Bayonne Teachers Association (BTA) President Alan D’Angelo at an upcoming union meeting.
The letter charged D’Angelo with working against union member interests in the 17-month negotiation for a teachers’ contract. Blanchard charged D’Angelo’s with a lack of results. In the letter, he said that demands of union members have not been met, including to maintain their current healthcare plans and not have a frozen year or added steps to the salary guide. He also alleged D’Angelo failed to follow union bylaws and accused him of acting in his own self-interest by perpetuating the negotiations for “selfish, personal, or negligent reasons.”
It is unclear whether the majority of teachers feel such disdain for the union president. William Blanchard and Alan D’Angelo could not be reached for comment at press time.

Meanwhile, back at the ranch

The Bayonne Board of Education (BBOED) and the BTA have not suspended their negotiations to reach a new teachers’ contract; the BTA has been without a contract since July of 2015.The BBOED made a fourth offer to the BTA at a negotiation meeting on November 21, according to BBOED trustee and member of the negotiating team, Mikel Lawandy.
The current offer would take effect retroactively, and raise teachers’ salaries 2.62 percent in the first year, 3.8 percent the second and third year, and 3 percent in the fourth year, according to Lawandy. He said that no steps were added to salary guide, nor have the bubble steps been broken.
The BTA has until November 30 to accept, due to a state deadline for a proposed change in teachers’ health insurance policies. Teachers would have the option to switch from NJ Direct 10, which they have currently, to NJ Direct 15.The change would save the BBOED about $400 per teacher but may increase premiums for those who choose to switch, depending on the individual’s health history. Teachers would not be required to change insurance plans, but they would have to pay the difference in cost to the board.
“If we cannot move to Direct 15, then we’re going to have to reduce or withdraw the offer,” said Lawandy, adding that the savings from the insurance change is budgeted into the offer.

“What I’m trying to do [in the contract negotiations] is pay everybody what they were due on the present salary guide and secure a raise for everybody.” – Alan D’Angelo
____________

BBOED Trustee Chris Munoz supports the offer, saying that the raises in the four years offered are at or above the state average in raises for teachers. “This will be one of the best deals in the state between a board and the teachers’ union,” said Munoz. “We just want to build bridges with them.”
The state average for a teacher salary increase was 2.52 percent in 2015-2016, according to the New Jersey School Boards Association, but in terms of median teacher salary, the Bayonne School District is last in Hudson County at $55,690. The Bayonne School District ranks 495th out of 647 school districts, including charter schools. Twelve districts ahead of Bayonne are charters, which average a lower median teacher salary than public schools. Sixty-one charter districts rank below Bayonne.
President of the BTA, Alan D’Angelo, could not be reached for comment on this specific offer. In October, he told the Bayonne Community News, “What I’m trying to do [in the contract negotiations] is pay everybody what they were due on the present salary guide and secure a raise for everybody.”
D’Angelo’s critique of the district has always been its inability to retain and attract talent, which he attributes to low salaries relative to the district’s competitors. At September’s BBOED meeting, it was reported that four teachers resigned who had been employed for a relatively short period of time. “Those people leaving impacts the district,” said D’Angelo. “If you keep cycling in new teachers, it affects the quality of education. That, I believe, is being caused by the lack of a contract and the poor salary guide in place.”
The BBOED is about to enter its third year as an elected board after the public decided in a referendum to change from a system where trustees are appointed by the mayor. “I thought it would have gotten better after the elected board [came into place],” said D’Angelo. “But that didn’t happen.”