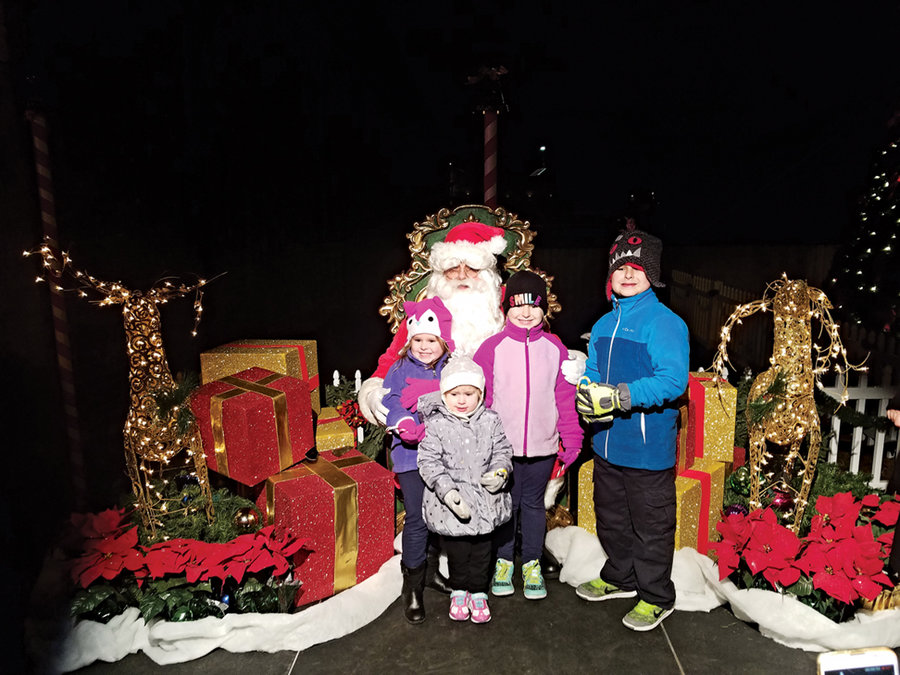 Bayonne celebrated the start of the holiday season with its annual tree lighting ceremony on Tuesday, November 22, to the accompaniment of the Bayonne High School jazz ensemble, the All Saints Catholic Academy choir, and local guitarist Al Knight. Lights shone on trees along Broadway, but none so brightly as the one between 22nd and 23rd streets at 481 Broadway. Mayor James Davis and the city council posed for photos, as did countless residents after getting a photo op with Santa next to the tree.
Waiting in line to see Santa on the 30-degree night with her kids, AgataSlusarea said, “That’s number one to see Santa, and to listen to the music and dance a little bit.” Her kids rode a trackless train around the block, which was shut off to traffic to allow for the music stage and train. “The kids went [on the train] a few times already,” Slusarea said.“They didn’t want to get off.”
Standing nearby, sisters Gabby, 8, and Anastasia, 7, said they knew what to ask Santa for. “I want a robot that can do anything I want,” said Gabby, adding that the robots would ideally do her homework. Anastasia said she wants “Splashlings and num-nums.” Splashlings are toy figurines, while num-nums are food that is “gooey and smells delicious.” They saw a light traveling across the sky, which they were certain was Santa’s sleigh. They pointed and shouted, “Santa, there he is! It’s really him!”
“I’m here sharing an experience with my son, said Alan Paredes with son, Alan Jr. “It’s never too early to get into the giving season.”
While the jazz ensemble huddled for warmth behind the stage, ensemble member Mackenzie Stauss said the band played the event last year, too, only the tree was in a different location up the street. “They cut it down. It was so sad,” she joked. “Good thing they planted a new one.”
The band played “Joy to the World,” “Silent Night,” and “We Wish You a Merry Christmas,” among other holiday classics.
Ms. McKinnon, jazz director at BHS, said, “The season is just getting started.” The jazz band consists of 20 students, while the ensemble has eight. The band is scheduled to play the winter symposium on December 8 and various festivals throughout the year.

The decorations this year are reminiscent of “Old Bayonne,” as many were referring to it. “The Old Bayonne was like this where they used to have events like this out in the street and put out all the Christmas decorations,” said Councilman-at-large Juan Perez, adding that piped Christmas music used to play on Broadway throughout the season. “It was stupendous,” he said.“It really put you in the Christmas mood.”
Kathy Sharkey, 60, was on her way to the Rite Aid on 22nd Street when she encountered the event. “I was so happy to see this. It reminds me of my childhood when the lights would go all the way across [Broadway],” said Sharkey, noting the only difference was that the lights were multicolored rather than the white lights on display this year. “It thrills me, and I’m 60, but this thrills me. They did a good job with the lights.”