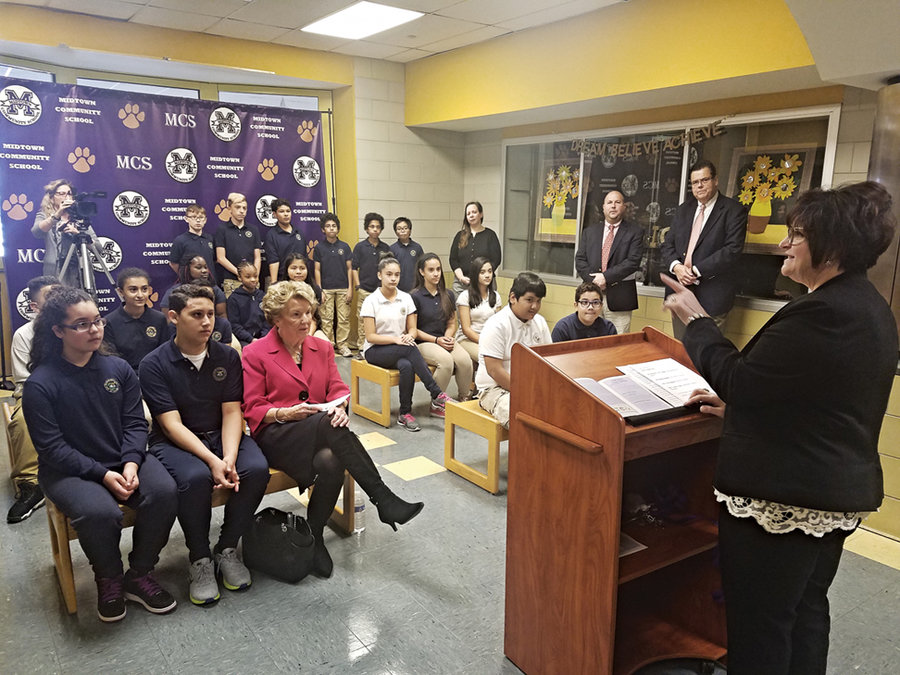 The Bayonne School District hosted a grand opening of the STEM Studio at Midtown Community School, a workshop that engages elementary students in concepts of Science, Technology, Engineering, and Math (STEM) through the use of robotics, computers, and collaborative problem-solving exercises.
The ceremony, which was held on Wednesday, November 23, showcased student projects in robotics. One team was using tablets to program and control spherical robots to maneuver around a hoola hoop on the floor. Sixth-grader Anthony Zepeda was tapping buttons in an app on his tablet, making the robot turn red, blue, and yellow. “You can drive them around to go in a square, triangle, a bunch of shapes,” he said. “It’s to find out how great [technology] can be.” Meanwhile, other students were showing off their robots assembled with a Bluetooth component, a battery, and a motor to work seamlessly with their Chromebooks.
Another group was assigned a much lower-tech exercise designed to teach traditional engineering concepts with limited resources (in this case, 250 Popsicle sticks). The objective was to make a popsicle stick skyscraper that balances on its own. “The first time we did it, it took a lot of sticks, so we had to break it apart and do it again,” said sixth -grader Aanisa Shareef. She described the process: “You have to sketch it out, measure it, and actually visualize it to see if it will actually work.”
Trial and error is essential to early STEM education in what co-creator of the studio, Nicole Facchini, calls the “concept of fail.” “It’s the first attempt in learning,” said Facchini. “We encourage the students to understand that an engineer’s job is never done. They’re constantly going back, re-evaluating, revisiting, and improving their creations.” Shareef felt her project was improved after much practice, suggesting that her team could have built the tower another foot higher.
Facchini has a master’s degree in STEM in elementary education, teaming up with sixth-grade teacher Denise Leonard to co-create the studio in the Midtown Community library. Facchini said that students can see from their science classroom the Bayonne Bridge construction, which she uses to illustrate the concept that no project is ever truly finished. She tells her students that if Apple’s iPhone were right the first time, then there wouldn’t be an iPhone 7.
“I really want [students] to see engineering in their everyday life,” Facchini said.“From their cell phones to their toothpaste to the Bayonne Bridge to their laptops. It’s all a part of the process.”

Bayonne High School already has a STEM lab, and the studio at Midtown Community School is meant to prepare students for their high school counterpart. The program is set to extend to all schools in the district, and by February the district hopes to have its Junior Robotics club up and running.
More than two decades ago, the Bayonne School District began using computers to do small projects and activities. Now, Superintendent Patricia McGeehan is astounded with the technological progress since then and revels in preparing students for jobs of the future.
“If we don’t start to get on the trail of innovation, you just never get there,” said McGeehan. “So the idea is to start moving slowly and have the vision to know that this is where we have to take our students into the 21st Century.”
At the ceremony, she offered words of encouragement to students. “This project is just another opportunity for you to learn new ideas and where you want to go with your life and career,” she said. “Whatever you learn here, even if you don’t want to be in the STEM field, it’s going to help you become a better thinker.”