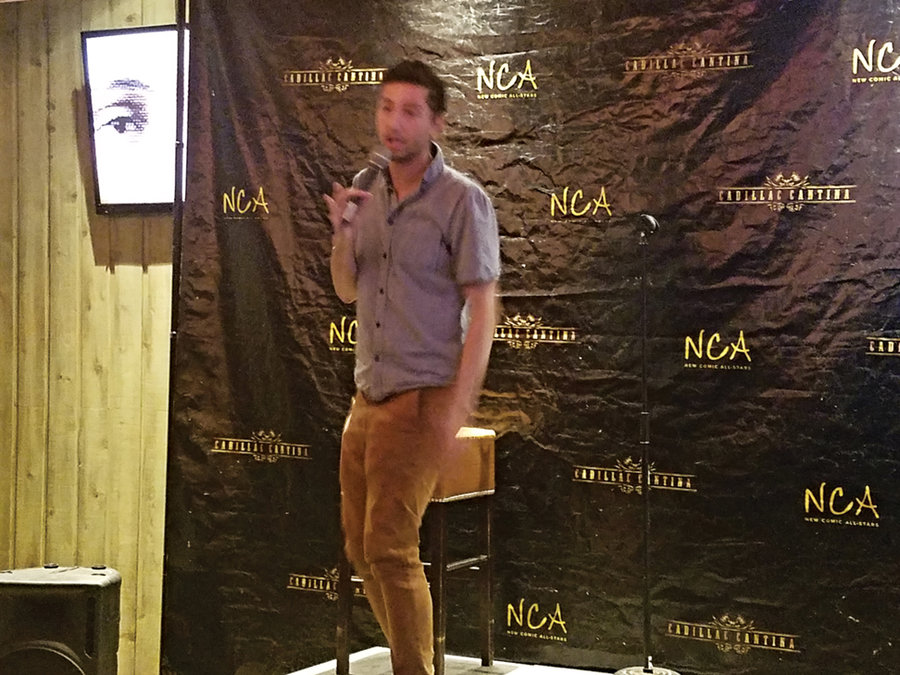 Hoboken-based comedian Dan Frigolette was performing recently at Hoboken’s Cadillac Cantina bar and told a story about a recent visit to Oklahoma.
“I said I lived [near] New York and they go, ‘Oh, I don’t know anything about New York. What part?’ and I say I live in Hoboken…They go, ‘No, that’s not New York, that’s New Jersey,’ like, oh, really, you’re an expert on New York City all of a sudden. People even in New York think Hoboken and Jersey City are 40 minutes away.”
While Hudson County may be overshadowed by the cultural mecca across the river, it feeds off of Manhattan’s immensity yet has its own special flavor. And that’s probably why a comedy scene has been burgeoning in this area lately. Smaller bars and restaurants have been making space for comedy shows and spoken word nights.
However, local comics have found that attracting locals away from New York City can be a challenge.
“It’s hard to feel not in the shadow of New York City,” said Frigolette, noting that so many people here work in New York and forget about culture here in their community. “Their first stop is New York, when they want to do something for entertainment. To get a community thing going [in Hudson County] is more challenging.”
Frigolette has successfully organized NJ Funny Fest and the Hoboken Comedy Festival, and also hosts WOW Comedy, a monthly comedy show at the Shannon bar in Hoboken. He also teaches English and creative writing at the college level. “We’re just trying to build community concern,” he said, “so people come out and see some shows.”

County comics get some laughs

Comedy events are held all over, including DiGiorgio’s Bar in Bayonne, the Meadowlands Comedy Club in Secaucus, Raval in Jersey City, and the Cadillac Cantina in Hoboken, where Frigolette hosts comedy nights.
Commissioner of Public Affairs for Union City Lucio Fernandez is planning a new comedy series to begin in late January at the Union City Museum. “Because cabaret nights have been so successful, we’re looking to expand,” said Fernandez, who is in the process of upgrading the center’s equipment to better host events. “Every single event we’ve had has been packed, so we’re looking to build on that.”
Fernandez, an entertainer by trade, has done standup and cabarets in New York, and hopes to bring that experience to Union City. The comedy show will be a monthly event, and will be separate from the cabarets that include jazz, theater, and film.

New York City-based comedian Jason Scoop was performing at the Cadillac Cantina on a recent evening with Frigolette. “My tattoo is ruining my life,” Scoop told the crowd, pointing to a very real “Trump 2016” tattoo on his forearm that he got at the start of the primary season. He said he got it “thinking he would lose for sure, but then he started winning and now I look like an a-hole.”
Sean Morton, who grew up as a “chubby Italian kid” in Bayonne, started standup in Hudson County, but is now a road comic, performing all over the tri-state area.

_____________
“Hudson County in general is tough. It’s hard to feel not in the shadow of NYC.” – Dan Frigolette
____________
“I’m a 40-year-old married guy, so that’s my sort of demographic,” he said. “I’m not a Brooklyn hipster. I like to say the things you want to say, but you’re too afraid to. It’s all about honesty.” His last Hudson County performance was at DiGiorgio’s in Bayonne. “It was great to do a show less than a mile from your house,” he said, “and nice to do something for the locals.”
Jersey City’s comedy strip is the Grove Street section downtown. Jeff Druck, a Jersey City-based comedian who has appeared on Last Comic Standing, hosts a comedy room on the first and third Wednesday of every month at Raval in Newark Avenue’s pedestrian mall with his best friend and comedian colleague, Matt Jenkins.
“There’s a contortionist on Newark Avenue, and he bends his body into a piece of luggage,” joked Druck. “I said that’s definitely a suspicious package.”
Druck said the comedy room at Raval puts on “all-star lineups” of comics, who often riff on the area to open their sets. Harrison Greenbaum, also from Last Comic Standing, is performing on Nov. 2.
Druck said the growing art and entertainment culture in “In Jersey City, people like having the advantages of having NYC there, but there’s kind of an escape when they get home,” said Druck. “It’s perfect for comedy.” He calls Jersey City’s art culture an “untapped market” for comedy patrons and is excited “to establish a [comedy] scene and grow it.”

In Secaucus, Joe Loesner, former talent director at the Laugh Factory in New York, now runs the Meadowlands Comedy Club. “I pretty much handpick all the comedians,” Loesner said. “I like comedians who are real and coming from the heart and talking about real-life experiences.”
Loesner said that comedy facilitates compassion and can be an outlet for people to forget about their own troubles and laugh at someone else’s. “People like to take tough moments and trying times to say, ‘hey world this is what’s happening; it’s funny. It may not always be funny to me but hopefully you get a laugh out of it.”
Jimmie Lee, “The Jersey Outlaw,” performs at the Meadowlands Comedy Club and describes himself as “more of an old-school style ’80s comic,” comparable to Rodney Dangerfield and Don Rickles. “I’m a rapid-fire comic. If you’re not laughing, I’ll hit you with another joke,” said Lee, who is a dentist by day. “My character is a wise-guy character.” Lee said. “[The show] gets your mind off your work and everyday problems. You have fun.”
Rory Pasquariello can be reached at roryp@hudsonreporter.com.