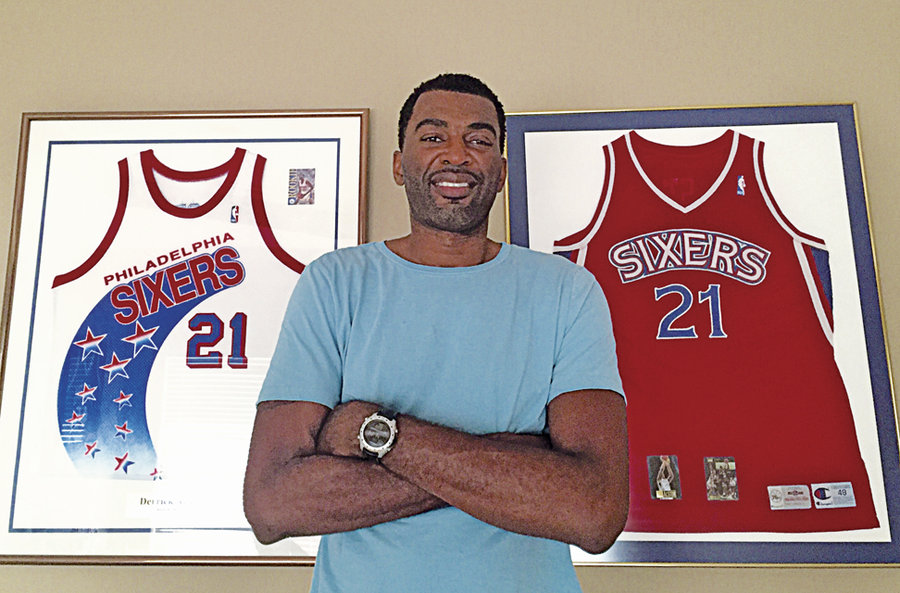 If you were an athletic kid growing up in Hoboken in the 1980s, you had to play the trifecta: baseball, basketball, and football. Derrick Alston had gotten a taste of Little League baseball. But in Hoboken High, he wanted to be part of the famed Red Wing football tradition, headed by legendary coach Ed Stinson. Chipper Benway, a former Hoboken High football and baseball star and currently head baseball coach at Union City High School, was a teammate.
“I was a wide receiver, and one day in practice I went out for a pass,” Alston recalled. “I was running across the middle, and Chip hit me so hard that I suffered a hairline fracture in my chest. Chip took it all away from me. He still remembers that play and knows he derailed my football career.”
It’s hard to believe that 25 years have passed since Derrick Alston was a basketball star at Hoboken High. That’s right, basketball. That run-in with Benway sealed his fate. In 1990, he helped the Red Wings to one of the best seasons in school history, winning both the Hudson County and state sectional championships.
Back then, no one, including Alston, could have imagined where basketball would take him. “When I started playing basketball in fifth grade, I never thought it would end up like this,” said Alston, now 43 and living in Houston with his wife and two children.
When Alston first arrived in Hoboken from the Bronx, he was a skinny first grader.
“All my brothers were short, so we played soccer,” Alston said. “Then I played baseball. I didn’t start playing basketball until I was in fifth grade at Wallace School, when I was taller than most of the other kids, but I wasn’t any good at it.”
Alston remembers going to Legion Park in Hoboken and wanting to play basketball with the rest of the kids. “I used to get abused, because I was so big and lanky,” said Alston. “But I enjoyed playing and eventually had some success.”

As a freshman, Alston was already 6-foot-4. He would eventually grow to 6-foot-11. As Alston grew taller, basketball coach Gene Sparta applied the pressure. “He knew that I could have some success,” Alston said. “But I was still awkward trying to catch up to my height.”
His senior year his teammates were guys like Ronnie Forbes, Mike Purvis, and Eddie Eusebio. That “really got me ready for the next level,” Alston said.
While a senior still learning the game, he was receiving offers from local colleges, but Alston was spotted by then-Duquesne head coach John Carroll, who later would go on to coach the Boston Celtics.
“I felt comfortable with Coach Carroll, because he was an East Coast guy,” Alston said. “He told me that if I went to Duquesne, I would get a chance to play right away.”
Duquesne was the only mid-major college to offer Alston a scholarship. Seton Hall and Rutgers, in Alston’s backyard, didn’t approach him, despite his height and Hoboken roots.

Alston packed his bags and headed for Pittsburgh. “I was really going to Duquesne just to get an education,” Alston said. “I didn’t have any thoughts of going pro.”
As a freshman in 1990-91, he started after the first 10 games and made the Atlantic 10 All-Rookie team. He averaged 11.3 points and 6.3 rebounds per game and continued to improve.
“During my sophomore year one of my coaches brought up the idea of possibly being drafted,” Alston said. “I knew it was going to be tough, but it was then in my head that I had a chance.” Alston started to get invited to the top NBA camps, earning an invitation to play with the 40 best college players at the United States Olympic Festival in San Antonio. “That summer, I started to get a lot more confidence playing with the better guys,” he said. “I played great in three of the NBA camps, but the third in Chicago, I thought I was burned out and exhausted.”
He finished his college career in 1994 with the second-highest-scoring total in the program’s history, trailing only Dick Ricketts on the all-time Duquesne scoring list.

It was time to focus on the draft.
Though he was being touted as a first-round pick, he was taken in the second round by the Philadelphia 76ers in the 1994 draft.
“I was confident I could make the team,” Alston said. “The Sixers weren’t very good then.”
Coached by John Lucas, the team won only 24 games, though it had Clarence Weatherspoon, 7-foot-6 center Shawn Bradley, and its top scorer, point guard Dana Barros. Alston saw action in 64 games, averaging 4.7 points and 3.4 rebounds.
“But it was hard to find my niche,” he said. “The NBA was so physical and powerful. I thought I had a good enough skill set, in terms of shooting. I was playing like a point forward, using my quickness and ball handling. I played some good minutes.”
The 1995-96 76ers won only 18 games. Alston played in 73 games that season, starting in 41 and averaging 6.2 points and 4.1 rebounds per game.
“I thought it was working out well for me,” Alston said. But the Sixers released him after his second season. He was only 23.
Though the Charlotte Hornets were going to give him more money, he signed with the Seattle Supersonics. “I went to Seattle, but I wasn’t in great shape there,” Alston said. “I didn’t push myself, because I thought I had it made.” He was waived and then the Atlanta Hawks signed him, but he was released after playing just two games. “Atlanta didn’t play me, so I asked for my release,” Alston said. “I didn’t put in enough time to work on my craft.”
At age 24, Alston’s NBA career was over.

Alston then chased his basketball dreams overseas, playing first in Turkey, where he helped his team win a championship, then eight years in Spain, where he was named the Most Valuable Player of the Spanish league playoffs in 1999.
“Spain was the second-best league behind the NBA at the time,” Alston said. He played with current Chicago Bulls All-Star Pau Gasol. “It was a competitive league,” Alston said. “I had four guys on my team who played in the NBA.”
In 2006, Alston had stints with pro teams in France and Russia. In 2007, he was back in Turkey, before having a stellar season with the New Zealand Breakers in 2008, leading his team to the league playoffs for the first time in club history.
In 2009, Alston signed with the famed Boca Juniors in Argentina and remained in the Argentine pro league for three seasons.
At that point, he’d reached a crossroads.
“I was 39 years old,” Alston said. “I had a contract to play the next season in Argentina, but my son was going to be a freshman in high school, so I called it a career.”

Alston came back to wife Robin, son Derrick Jr., and daughter Avery, now 9, and found work with the Houston Rockets as a player development coach.
He spent three years with the Rockets, but his contract recently expired; he’s looking for another coaching position in the NBA and working with Derrick Jr., now 17.
“He’s a guard,” Alston said. “He’s long and lanky like his dad, but he’s skilled.”
The skinny kid from Legion Park and Wallace School did pretty well for himself. “I got to see the world,” Alston said. “I got to see the country. I played against some of the all-time greats.”
Alston doesn’t like to hear that he’s considered the best basketball player ever to come out of Hoboken.
“I was just fortunate that I made it the farthest,” he said. “I might live somewhere else, but I’m from Hoboken and proud of it.”
And Hoboken is proud of Derrick Alston.—07030