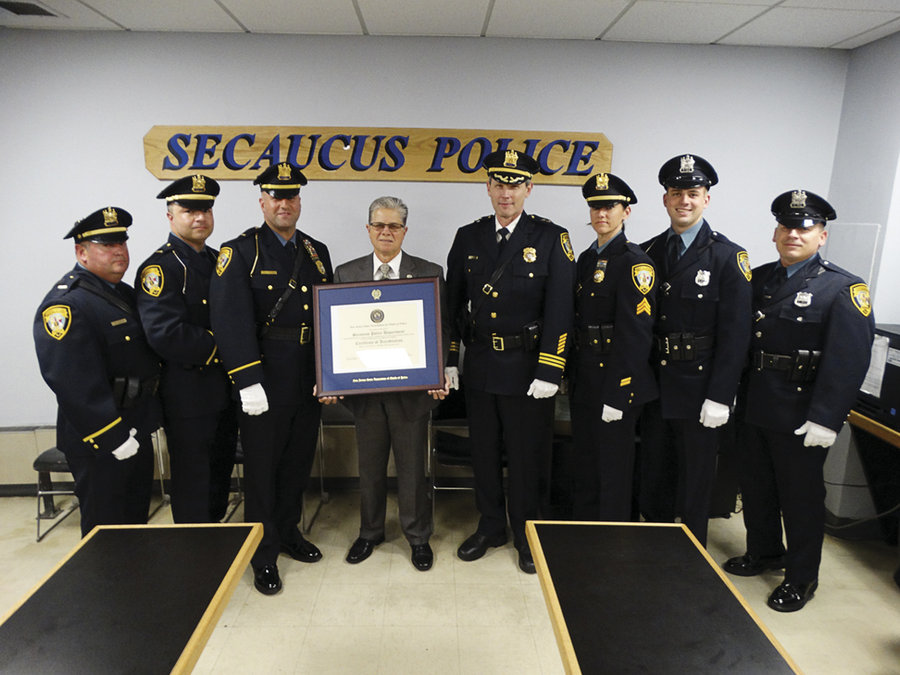 After an intensive, year-plus overhaul of policies, procedures, operations, software, and much more, the Secaucus Police Department has received accreditation by an independent reviewing agency, joining an exclusive group of departments in New Jersey and across the country.
State Accreditation Program Manager Harry J. Delgado from the New Jersey State Association of Chiefs of Police (NJSACOP), the agency that administers the accreditation process, visited Secaucus on Nov. 10 to present the department with a certificate of accreditation.
“What is really remarkable about the Secaucus Police Department,” Delgado told the police, residents, and council members in attendance, “is that when we come to a police department at the end of the rigorous two-year self-assessment phase, we test them to show proof that they meet the standards. There’s usually something that we find. And trust me, we try. In the case of the Secaucus Police Department, there wasn’t a paper out of place. They had a perfect final on-site assessment. That is incredible. It seldom if ever happens. And for that I think you need to be certainly recognized.”
In order to be accredited a police department must adhere to more than 105 standards developed by the NJSACOP. Of the more than 500 police departments eligible for accreditation in New Jersey, only 144 have achieved that designation. Secaucus is the second in Hudson County, after Harrison.

_____________
“In the case of the Secaucus Police Department, there wasn’t a paper out of place. They had a perfect final on-site assessment.” – Harry J. Delgado
____________
“We’re very pleased as a council about the hard work beginning with Chief [Dennis] Corcoran through Acting Chief [John] Cerny to Chief [Kevin] Flaherty,” said Councilman Gary Jeffas, the police liaison, “by all of the officers from top to bottom and the administrative staff to make this happen.”

Accredition offers numerous benefits to the department. Chief among them is consistency in procedures and reporting. All policies have been brought into compliance with state and federal standards.
“The accreditation process was quite an undertaking,” Police Chief Kevin Flaherty said. “All our policies were reviewed and updated. All our general orders and procedures used to be in giant book. Now they’re on computers. They can look up from their car or smart phones.”
Every aspect of police work was included, from search and seizure and handcuffing to internal administrative policy.
Physical changes were also required. “One of the biggest was our evidence room,” said Flaherty. “It had not been inventoried or cleaned out for over 35 years. It’s all cleaned out now. All evidence no longer needed was either destroyed or given back to its rightful owner.”
The changes not only improve efficiency, they impact the bottom line. According to Delgado, accredited agencies have 11 percent fewer police professional liability claims, 18 percent fewer worker compensation claims, and 31 percent fewer auto liability claims. As a result, insurance companies allow a discount on insurance premiums to accredited departments.
For Flaherty, who was named officer in charge of the department in Dec. 2014 and officially sworn in as chief on April 28, the accreditation process paralleled his taking command of the Secaucus Police Department. “It was perfect for my situation, “ he said. “Gave me a blueprint on how to proceed, what policies and procedures to do. It actually made my transition much easier.”
Lt. Dennis Miller was the accreditation manager for Secaucus, overseeing the process for the department. “He did an excellent job,” said Flaherty.

The NJSACOP is a 102-year-old organization that offers programs in staffing, promotions, training, professional development, leadership development, and more, on a state, national, and international level.
Accreditation is good for three years. The department must submit regular updates to the NJSACOP throughout that time, and then undergo the full two-day review for reaccreditation.
Meanwhile, standards are constantly evolving. “In May of 2015 we added five new ones,” said Delgado. “They evolve based on contemporary issues that might be challenging at any one particular time.”
For example, body-worn cameras have been a hot topic recently. Police are under a lot of scrutiny nowadays, with numerous high-profile incidents in the news.
“All the more reasons for agencies to seek accreditation,” said Delgado. “They want to protect themselves. Accreditation offers an extra layer of protection.”