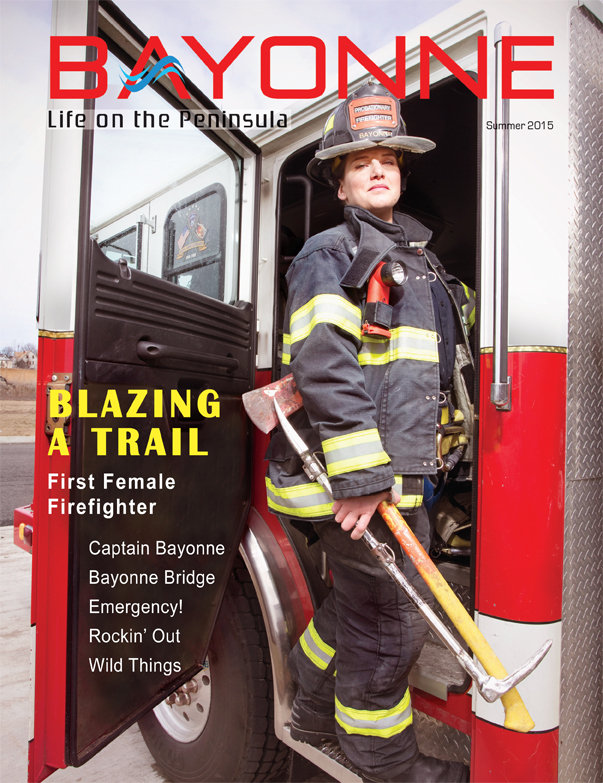 When a magazine comes out only twice a year, you sometimes find yourself seasonally haywire. You’re tromping around in the snow, slipping on ice, and braving bitter winds for stories that will appear in spring and summer. Hats off to our photographers, who did yeoman work to get images that were not frozen in time.
In fact, a couple of stories are quintessentially spring. Photographer Chris Loupos captured Hudson County Freeholder and Washington Community School principal Kenny Kopacz playing baseball with our writer, Randi Roberts, on the Pony League field. Behind them, in a postcard from Bayonne, huge container ships move slowly toward the bridge.
Max Ryazansky shot Nestor Lenin Uraga in the act of painting a mural on a Bayonne building.
The Bayonne Nature Club’s Joan Brunner and Patricia Hilliard shot some beautiful pictures of some of the city’s non-taxpaying residents for our wildlife photo essay, along with our own Victor M. Rodriguez, who has done scores of shoots for BLP.
Other stories are evergreen. Tara Ryazansky was on the job with folks from McCabe Ambulance Service. Make no mistake. These EMTs have your back.
On a lighter note, Tara came away star struck after hanging out at the Starting Point with astrologer Judith Aurora Ryan.
By far, one of our most poignant writing teams was Patty Smith, collaborating with her Dad, Neil Carroll, for our retrospective on the Bayonne Bridge. She helped him marshal his memories of the city’s most iconic structure, as it goes through its massive raise-the-roadway project.
You were no doubt struck by the compelling portrait on our cover. That’s Cailin Brodel, Bayonne’s first woman firefighter—and probably the last person you want to see at your door. Read about her and much more as we celebrate life on the Peninsula—BLP