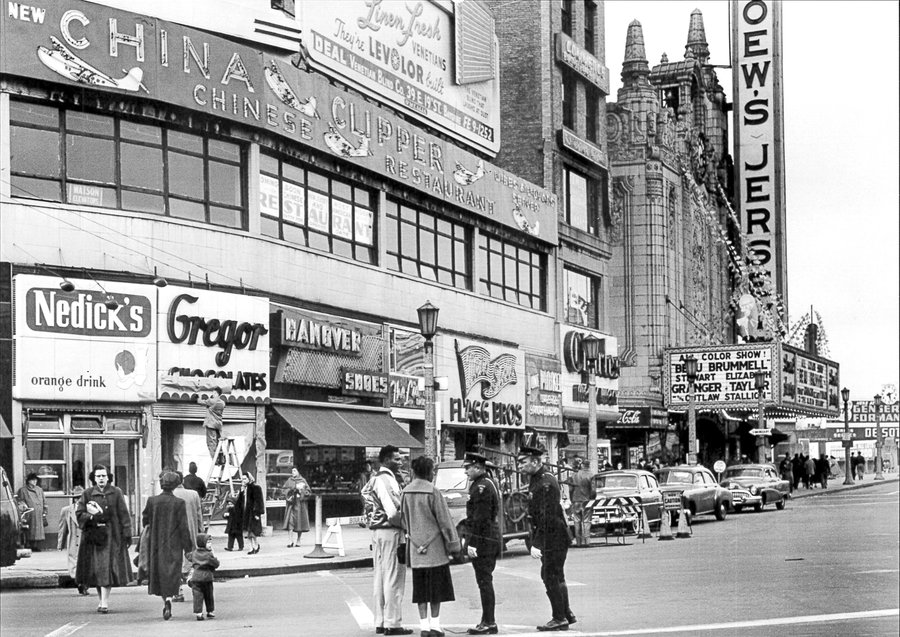 “Their hot dogs are tops!” “I can never eat just one,” “It beats eating franks from a street vendor or a hot dog truck,” and “the best hot dogs in the Tri-State area.”
These are just some of the comments Jersey City folks have made about the irresistible, all-beef grilled hot dogs at Boulevard Drinks. Centrally located in Journal Square across from the PATH station, it has been in business since 1937.
My family and I are longtime customers. When I was a kid, my mom bought hot dogs from there and snuck them into the movies at both the Loews Theatre and the State Theater. We even bought raw packs of hot dogs to make at home. Once, when we brought them to a family event, many of our older relatives ate them all, leaving none for us kids.
A key player in Jersey City’s history, Boulevard Drinks is to Jersey City what Nathan’s is to Coney Island.
In the ever-changing landscape of Journal Square, this iconic canteen has outlasted other institutions such as the State Theater, Pathway and 5 Corners bakeries, Gino’s Restaurant, Universal and A&P supermarkets, Bickford’s Cafeteria, and Sound Machine.
When time-honored Journal Square establishments were demolished for the construction of new properties, McDonald’s and the Three Little Guys from Italy pizza parlor moved across Kennedy Boulevard. But Boulevard Drinks is where it’s always been.

Journal Square is exploding all around Boulevard Drinks. The Square has always played second fiddle to downtown and the waterfront, where glass-and-steel high-rises tout gorgeous river and skyline views, convenient transportation options, and Manhattan commerce and nightlife just minutes away.
At the end of summer, ground was broken for the first of three towers, which will be part of the immense development project known as Journal Squared.
Kennedy Lofts is a new residential building in the area, and the old Jersey Journal building is slated to become rental apartments. Across from it, a 60-story tower is planned.
Changes to the iconic Loews Theatre, right next to Boulevard Drinks, should have a huge impact on hot-dog sales. Much ink has been spilled on a controversy that pits folks who want to keep the Loews closely linked to the community with affordable programming against those who agree with Mayor Fulop that it should be managed by a large entity that can attract world-renowned artists.
AEG Live, a talent-booking company, is poised to manage the theater, which will undergo a multimillion-dollar facelift.

Boulevard Drinks opens at 8 a.m. You can smell the grilled dogs from the sidewalk out front, which got me wondering, who the heck eats hot dogs for breakfast? “Overnight shifts,” says owner John Bardis, who’s there bright and early on a Friday morning to open the place.
The original owner sold it to John’s father, Speros, in 1962. Speros has retired but John oversees daily operations. As a kid, he worked with his dad to learn the business. John has an unusual pedigree for a hot-dog griller. He is a graduate of CIA, the Culinary Institute of America, but says the family business was a bigger draw than being top chef.
Bardis has a lot of nostalgia for the 1980s. “The Square was busier then with movie theaters and stores,” he says. His father used to boast that they had so many onions to chop that all of Journal Square would be crying. Back then, they had seven employees; now they have three.
Bardis also laments the fact that malls and online shopping have slammed the door on some Journal Square businesses. He’s not too wild about the digital age, either. Now customers sit on the stools, texting and emailing instead of “conversating.” Back in the day, his father would caution him not to talk too much to the customers because he “needed the stool for the next customer.”
Bardis got “a lot of heat” in 2005 when he replaced the iconic pink flashing neon sign with a new one. “The old sign was falling apart, and we couldn’t get parts for it,” he says. They also replaced the vintage “juice pumps” from the 1940s with modern machines that hold and dispense the classic orange and pineapple juice that pairs well with hot dogs.
And speaking of those dogs, Baris says they are custom-made by Sabrett and not available in supermarkets. His father bought the chili recipe when he bought the shop. John, his brother, and their father are the only ones who know the recipe.

Boulevard Drinks has been compared to New York’s Papaya Dogs, but many New Yorkers hop on the PATH and head to Journal Square. New Yorker Joshua Williams ventured to Jersey City one day to visit a relative in the 1990s. “On the way back to catch the PATH train I saw this hot-dog place and I was like, let me have one and then catch my train. Man, after finishing that first one, I had to have like two more, with chili and onions, and I have been coming back ever since to get my orange drink and some Boulevard Drinks hot dogs.”
Bardis says he would like to expand operations when the new development in Journal Square is complete. But for now, he’s content with what many call “the golden hole-in-the-wall hot-dog joint.”
“I feel great and honored,” Bardis says. “I see new people come every day as well as repeat customers.” Many of those repeat customers who were kids when they began going there are now bringing their kids and grandkids. “I believe it will be around forever,” he says.
When I leave the shop, a woman enters and orders two hot dogs. I don’t think she’s on the night shift. I think she just loves hot dogs for breakfast.—JCM