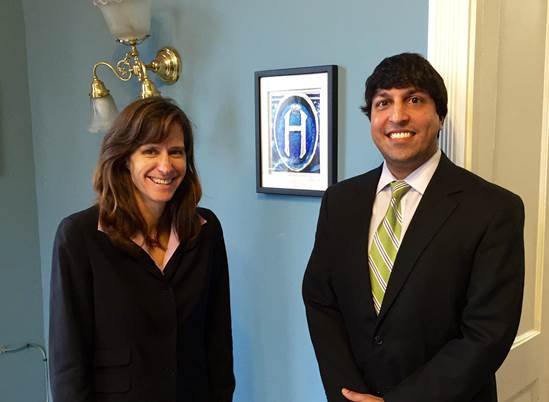 HOBOKEN–Vijay Chaudhuri will replace Daniel Bryan as the chief of staff to Mayor Dawn Zimmer, according to a statement released Thursday by the mayor’s office.
Chaudhuri lives in Hoboken. He most recently worked as director of community relations for U.S. Representative Joseph Crowley, who represents New York’s 14th Congressional District, which includes parts of Queens and the Bronx. Chaudhuri has a BA in Political Science from Wesleyan University.
Chaudhuri has also served as a 1st Ward Committeeman for the Hoboken Democratic Party. He was a leader of the effort to move municipal elections from May to November and has written topical letters to the editor of the Reporter in the past (see link below).
“I look forward to working closely with Chaudhuri in the years ahead to make Hoboken an even greater place to live and work,” said Zimmer. “His experience and knowledge of Hoboken will be a tremendous asset as we bring many exciting projects for our community to fruition.”
“I’m grateful for the opportunity to join this administration and serve the people of Hoboken,” said Chaudhuri. “I look forward to working with Mayor Zimmer as we continue to address the issues that matter most to our community.”
A Hoboken resident, Chaudhuri has been a public supporter of Zimmer. In 2012, he was one of the leaders of Vote Yes for November, the organization that sought to consolidate Hoboken’s municipal elections with the general election. Chaudhuri’s letters have supported Zimmer’s political associates, like County Freeholder candidate Phil Cohen.
He also criticized current Councilman Michael Russo and Russo’s cousin, Councilwoman Theresa Castellano. “No, Councilwoman,” he wrote in 2011, “your cousin did not technically break the law; his actions, however, were just as bad if not worse – he erased every ounce of credibility and trust with the residents of Hoboken that he had left as an elected official.”
To read our past coverage of Chaudhuri and his letters, click here.
Chaudhuri will become one of the few non-caucausians in a power position in Hoboken municipal government. Some have critiqued Zimmer in the past for not seeking enough minorities for city jobs, especially in managerial positions. However, Chaudhuri is not a member of either of the city’s largest minority groups.
Chaudhuri will begin his post on Feb. 24, 2015. His predecessor, Bryan, left to take a job at a public relations firm.
Have thoughts? Email editorial@hudsonreporter.com and put Hoboken in the subject head, or leave comments below.