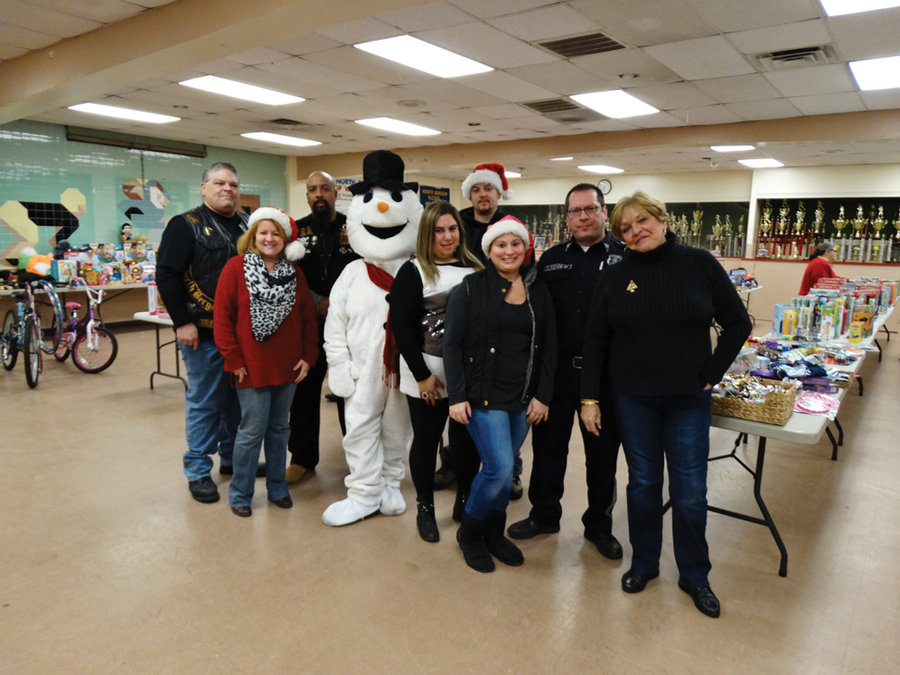 “It’s nice to be able to see the people that are benefitting from it,” said Craig Mac, road captain with the Lost Boyz Motorcycle Club. “It’s one thing to collect the toys, but to actually be here and hand them out to people gives you that warm, fuzzy feeling.”

Mac was one of several members of the Lost Boyz who spent the day on Monday, Dec. 22 helping distribute toys and meals to residents of North Bergen. More than 1,000 toys were collected and made available for free to local families in need through the second annual North Bergen Holiday Toy Drive, sponsored by the town’s Emergency Relief Department.

“These are all donations,” said Emergency Relief Coordinator Aimee Focaraccio, who arranged and ran the event. “We did a bunch of toy drives. We collect toys throughout all the schools. We did a toy drive at one of the new bars in town. The motorcycle club did a huge toy drive.”

The Lost Boyz collected toys for weeks before the event, then held a weekend toy drive in the Walmart parking lot. “There’s a big support group within our community that is always more than willing to help out with stuff like this,” said Mac. “Our club is from North Bergen so we’re based from around here but the people we know come from all over the place – all over Jersey and New York and beyond. We get support from all over but we always like to give back to our home community as much as we can. It’s the right thing to do.”

Also contributing was the local Policemen’s Benevolent Association, which donated $1,000 worth of toys. “Our PBA has got two unions: the supervisors union and then patrolmen union. Each donated $500,” explained Police Officer Frank Ponce, who along with Det. Michelle Bartoli purchased the toys that were donated to the drive. “This is our first year doing this. It’s not going to be our last.”

Even the knitting club at the library got into the act, crafting scarves and donating them to the program. More than 150 families received gifts and had happier holidays thanks to the toy drive. Held at the Recreation Center at 6300 Meadowview Ave., the event was mostly staffed by volunteers.

“She calls me, I come,” agreed Maggie Collins, stacking gifts on one of the long tables. “I enjoy it and I’m retired and this is what I like.”

This was the second year for the Holiday Toy Drive, after a small-scale launch in 2013.

“I’m expanding the program, so at the beginning of the year I met with all the guidance counselors and the school nurses from each school to kind of make them aware of what I do and how I do it,” said Focaraccio. “Because the best way to get to the children in the school system is to go through the guidance counselors and the nurses. If they know what I’m doing, I’m able to work with them so they can refer people to me that may be in need.”

“Some of the guidance counselors pick up for students in their schools because the parents can’t make it or they’re working,” she added.

Diana Englese is a guidance counselor at the Lincoln School. She showed up at the Holiday Toy Drive to fill a sack with gifts and tote it back for her kids. “It’s going to the students that the teachers told me may not have any gifts for Christmas,” she said. “I’m going to go to BJ’s right now for wrapping paper.”

Residents had a wide selection to choose from – everything from board games to Star Wars action figures to full sized bicycles. As for any toys that weren’t picked up as holiday gifts, there were plans for those, too.

Hot meals for the holidays

In addition to toys for the kids, the program coordinated meals for seniors and needy families.

“We have 400 meals for the seniors,” said Focaraccio. “We have 250 chickens and bags of groceries to go along with them.”

“Most of the food was donated by CarePoint,” she said. “And then the rest was collected throughout our food drive.”

La Frieda Meat Purveyors and Rabelo’s Meat Plus also donated food, with a donation from the Nicholas J. Sacco Foundation.