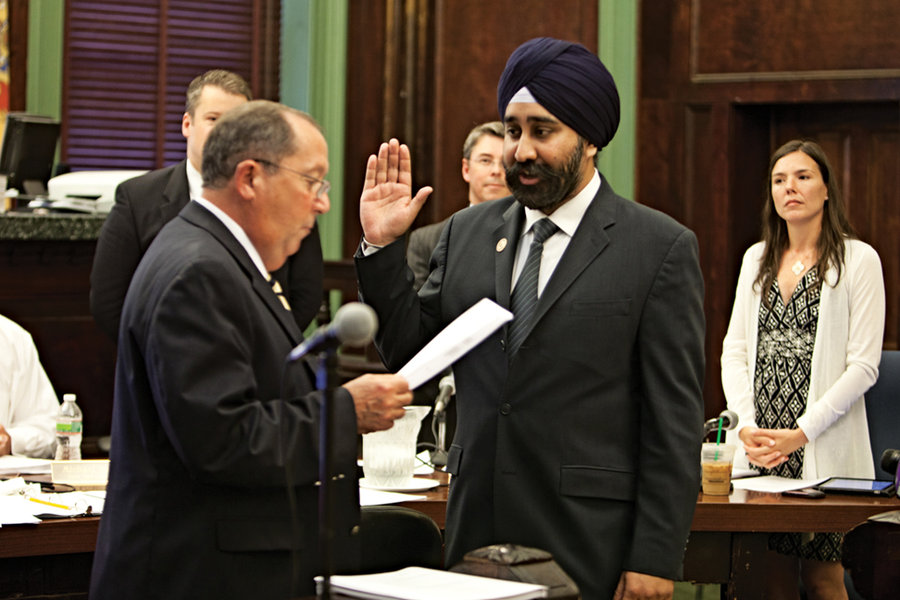 Did Councilman Ravinder Bhalla violate a state ethics law when he voted in 2010 to award a city contract to a lawyer with whom he shared an office lease?
In 2013, the New Jersey Local Finance Board ruled that Bhalla did, in fact, violate the law. Then, in September of 2014, an administrative law judge found that Bhalla had committed no wrongdoing. But on Dec. 12, 2014, the board issued a final agency decision upholding its original ruling.
The board has assessed Bhalla a fine of $100, but has waived payment because there is no state precedent for an ethics violation arising as a result of a shared lease.
Bhalla has pledged to fight the ruling in court, calling it “perplexing.”
At the time of his 2010 vote, Bhalla asked the city’s attorney at the time, Michael Kates, whether he should vote on the matter. Kates asked if Bhalla and his office mate had a personal or financial relationship with that would preclude Bhalla from objective assessment. Bhalla said no, and Kates told him he did not have to abstain.
However, a subsequent written opinion by Kates stated that he believed that Bhalla and his office mate had separate leases.

The appearance of a conflict

The issue arose in 2010 when the Hoboken City Council voted unanimously to reappoint Paul Condon as the city’s representative in several police disciplinary issues. At the time, Condon and Bhalla worked out of a law office on Newark Street, where they maintained separate practices but shared a lease with “joint and several liability.”
The crux of the case is whether the financial obligations of Bhalla’s joint lease with Condon would be reasonably expected to impair his judgment.
The state Local Finance Board, which rules on certain municipal issues, said in 2013 that they did. They issued a preliminary Notice of Violation against Bhalla in July of that year.

The Dec. 12 decision was signed by Local Finance Board Chair Thomas Neff. “The terms of the lease definitively bound [Bhalla] into an indirect pecuniary and personal interest in the solvency of Condon’s legal practice,” wrote Neff, “in that petitioner would be liable for the full cost of…the joint lease were the financial circumstances of Condon’s practice diminished to such an extent that he would be unable to pay his share of the rent.”
This same argument was scoffed at by Judge Geraghty is his ruling. Geraghty said the idea that not granting Condon an extension to his city contract would cause him to default on his rent payments was “fanciful,” “illogical,” and “unsupported by any credible evidence.”
But Neff emphasized that the mere appearance of a conflict was enough to create a violation of state ethics law.

The Local Finance Board also criticized Judge Geraghty for focusing on the person who made the complaint, Belfiore, noting that an ethics violation is an ethics violation regardless of the motives of the person bringing it to light. In its final decision, the Local Finance Board struck all discussion of Belfiore’s intentions.
“The board does not consider a complainant’s motivation in filing a complaint when reviewing allegations of violations of the Ethics law,” it wrote.
Belfiore, too, has said his complaint against Bhalla was factual, regardless of any political context.
Belfiore is a sometime critic of the administration of Mayor Dawn Zimmer, with whom Bhalla is allied.

Bhalla recently retained a spokesman, Ray Smith, a former staff writer at The Hoboken Reporter. Some speculate that Bhalla will run for state Assembly in the Democratic primary this June, as he did in 2013.
Smith said that Bhalla has already filed an appeal in the Appellate Division of the Superior Court of New Jersey.
One key point Bhalla hopes to raise is whether the Local Finance Board followed its own rules in reaching a final decision. Under state law, the board had 45 days to respond or Geraghty’s decision would become final.
According to the Local Finance Board decision, the Office of Administrative Law issued an extension giving the board until Dec. 18 to render a ruling.
But Smith says the board never discussed Bhalla’s case at either its November or December regular meeting. He questioned whether the board had ever discussed or voted on Chairman Neff’s Dec. 12 decision.
Bhalla will also question whether “Chairman Neff and/or the Local Finance Board has the legal authority to reject a decision by Judge Geraghty.”
However, Geraghty’s own opinion states his “recommended decision may be adopted, modified, or rejected by the Local Finance Board…which by law is authorized to make a final decision in this matter.”
Hoboken’s Corporation Counsel Mellissa Longo will continue to represent Bhalla in his appeal, as she did in oral arguments before the Office of Administrative Law this past July.
Smith said the city’s representation of Bhalla would incur “zero additional taxpayer expense,” because the matter is being handled in house by the city’s Law Department rather than through an outside counsel.
According to Smith, the city has “a legal duty to defend Councilman Bhalla because he was acting in his official capacity.” Additionally, said Smith, the city is defending its former Corporation Counsel Michael Kates, upon whose legal advice Bhalla relied.

Bhalla has been accused of other ethics issues during his tenure on the council. Among them, in 2010, NJ.com reported that Bhalla’s then-law firm had not submitted three years’ worth of required forms to the state Election Law Enforcement Commission. When asked about the forms by reporters, Bhalla initially said he wasn’t required to submit them. Then he said he had no knowledge of the form. After that, he filed the requisite documents the following day and apologized.
His law firm also has contributed money to groups associated with New Jersey politicians, then received contracts from those politicians. In July 2008, Bhalla’s firm won a $54,400 contract from the city of Newark one month after it made a $2,500 contribution to a political action committee (PAC) affiliated with Newark Mayor Cory Booker.
In 2007, Bhalla’s firm was awarded a $240,000 contract by Union City. The next year, it gave $2,350 in donations to a PAC in support of Union City Mayor Brian Stack. Bhalla’s firm subsequently received another $127,000 contract from Union City.
Bhalla responded in the past to those stories by maintaining that none of the contributions were unethical or violated state pay-to-play laws.
In September, Bhalla said, “Ever since I got elected, there have been certain individuals who have been trying to destroy my reputation.”